This report is part of AOAV’s investigation into the DoD’s small arms expenditure during the War on Terror. Our research found many discrepancies between the contracts published on the DoD’s website and those found on the Federal Procurement Database System- research that can be read here. For information on what a small arm is, please see here. To understand more about US DoD contracts visit here. The investigation also included an examination of US expenditure for small arms for Iraq, which can be read here, and Afghanistan, see here.

In January 2009 the Government Accountability Office (GAO) issued a Report to Congressional Committees on Afghanistan Security. The report was concerned about the amount of small arms and light weapons the US Army Security Assistance Command (USASAC) and the Navy had procured for the Afghan National Security Forces  (ANSF). They estimated the USASAC and Navy had spent $120 million to procure these weapons for the ANSF prior to 2009. There main issue with this procurement was whether the Department of Defense (DoD) could account for these weapons in Afghanistan.

What is concerning is that approximately 87,000 (36%) of the weapons in total are said to not have complete records – 46,000 without serial number, 41,000 (of those with serial numbers) without location or disposition. The Combined Security Transition Command-Afghanistan (CSTC-A), who are responsible for the 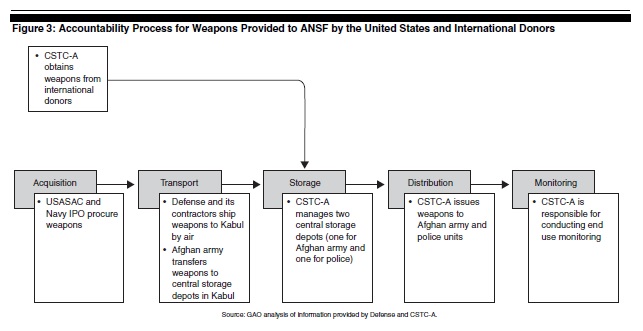 maintenance of records and monitoring weapons in Afghanistan through the accountability process , also did not maintain reliable records for any of the weapons obtained through international donors from June 2002-June 2008 – about 135,000 weapons, of which 79% (106,650) were AK47s. There laid a particular danger in the absence of end use monitoring.

On the ANSF end – despite efforts of the CSTC-A to train the ANSF safeguarding and accounting for weapons – the accountability for ANSF weapons is very weak.  This is said to be due to a variety of reasons from cultural and institutional problems and unclear guidance, to illiteracy, corruption and desertion. This has meant incomplete and inaccurate records and has meant that loss, theft or misuse was unlikely to be detected.

Furthermore, the weapons depots seem to lack the appropriate security given the items stored and the insecure environment. This lack of security and appropriate accountability measures for weapons and other sensitive equipment, such as night vision devices, makes them vulnerable to theft and misuse – a danger to the public, as well as the US and coalition forces. Since the investigations began, steps were taken to improve accountability and it was hoped that improvements, such as establishing clear accountability procedures, would be put into action. 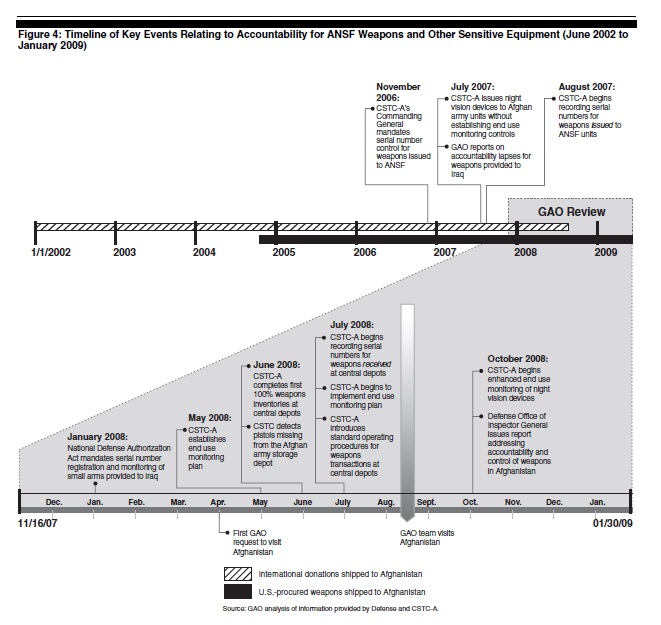