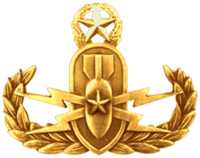 The EOD units from the US Navy are responsible for responding to any type of ordnance, and they receive specialized training on how to handle improvised, chemical, biological and even nuclear weapons.

The EOD technicians investigate and demolish natural and man-made underwater obstructions, prepare coastal regions for amphibious landings, warn about potential threats – both in the United States and abroad. Ultimately, their job is to ensure the secure disposal of explosive weaponry.

The Navy teams provide assistance to other areas of the armed forces, such as the Marines, and Army, as well as to the Navy. They also work with elite units within SOCOM, Federal Law Enforcement, Secret Service, other agencies within the Homeland Security Department as well as US foreign allies around the world.

Their work may consist of checking piers for IEDs prior to groups pulling into port, or providing the C-IED capability on combat patrols.

They also have expertise in post-blast investigations and conduct research in order to better respond to the IED threat and develop mechanisms with which to tackle them. The EOD technicians are trained in some of the most up-to-date C-IED technology and techniques.

The EOD teams were deployed as part of the Combined Joint Special Operations Task Force – Afghanistan (CJSOTF-A). As part of the operations in Afghanistan the Navy delivered strategic and tactical recommendations to the Special Forces officers in Afghanistan, to ensure soldiers conducted safe operations, even in the most heavily IED saturated part of Afghanistan. They would analyse IED attack data to implement C-IED tactics.

The units were also involved in operations in Iraq, Somalia, Haiti, Bosnia and Kosovo.