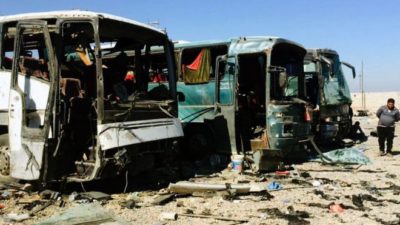 On Sunday, November 9th 2016, IS carried out suicide attacks in Tikrit and Samarra, killing at least 25 and wounding over 100. In Samarra, 11 Shia pilgrims were killed as suicide bombers targeted a crowd gathered at a religious shrine – over 100 were injured. In Tikrit, a suicide bomber detonated their explosives at the entrance to the city Sunday morning during rush hour – killing 13.

Both attacks were carried out using explosive-laden ambulances – a modification to the lethal truck bombs often used by IS. The use of ambulances has been internationally condemned as their use will make it more difficult for such vehicles to respond to emergencies as they are now under suspicion.

The attacks are thought to be a response to the groups loss of ground in Mosul. Other smaller attacks took place in Baghdad, killing at least 10 and wounding 21. It is suspected that these were carried out by IS as well.

On July 3rd 2016, a lorry packed with explosives was used in one of the deadliest attacks Iraq has seen, when it an IS suicide bomber detonated in the busy commercial area of the predominantly Shia district of Karrada, killing 324.