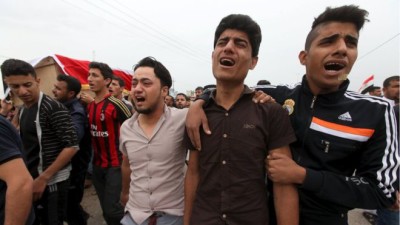 Last Friday – 25 March, 2016 – saw Iraq’s capital, Baghdad, face yet more violence at the hands of ISIS suicide bombers. The attack took place when a suicide bomber detonated his vest as trophies were being handed out at the end of a football match in the mainly Shia town of Iskandariya, just south of Baghdad.

The attack, which killed 41 and injured a further 105, has been claimed by the terror group ISIS. They said the intended targets were Shiite militiamen. This is in line with previous attacks, for Shia populations have been a central target for the predominantly Sunni group. Other ISIS attacks on Shiite targets have included bombings at a Shiite mosque and suicide bombings in marketplaces. These targets can also be termed “soft targets”, where the casualties are likely to be civilians. When explosive weapons are used in markets, for instance, AOAV’s data shows that the vast majority of victims are civilians – 99%.

From January to the end of March, 2015, AOAV’s Explosive Weapons Monitor has recorded 48 incidents in Iraq accounting for some 927 civilian deaths and injuries. Of these incidents, 8 were suicide bombings. Suicide bombings particularly, are extremely lethal and are seeing wider and wider use. AOAV’s Explosive Violence Monitor 2014 found that of all IED attacks, the ones that posed the most danger were suicide attacks.

Baghdad has long been a hotspot for death and destruction. Of the incidents recorded in Iraq this year 12 – one quarter – have taken place in Baghdad province. These 12 incidents account for over 50 percent of all recorded civilian deaths and injuries. In 2015, AOAV’s Explosive Weapons Monitor recorded 3,145 civilian deaths and injuries in Baghdad province alone.