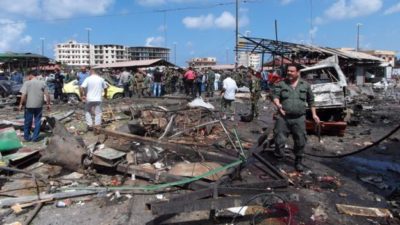 On Monday, May 23rd 2016, the cities of Tartous and Jableh, along the coast of Syria, were confronted with multiple attacks.

Seven blasts in total were reported; three in Tartous and four in Jableh. The violence is said to have killed at least 148 and injured at least 200.

The attacks in Tartous on Monday are said to be the first of their kind.

Both Tartous and Jableh are predominantly home to those of the Alawite minority, though the presence of other sects has increased in these cities as many flee from more violent areas of the country. Alawites, though a minority, hold many positions of power within Syria, including presidency – Assad and his family are Alawites.

ISIS claimed to have perpetrated the attacks through their media outlets. ISIS stated that they hoped to kill Alawites in the attacks, whom they believe to be heretics.

In retaliation to the bombings, it was said by the Syrian Observatory for Human Rights, that government supporters attacked an area of Tartous where internally displaced Syrians have been hosted. Fortunately, nobody was killed.

However, the explosive violence perpetrated by ISIS this year has already increased. 697 civilian deaths and injuries were caused by explosive violence perpetrated by ISIS in the first three months of 2016 alone. 686 were caused by seven IED attacks. The attacks this year also demonstrate an increased lethality, with an average of 98 civilian deaths and injuries per incident.