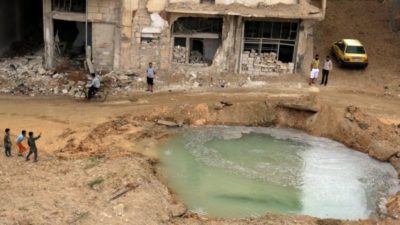 Air strikes continued to pummel rebel-neighbourhoods in Aleppo city and across the surrounding countryside over the weekend. Over 500 civilians were killed and injured by air-launched weaponry between Friday and Sunday.

The air-launched explosives were reported to have consisted of barrel bombs, cluster bombs, phosphorous, napalm, and bunker bombs.

On Sunday alone, 85 were killed and 300 injured in rebel-held eastern Aleppo.

The air strikes have targeted civilian areas, such as commercial and residential areas. Many first responders have been injured by further air strikes as they respond to attacks.

The destruction has blocked roads, preventing fire trucks and ambulances reaching those in need. Many remain trapped beneath the rubble for hours and hospitals remain overwhelmed with patients.

It was reported that only 20 doctors remain in eastern Aleppo and they are exhausted.

Attention has been drawn to not only the physical impacts of airstrikes and the sustained attacks, such as death, injury and malnutrition, but also the psychological impacts, including an increased rate of child and young adult suicide.

AOAV strongly condemns the use of violence against civilians and calls upon all groups to reject the deliberate targeting of civilians. The use of weapons with wide-area impacts should also remain of concern; due to the severe impact these have on civilians. All actors must urgently address the civilian harm in Syria. The situation in Syria requires an urgent response to prevent further suffering of Syrian civilians, who have for too long borne the impact of the violence in their country. AOAV encourages states to reinstate the ceasefire so aid may safely enter and further civilian harm can be prevented.