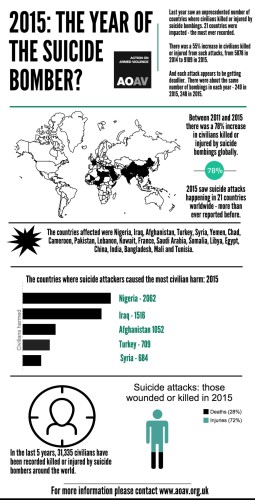 2015 was, it might be said, the year of the suicide bomber. A year where 9,109 civilians were reported killed or injured by suicide attacks; where 248 incidents saw lives shattered in mosques and markets, checkpoints and restaurants around the world.  A year where 21 countries saw men and women blow themselves up in a rising tide of violence that seems to be spreading by the day.

The growing cult of the suicide bomber is a reality that urgently needs to be addressed. For the last five years the charity I work for – Action on Armed Violence (AOAV) – has been charting the harm caused by all forms of explosive weapons around the world. In 2011, when we started our monitor of global news reports, there were 5,107 civilians reported killed or injured by suicide bombers around the world.  Last year that figure was up 78%.

Admittedly, it was not the worst year for victims of suicide attacks on record – 2007 was.  That year, according to the Chicago Project on Security and Terrorism, some 20,400 people were killed or injured by suicide attacks. But in 2007 the vast majority of these were in Iraq and Afghanistan; suicide bombs were recorded in just 12 countries.

2015, on the other hand, showed places previously untouched by suicide attacks. Chad was targeted for the first time (459 civilians killed or wounded).  As was Cameroon (431). And Nigeria’s civilian death and injury rate (which, at 2,062, was the most worldwide from suicide bombings) was 14 times that of 2011.

Last year also showed another trend; that of the suicide vest as the explosive weapon of choice by terrorists.  Last year, according to AOAV’s data, suicide attacks constituted 56% of the 16,180 civilians killed or injured by improvised explosive devices (IEDs) worldwide – including things like car bombs and road-side bombs.  In 2011, it was just 38% (5,107 of 13,336).

What is clear is that the people suffering the most are Muslims. Most of the 22 countries hit were majority Muslim, and most of the perpetrators were doing so in the name of Islam.

What is less clear, though, is what is being done by the international community to stem this rising tide.

There are, admittedly, no easy fixes. Last year, when Mozambique declared itself free of land-mines, you saw the remarkable end result of a coalition of states and charities at work. But improvised explosive devices that are command-detonated (when the user decides to explode the device) are not prohibited under the Mine Ban Treaty.

There are no legitimate suicide vest factories that can be shut down by governments. The materials used in suicide bombs often have additional, legitimate uses – such as fertilizer – so banning the precursor explosive materials that make up suicide vests is impractical.

It is true that some states are waking up to the need for a multi-national, multi-layered response to address the problem. Last year, an Afghan resolution was adopted at the United Nations General Assembly, aimed at countering the threat of IEDs. It called for information sharing, and a comprehensive approach to countering the growing threat.

France also led the way in the disarmament forum of the UN’s Convention on Certain Conventional Weapons in Geneva, hosting side events focusing on this very issue.  And last year Australia ran a global summit of police, intelligence services and military leaders in Canberra, again seeking ways to combat the threat.

But these approaches are currently under-funded or are in danger of repetition and a lack of co-ordination. Innovative approaches are also needed to address this complex threat. Aerial strikes on Islamic State targets are not going to stop the spread.

Of course, it would help if more states condemned the use of explosive weapons in populated areas. Certainly the UN Secretary-General has done this.  And around 50 countries have also publicly expressed concern about this humanitarian issue. Last September, Austria hosted a meeting for states with an eye towards developing an international political instrument to reduce harm from the use of explosive weapons. This includes stopping using them in populated areas.

This week, the UN Security Council will held its open debate on the protection of civilians in armed conflict. Now, more than ever, is the time for states to acknowledge that suicide attacks are spreading fast.

They need to fund a coordinated response to address suicide bombs. They need to ensure that explosive munitions stockpiles are properly regulated; to offer assistance to the civilians whose lives have been shattered by this pernicious weapon; to engage with religious leaders, charities and other groups to find out ways to stigmatise their use; and to ensure a co-ordinated response to transnational smuggling networks.

But they also need to condemn the use of explosive weapons with wide area effects in populated areas. That, at least, would be a start.