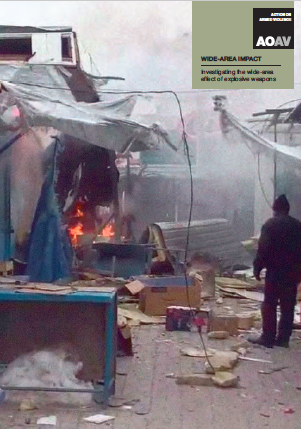 Of all the findings in Action on Armed Violence’s global monitor of explosive weapon harm, one thing stands out.  That when explosive weapons with wide area effects are used in populated areas, the vast majority of those killed or injured will be civilians.

This hard truth is seen across time and space – from Syria and Ukraine to Nigeria and Yemen. Between 2011 and 2014, AOAV recorded a total of 144,545 deaths and injuries from the use of explosive weapons like aircraft bombs, rockets and mortars. Of these, 78% were reported to be civilians.

To help policy-makers, journalists and others interested in the humanitarian harm of explosive weapons, understand this pattern of harm more fully, AOAV has published a report – Wide-Area Impact. It looks in detail at three distinctive weapon explosive weapon types; the impact of air-dropped bombs in Yemen, mortar attacks on the Syrian-Jordanian border and multiple-rocket attacks in Ukraine. We use such case studies to explore how the technical characteristics that give a weapon wide-area impacts translate into severe and long-lasting civilian harm on the ground.

Yemen – Paveway air-dropped bombs
In Yemen, AOAV looked at weapons that have a wide-impact area impact because of the large destructive radius of the individual munition used. In this case we look at the Paveway air-dropped bomb series. Our report covers:
– An overview of air-dropped bombs by the Saudi-led coalition in Yemen;
– A case study of an ariel strike on a Yemeni family home;
– An examination of certain air-dropped bombs, with a focus on the Mark 80 series with Paveway attachments (with technical details);
– An infographic and video of the guided Mark 80 series in action, with additional eye-witness testimony from Iona Craig – AOAV’s researcher on the ground.

Ukraine – multi-launch rocket systems
In Ukraine, AOAV examined weapons that have a wide impact area because the weapon system itself is designed to deliver multiple munitions over a wide area. In this case, we look at the Grad multiple rocket series. Our report covers:
– The use of multi-launch rocket systems in the Ukrainian conflict;
– A case study of Grad rockets killing dozens of civilians in an attack on the Eastern European town of Mariupol in January, 2015;
– An analysis of the Grad rocket system, with an accompanying  video and infographic;
– Details of a particular strike and a map of where one salvo of 40 of the Grad rockets landed in Mariupol.