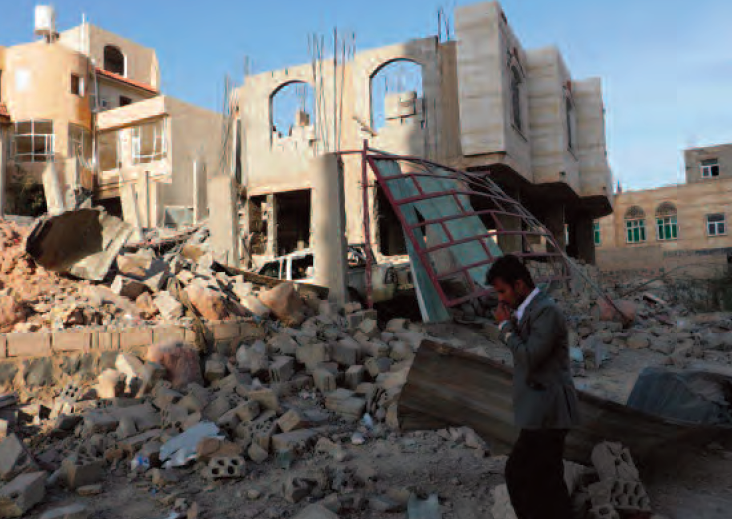 Below are the conclusions and recommendations of an AOAV report that analyses the wide area effects of certain explosive weapons and the concern about their use in populated areas.  The report –Wide-Area Impact – can be read here.  AOAV’s investigation covered the impact of air-dropped bombs in Yemen, mortar attacks on the Syrian-Jordanian border and multiple-rocket launched attacks in Ukraine.

CONCLUSIONS
All explosive weapons affect an area. The use of any explosive weapon in a populated area thus puts civilians at significant risk of death and injury and should be avoided.

Many explosive weapons affect a wide area; either because they have a large destructive radius, are delivered without accuracy, or are fired in multiple munitions. Some weapons, like the Grad rocket, combine all three characteristics. The example munitions highlighted in this report are intended to be indicative. Their characteristics are common to many bombs, rockets, and shells made and used by governments and armed actors around the world.

Crucially, efforts to tackle one factor (i.e. improving accuracy) cannot alone remove the risk to civilians when these explosive weapons are used in populated areas. The use of precision-guided aircraft bombs may reduce one aspect of threat, but if the weapon in question has a large destructive radius it will still have a wide-area impact that puts civilians at grave danger when the weapon is used in a village, town or city.

AOAV’s previous research has shown the importance of strong, progressive rules of engagement in shaping how explosive weapons are used. In many ways, these are the most impactful practical measures a responsible state actor can take to reduce the impact of these weapons on civilians.

The cases told here from Yemen, the Syrian border and eastern Ukraine are all part of a widespread pattern of harm. AOAV’s research in the past five years has shown that the use of explosive weapons with wide-area effects is all too common within populated areas, by a range of state and non-state actors alike.

Explosive violence is a global problem and it requires global action. The case studies highlighted here show clearly why governments are right to be concerned with the issue of explosive weapons with a wide area impact. More than 50 governments have now spoken out against the problem of explosive weapon use in populated areas. On 21-22 September 2015 a group of governments, UN agencies and civil society organisations affiliated with the International Network on Explosive Weapons (INEW) met in Vienna to discuss how the harm from these weapons could be prevented. Representatives there took the opportunity to express support for developing a political commitment to tackle the issue.

It is a hugely positive moment and one that points towards a more positive future where these cases are harder and harder to find. AOAV is a founding member of the International Network on Explosive Weapons, and warmly welcomes efforts to develop a political commitment to end the use of explosive weapons with wide area effects in populated areas.

– States and other actors should stop using explosive weapons with wide-area effects in populated areas.

– States should work together with international organisations and civil society to develop a political commitment to refrain from using explosive weapons wide-area effects in populated areas.

– States should review national policies and practice and share such information relating to the use of explosive weapons in populated areas, in response to the UN Secretary-General’s Note Verbale of 1 October 2014.

– States and international organisations should publicly condemn the use of explosive weapons in populated areas.

– States and all users of explosive weapons should work towards the full realisation of the rights of victims, including those killed and injured, their families, and affected communities. They should strike to ensure the timely and adequate provision of needed services for the recovery, rehabilitation and inclusion of victims of explosive violence, without discrimination.

– States, international organisations and civil society should work together to collect and make available information relating to the civilian harm from the use of explosive weapons, including gender, age and disability disaggregated data, to better understand the impacts of such use.

– In light of the widespread harm caused by these weapons to civilians, states manufacturing and exporting these weapons should seriously consider refusing or revoking licenses of arms to contexts where such harm could equate to serious violations of international humanitarian or international human rights law, in line with their obligations under the Arms Trade Treaty.