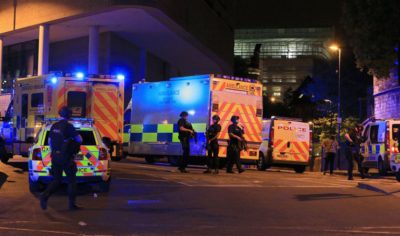 Update: Whilst the death toll remains at 22, the number of injured was later reported to have reached more than 200.

Yesterday, May 23rd 2017, a suicide bomber targeted fans leaving a concert in Manchester, in an attack that left at least 22 dead and 59 injured.

Many of the casualties were children and young adults who had been at an Ariana Grande concert, that ended moments before the blast, which took place at 10.33pm in the Manchester Arena foyer.

The blast was said to scatter nuts and bolts across the floor, suggesting these were used in the improvised explosive device (IED) used by the bomber.

As people reacted to the blast, many in their panic rushed towards exits separating children and parents – some children remain missing.

Little is yet known about the bomber, other than that he killed by the IED he detonated. Police and security services are investigating whether the bomber was part of a network or working alone.

The death toll makes this the worst attack of its kind in Britain since the 7/7 bombings in 2005, which killed 52 people on London’s transport network.

Action on Armed Violence (AOAV) has been monitoring explosive violence harm across the globe since 2011. Last year, AOAV recorded 12,673 deaths and injuries from 256 suicide bombings reported in English-language media – it was the worst year yet for casualties from suicide bombings. Of these, 9,680 of those killed and injured were civilians (76%), representing a slight rise of 5% from 2015, or a 90% rise since 2011.

On average, 38 civilians were killed and injured by each suicide bombing – two more than in 2015, when the average was 36.