Home / AOAV: all our reports / Somalia

On Saturday, October 14th 2017, twin bomb explosions targeted the Somali capital, Mogadishu. The death toll has continued to increase since the blast, with it now standing at over 300.

However, the total may still rise as over 300 civilians were also reported injured on Sunday and bodies continue to be pulled from the rubble – many of those in critical condition. About 40 are said to have injuries too severe to be treated in Mogadishu, and were being airlifted to Turkey for treatment. 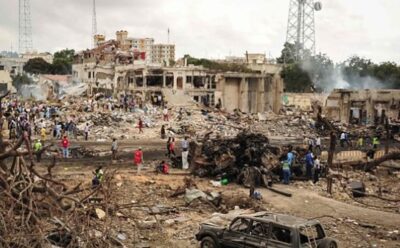 Whilst no group has claimed responsibility for the attack, it bears all the hallmarks of Al Shabaab, who carry out regular strikes on the Somali capital.

On Sunday, the Somali President declared three days of national mourning, and called for citizens to help those impacted by donating blood and comforting the bereaved. Hundreds of people also took to the street to protest.

The truck bomb that struck outside the Safari Hotel was reported to have been packed with several hundred kilograms of both military-grade and homemade explosives. It was also said to contain cooking gas, giving the device an incendiary effect, leaving many badly burnt, and bodies charred beyond recognition.

Whilst the truck bomb caused by far the majority of casualties, two people were also killed in a second bomb attack in the Madina district of the city.

Action on Armed Violence (AOAV) recorded a 132% increase in civilian deaths and injuries from improvised explosive devices (IEDs) in Somalia in 2016, compared to 2015. Almost 70% of these attacks took place in the capital, Mogadishu.

In the last six years, when IED attacks have been claimed, Al Shabaab has stated responsibility for 100% of the incidents.