On Monday, August 21st 2017, a US-led coalition airstrike struck several densely-packed neighbourhoods in Raqqa, killing at least 42 civilians. Amongst those killed are 19 children and 12 women. 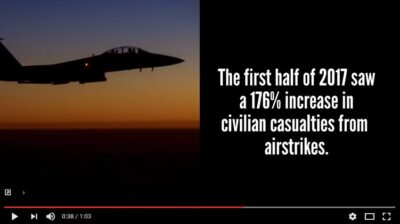 It is estimated that 25,000 civilians remain in the city, where ISIS control approximately 40% of the territory at the heart of Raqqa.

The US Central Command (CENTCOM) said it would assess the allegations. Whilst the coalition is said to take many measures to avoid harm to civilians, ISIS are known to use human shields.

Action on Armed Violence (AOAV) records the harm caused by explosive violence across the globe according to English-language media sources.

In the first half of 2017, Syria has seen an 82% increase in civilian deaths. As is the case with these latest airstrikes, the injuries, of which there are sure to be many, are rarely recorded.

AOAV calls upon states to recognise the civilian impact of explosive weapons with wide-area impacts, which all too often result in the death and injury of scores of civilians.

The International Network on Explosive Weapons (INEW), of which Action on Armed Violence (AOAV) is a member, released a briefing paper this week, ‘The use of explosive weapons in populated areas and the protection of civilians’ which calls for immediate action to prevent human suffering from such violence.