Significant developments have been made with national, bilateral, regional and international C-IED initiatives, particularly in regard to military efforts and the progress in information sharing. However, there are still considerable shortcomings in C-IED. Evidently, the networks creating IEDs still demonstrate better information sharing than those trying to stop them do. The increased lethality of IEDs is becoming a global problem. 2015 saw more countries impacted by suicide bombings than ever before. It is clear that there is still much more to be done to effectively combat IED harm, and it becomes ever more apparent that a more collaborative holistic approach is required. 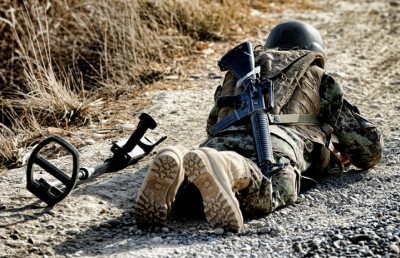 Whilst bilateral, regional and international efforts have engaged national forces that have requested such assistance in C-IED training, many of these highly impacted nations have still been left without the adequate resources to carry out C-IED effectively. Many are without basic C-IED equipment, funds for personnel, or even basic resources such as electricity. Those engaged in training and assisting impacted nations should ensure that the training they are given is compatible with the resources available or that actions are taken to ensure they receive the resources required to carry out C-IED effectively. The lack of resources has meant that in some cases, despite training, the task of search and clearance has often been left to international actors or private companies. Occasionally, it has even been ignored, leaving contaminated areas – homes, roads and other land – untouchable; leaving a devastating impact on lives and economies.

Victim assistance, especially for those psychologically impacted, remains largely ignored. Some small-scale studies have been conducted and some assistance has been provided to military personnel, but when civilians are increasingly becoming the target, far more needs to be done in this area for all those impacted.[i] Psychological impacts may be less visible but are important to address, especially when a conflict-inflicted area is looking to develop stability and peace. This support may help combat the culture of fear caused by the use of IEDs – a fear that terrorist groups can manipulate.

Many national efforts have been taken to counter violent extremism, focusing on religious, community and educational institutions. These are often targeted at the youth, and increasingly those that have already carried out extremist acts. More recent initiatives in the international realm have also sought to facilitate counter-extremism efforts. Such efforts include the King Abdullah Bin Abdulaziz International Centre for Interreligious and Intercultural Dialogue (KAICIID), an initiative that seeks to cross faith boundaries and encourage understanding and tolerance.

When it comes to regional and international efforts, what is clear is that many of the utensils available to the international community are being left unharnessed or unimplemented. Within civil society and private businesses, there are information databases that could aid substantially with C-IED work. However, such information often remains disaggregated or overlooked.[ii] The most successful C-IED initiatives are those that are working collaboratively, such as the MNJTF or PGS, though many of those are struggling due to funding.

Despite a wide acceptance that some information on an IED event may have to remain classified for security reasons, there is also a growing sense of frustration that this principle is too deeply rooted in the psyche of many nations and C-IED actors, and that this unnecessarily prevents C-IED progress. Even whilst conducting the research for this report, much resistance was encountered to sharing information, even upon seemingly unsensitive information. Vice Chief of the Australian Defence Force, VADM Ray Griggs, gave a speech to the International Counter-Improvised Explosives Device Leaders’ Forum, in which he called for a re-balancing of these principles, with more weight being given to the information sharing based on greater understanding of the actors involved and the threat being faced.[iii] C-IED actors must imaginatively reassess what they do and do not share, and be better prepared to engage in information sharing.

A priority for information sharing must be the communication of share purchase information of large and suspicious transaction of dual-use precursor materials between countries, law enforcement and industries involved. As efforts to secure stockpiles and ERW/UXO have greatly improved, terrorists are increasingly using commercially manufactured materials that allow them to build more sophisticated IEDs on a larger scale.

The C-IED efforts of the international community are progressing, and new initiatives do seek to build on previously learnt lessons. The initiative of the International C-IED Leaders’ Forum is an example of this, where new efforts seek to provide a holistic approach to C-IED with the involvement of a range of actors involved in all strands of C-IED. It is hoped that all C-IED initiatives recognise their interconnectedness with other areas of C-IED and seek to build cooperative and coordinated efforts to tackle the IED scourge.

[i] Improvised Threat Management, private C-IED focused company, expressed in a questionnaire response that they conduct research in the psychological impact of IEDs. The findings of which, though difficult to find, have been disseminated through articles on social media.