The responses that have been developed to mitigate the harm caused by IEDs are diverse; a diversity that is essential given the multi-faceted nature of the problem. The various efforts that seek to mitigate IED harm are often collated under the broad heading of counter-IED (C-IED). There are many actors that seek to mitigate IED harm, from governments, military, police, customs and other law enforcement to NGOs, private companies and other civil society actors. Whilst military and law enforcement tend to tackle the immediate IED threat through “defeating the device” and “training the force”, other civilian efforts look to prevent IED use and mitigate the impacts after their use. Defeat the device includes taking measures to mitigate, detect and neutralise IEDs, whilst the training the force approach sees forces provided with C-IED understanding and effective organisation to provide C-IED capability. All of these may be considered C-IED efforts as they reduce the harm of IEDs and can contribute to decreasing their attractiveness to their users. 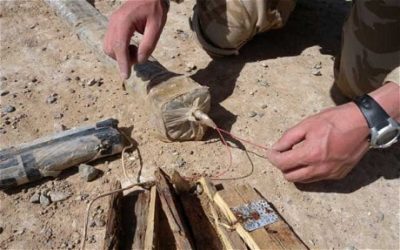 It should be noted that C-IED involvement may be a politically sensitive issue for some NGOs and international actors who must remain neutral. Often work that may assist in combating IEDs, is considered under another name to make it clear that their work comes under efforts that are seen as less controversial, such as EOD and mine action.

To combat IEDs, unlike other explosive hazards, it is vital to consider the “dynamic dimension of the threat, including perpetrators and also its root causes”. C-IED must go beyond the necessary task of detecting and destroying IEDs and seek, as well, to target the root of IED harm, examining why and how IEDs are used and responding to the answers.  In short, to comprehensively combat IEDs, there must also be preventative strategies in place.

Military efforts also recognise an attack the network approach. This aspect of C-IED acknowledges that whilst the weapons are “improvised”, the groups constructing them often receive substantial financial assistance and have access to expert networks and advanced bomb-making facilities. The largest users of IEDs are internationally connected extremist groups, such as IS and al-Qaeda affiliates, who are connected with groups and individuals across the globe. The attack the network approach recognises the necessity of a joint, interagency and multinational approach and is driven by intelligence that seeks to understand tactics and techniques and prevent IED attacks by tackling the root causes.

Many types of C-IED actors, from militaries to governments and civil society, now seek to target the groups, the financers, and the trade in explosive materials that IEDs depend on. These C-IED efforts focus on research, intelligence gathering and information sharing. As such, they require high levels of international cooperation and global engagement, engagement that goes beyond what military and law enforcement can often provide – or, at least, are willing to share. A focus on this aspect of C-IED also helps states disrupt the sequence of events that lead up to the use of an IED, as well as providing a tactical focus for those engaged in operations on the ground.

Other preventative attack the network C-IED actions may include demining, EOD and stockpile controls to prevent terrorist groups fashioning IEDs from these materials, as well as programs to counter violent extremism or rehabilitating captured terrorists. Many programs target those more vulnerable to radicalisation and recruitment and provide strategies to counter extremist messages.

The last decade has seen many nations improve and broaden their C-IED capabilities and initiatives. Alongside these national improvements – often with the aid of others – there have been calls for more cooperation in C-IED. The national responses remain weak unless they are tied to bilateral, regional, and international approaches that mimic the very structures of those terrorist networks that pose the central IED threat.

What has become clear throughout the course of this research is that, for there to be a properly coordinated response to the global IED threat, police, customs, military, international services, UN bodies, civil society and even cultural representatives and influencers need to be brought to the table. Stronger collaborative ties need to be created, based on a relationship of trust and respect.

Below, this paper seeks to outline some of the national, regional and international C-IED initiatives that are already being implemented and their capabilities. The paper will draw on these examples to characterise C-IED successes and shortfalls. This will help identify where improvements can be made to aid future C-IED initiatives.