IEDs have global reach and threaten the security of states. However, whilst this is indeed the case, it is also true that there are a handful of states that are far worse affected than others. In fact, over the last five years, just five countries account for over three quarters of all IED attacks recorded by AOAV’s explosive violence monitor, namely: Iraq, Afghanistan, Pakistan, Syria, and Nigeria. IED use within these countries has dramatically shifted the nature of their internal and external conflicts.

This report looks at the states in the areas most impacted by IEDs that face a significant national threat from groups that use such weapons. The regions examined include: the Sahel, North Africa, and the Middle East. The report shall also look at four countries outside these regions due to their high number of IED attacks: Afghanistan, Pakistan, Kenya and Somalia. IED use within the states in these regions has meant that the brunt of the lethal consequences from IEDs have been borne by civilian populations. They have also significantly impacted the national and international actors who are working towards an end to conflict. In the last few years much has been done to tackle the IED threat within these nations: the aid of foreign militaries, humanitarian actors, and international organisations. This has resulted in many states engaging in bilateral, regional and international commitments, as armed forces and governments from developed nations seek to offer beleaguered nations expertise, equipment and monetary aid, and impacted nations seek assistance and aid. 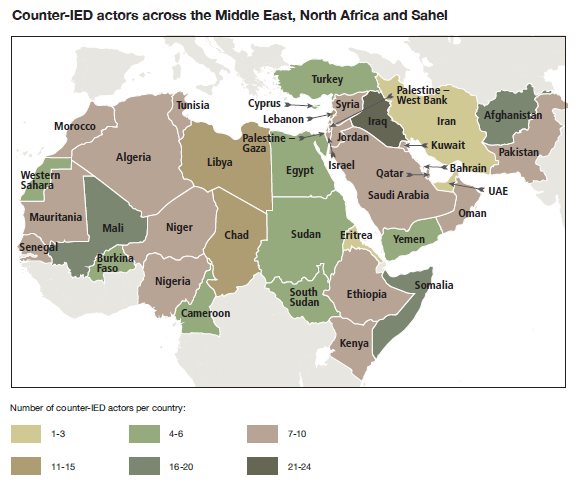