This report seeks to respond to the threat posed by IEDs (Improvised Explosive Devices) by investigating the C-IED (Counter-IED) initiatives that are being conducted around the world.  We specifically focus on three of the most-impacted regions: the Middle East, North Africa and the Sahel. The paper also identifies Afghanistan, Kenya, Somalia and Pakistan as four additional countries that are highly impacted by IEDs and therefore warrant examination.

The research was conducted over ten months and examined 39 countries in total. 227 actors engaged in C-IED throughout the regions are included in the report, whilst over 300 were examined globally in total during the course of this research. This makes this report the largest study of C-IED actors in these regions.

Our research finds that C-IED initiatives vary greatly from country to country. Not only were the typical ‘destroy the device’, ‘train the force’ and ‘attack the network’ approaches found, but efforts that fall under the banner of counterterrorism, demining and Explosive Ordinance Disposal (EOD) featured as well. Such efforts have the ability to greatly reduce IED usage, as well as serving to disrupt the networks that use them, and consequently were essential to incorporate.

As part of this research, questionnaires were sent out to actors within the C-IED field. Phone interviews were also conducted in order to understand the role of the various actors in the field and the situation in the countries in which they operate. Through the responses received, key challenges to C-IED operations were identified. These include inadequate resources, lack of awareness, lack of victim assistance programmes, and a general resistance to information sharing.

The IED threat and C-IED work in these regions were examined country-by-country. The national, bilateral, regional, and international C-IED initiatives that the state was involved in, or that were seen to be operating in the state, were assessed, as well as the NGOs and private actors working on such operations in the countries.

The research conducted on C-IED capacity in the Middle East showed that, whilst many of the states had received training focused on military and law enforcement, many were under-resourced. This effectively means that many states lack the equipment to adequately tackle their respective IED threat. For less-impacted states in the region, border security was understandably a top priority. Efforts to implement better border security often focused on a person-centric approach, which left customs vulnerable and allowed dual-use materials (such as fertiliser) to end up more easily in IEDs.

Similarly, North Africa’s C-IED efforts predominantly focused on military-based initiatives, whilst also leaving countries too under-resourced to carry out C-IED effectively. Unlike many other regions, there were some initiatives working on psychological victim assistance, an area of C-IED which often remains ignored. Other preventative measures such as terrorism financing and investigations were found to need more assistance in North Africa.

Countries in the Sahel region seem to be heavily reliant on external assistance from other nation states, international actors and NGOs. However, Sahelian states also, in general, seem to embrace support and utilise resources that other regions did not. For example, they were more welcoming of assistance from neighbour states and better at integrating C-IED strategies into communities than countries in the other regions examined.

The last group of nations examined included highly impacted states. Some of these nations have been impacted by IEDs for a long time, such as Pakistan and Afghanistan. Cooperation is essential between these states to prevent the use of the weapons in both countries. Knowing this, Afghanistan has been a strong advocate for cooperative techniques to tackle IED harm, not just in relation to the national problem but also on the international stage. In Kenya and Somalia, as in Afghanistan and Pakistan, the IED threat is one that needs a trans-border cooperative effort as the threat chiefly stems from al-Shabaab cells in both states. However, it is clear that Kenya has far greater capacity to combat IEDs on their side of border. Kenya also provides assistance to Somalia through the African Union’s military mission in Somalia, AMISOM.

After examining the various countries and regions, this report explores some of the leading regional C-IED initiatives, including regional military efforts (such as the Multinational Joint Task Force) as well as data collection and information sharing efforts. Regional efforts also sought to build regional capacity through training and cooperation. This section draws upon some of the initiatives already partially explored within the nationally focused section.

Lastly, this report reflects on the C-IED progress made on the global stage. Emphasis is initially placed on UN initiatives due to the recent successes of these programmes. Other initiatives of importance are also reflected upon to reveal the steps taken to generate a more rounded approach, highlighting the success of some of these initiatives, as well as emphasising where challenges remain. Information sharing is identified as one such area.

In conclusion, there are still many challenges that need to be addressed in the battle to combat the rising tide of IEDs. These include the provision of resources and equipment, victim assistance and information sharing. The report, to support this need, highlights past successes that might give insight on how to best meet these challenges. The paper also draws on the expertise of influential C-IED actors, and notes that many see greater information sharing as an important leap to be taken, as has been acknowledged throughout the report. The conclusion also recognises passages of progress where C-IED initiatives are building on lessons learnt to reinvigorate C-IED efforts internationally. 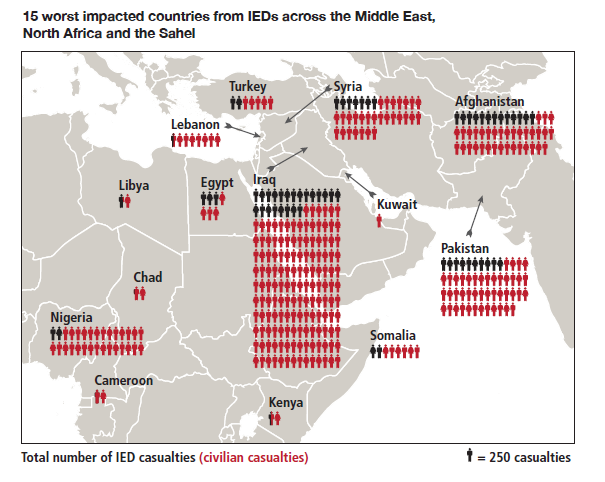 AOAV has been monitoring explosive violence for over five years. AOAV’s Explosive Violence Monitor records from English-language news reports incidents of explosive violence that have resulted in the death or injury of at least one person. Since AOAV began its record in 2010, the use of Improvised Explosive Devices (IEDs) and the civilian harm they cause has become ever more apparent. AOAV’s Explosive Violence Monitor recorded 6,320 IED attacks, that resulted in deaths and injuries, across 75 countries between 2011 and 2015 according to English-language media reports – at least five additional countries have witnessed such IED attacks this year. These IED attacks resulted in at least 105,071 deaths and injuries, of which 82% (86,395) were civilians. The civilian impact of IEDs is particularly concerning.  When an IED is used in an area where there is likely to be a high concentration of civilians, such as markets or residential areas, AOAV’s data shows that on average 91% of those killed and injured are civilians.

Whilst it remains the case that some countries are far more impacted than others, due to the IEDs lethality and their relatively simple manufacturing process, the use of these devices has spread around the globe. This has meant that no region has been left unaffected by IEDs, leading to calls for effective national, regional and global responses to the IED threat.

The analysis of IED threat in this report is therefore based on events that occurred and were recorded by the EWMP. The EWMP collects data on global explosive violence from English language sources. Sources are collected through an amalgamation of alerts set up for certain words pertaining to explosive violence being used in news stories. Examples of such words include ‘explosion’, ‘rocket’, and ‘IED’.  Only attacks that have produced casualties (killed and/or injured) are taken into account.  Incidents are classified according to the launch method used. For the purposes of this report, the part of the EWMP classified as ‘Launch method: IED’ is therefore the one that has been analysed. This launch method may have different activation methods, which means that suicide bombings and car bombs (among others) are included in the report as long as the device used was an IED.  The EWMP also records the location, time, target and perpetrator (if known) of IED attacks.