So far this year (January-May), Afghanistan has already seen 1,229 civilians deaths and injuries from explosive violence, including those from today’s IED attack in Kabul, which killed 80 and injured 350. This is a 53% increase compared to the harm seen in the same period last year.

88% of all civilian casualties from explosive violence in Afghanistan so far this year have been caused by IEDs.

IEDs have, by far, caused the most harm in this period, with 81% of civilian deaths and injuries caused by such weapons.

Whilst civilian harm from explosive violence is not currently at the level it has reached in some previous years, notably 2011, the harm caused is still significant.

Whilst security personnel such as police and military have also seen losses due to IED use, Afghan civilians continue to bear the brunt of this harm. When IEDs have been used in populated areas so far this year, an average of 98% of the casualties have been civilians.

Whilst Afghanistan does express a desire to counter the threat of IEDs, the impact of such devices has been increasing since 2013, despite a continued steady decrease in the number of IED incidents, as can be seen in the table below. 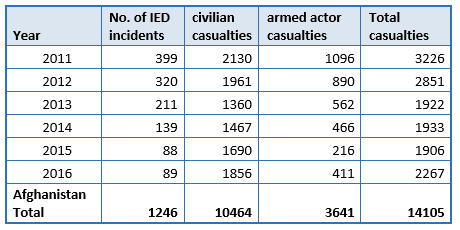 More needs to be done to counter IEDs at state and global level, which requires greater cooperation and coordination between all states and relevant organisations. AOAV calls for states and international organisations to work collaboratively to generate greater awareness of the number of civilians killed and injured each year by IEDs, and encourage a greater stigma from political, religious and social leaders on the use of IEDs. States must urgently address the threat of IED attacks. There is an urgent need for preventative measures to be implemented by States and the international community to reduce the impact of such devices in countries such as Afghanistan and others highly impacted by IEDs.