A recent report in the New York Times analysed the civilian impact of the rise in coalition airstrikes in Iraq and Syria.

Data compiled by Airwars, a nonprofit group that tracks reports of civilian deaths in Iraq and Syria, showed a significant jump in the number of reported deaths in the first three months of 2017.

The United States military recently confirmed that American-led airstrikes had been responsible for at least 352 civilian deaths since the start of the war against the Islamic State. However, Airwars estimated that the total was eight times higher.

In total, Airwars found that at least 3,100 civilians were killed in American-led airstrikes from August 2014 to March 2017. 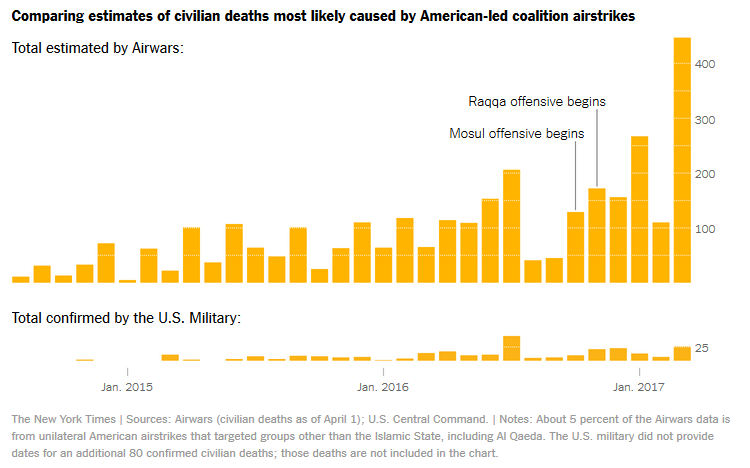 Whilst this timing coincides with the military operations to retake Mosul, in Iraq, and Raqqa, in Syria, human rights organisations question whether the significant increases in civilian harm are also due to changes in procedure. For instance, it is now easier call in airstrikes, and President Trump has shifted more authority over military operations to the Pentagon.

Lama Fakih, the deputy Middle East director at Human Rights Watch, is quoted in the New York Times article, saying that “making it easier to call in airstrikes will almost necessarily afford civilians fewer protections from being injured or killed.”

Operations to retake Mosul began October 2016, though a large majority of civilian deaths there happened after Iraqi forces entered the dense urban terrain of the city’s western neighbourhoods in mid-February. More than 1,000 deaths were reported there in March.

American-backed militia fighters in Syria have been advancing toward Raqqa with heavy support from American and coalition airstrikes since November.

The battles here are happening in areas that are less populated than Mosul. Still, Raqqa Province has had a quarter of all recorded instances of civilian deaths from American or coalition airstrikes.

On March 17, an American airstrike destroyed a building in the Jidideh neighborhood of Mosul, killing more than a hundred civilians who were inside. It may have been one of the deadliest American airstrikes ever in Iraq.

The American investigation into the strikes concluded that, while an airstrike did hit the building, it was not enough to cause the building to collapse. They proposed that the strike had set off explosives that ISIS fighters had placed in the building, contributing to the high death count.

In the weeks after the airstrike, military officials said they had made changes to their procedures, though they declined to specify how.

In Syria, at least three coalition airstrikes had high death tolls in March. An airstrike that hit a school in the town of Mansoura in Raqqa Province on March 21 reportedly killed more than 30 civilians who had sheltered there.

Less than a week earlier, residents said a strike had hit a mosque in the village of Jina in Aleppo Province, killing at least 37 civilians.

Criticism of these strikes has been levelled by many international organisations, including the UN and Amnesty. However, as pressure builds to defeat ISIS quickly, it is likely that more civilians might feel the deadly impact of these airstrikes.

AOAV has been recording the casualties (i.e. people killed and injured) from explosive violence around the world as reported in English-language news sources since 2011. The data recorded cannot capture the full scale of civilian suffering in Iraq, but is indicative of the patterns of harm that exist when explosive weapons are used in populated areas.

Last year, civilian deaths and injuries from air-launched explosive violence in Iraq rose by 91%, compared to the previous year.