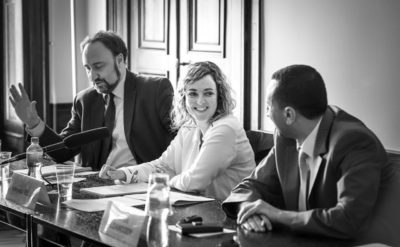 What does Islamic law say about International Humanitarian law (IHL) notably in relation to the protection of civilians, the prohibition against indiscriminate attacks, the protection of property or the treatment of prisoners of war? What are the challenges facing the application of certain classical Islamic rules on the use of force in modern armed conflicts? How to should the international actors engage with Islamic armed non-state actors (ANSAs) on IHL?

Ahmed Aldawoody evoked a picture of Islamic Law that, although grounded in a History going back to the 7th Century, was neither static nor monolithic – much like IHL. Aldawoody commented that, although challenges remained on multiple interpretations of Islamic Law, it was indispensable for the protection of civilians and mirrored the chief tenets of IHL, including on the use of indiscriminate weapons. 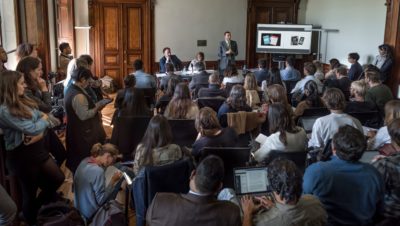 Annyssa Bellal extended the debate to include the question of engaging with armed groups, including irregular groups or non-state actors. Asked by Dr Kearney if there were any groups who, because of their actions, should be excluded from diplomatic engagement, Dr Bellal iterated that all options had to be considered if they had the potential of generating a peaceful outcome – it was not uncommon for non-state actors to argue that they have a different understanding and interpretation of international norms or they lack the capacity to implement them.

The Geneva Academy’s IHL talks take place every 2 months at the organisation’s buildings beside Lake Geneva.