On Wednesday, October 25th 2017, Action on Armed Violence’s Executive Director, Iain Overton, presented the findings from AOAV’s latest report, the Improvised Explosive Device (IED) Monitor, at Countering the Threat Posed by Improvised Explosive Devices 2017: a side event on the data and the developments in global IED usage and response. The event was organised in partnership with the United Nations Institute for Disarmament Research (UNIDIR) and the Permanent Mission of Afghanistan to the United Nations, and took place as the UN General Assembly First Committee on Disarmament and International Security meets to discuss current international security challenges. 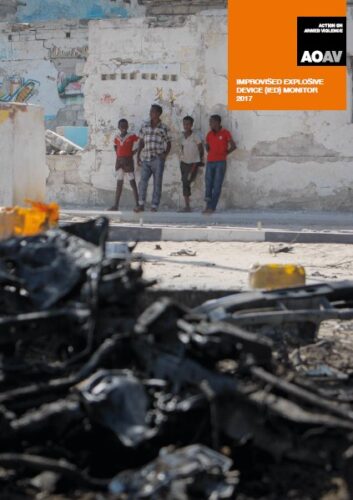 Since October 2010, Action on Armed Violence (AOAV) has been recording the appalling suffering caused across the globe by both manufactured and improvised explosive weapons, as reported in English language media. In this latest report, AOAV focuses on the harm wrought by IEDs.

Since AOAV’s recording began, the organisation has found that the civilian harm caused by IEDs outweighs that caused by all other explosive weapon types combined. Between 2011 and 2016, AOAV recorded over 109,000 deaths and injuries from IEDs and of these, 81% were civilians.

Though 2013 was the worst year for IED harm, in recent years many countries have seen a significant increase in the number of civilians killed or injured by IEDs. 2016 was the worst year on record for civilian casualties from suicide bombings, with 9,680 civilian deaths and injuries recorded.

This data focuses on the immediate impact of IEDs, but the damage wrought by such weapons resonates far beyond the initial blast: displacement of populations, destruction of homes, ongoing psychological suffering and economic deprivation are just some of the reverberating effects of IEDs – consequences that are often poorly understood or addressed.

The report also includes three further articles on IED use, harm and developments: The Islamic State’s Suicide Industry; The evolution of Suicide Car Bombs examined; and Drones and the IED threat.

AOAV’s Executive Director said of the report: “There is no day that goes past without the impact of an improvised explosive device (IED) making headlines around the world. Of all explosive weapons used, the IED is the most widespread, the most harmful and the most pernicious. Based on the belief that to overcome a problem, we must first understand it, this monitor is a small step in seeking to address the terrible realities of today.”

It is a monitor that is, also, a response to a call to action.

In July 2016, the United Nations Secretary-General released a report called “Countering the threat posed by improvised explosive devices”. Within its pages lay a recommendation: ‘Further research on various dimensions of IED issues, including prevention, preparedness, response and recovery’ was called for, so as to ‘help inform a better understanding of the multifaceted approach required to address the issue of IEDs’ (Recommendation 22). In addition, in late 2016, the Afghanistan government proposed, for the second year, a resolution: “Countering the Threat Posed by Improvised Explosive Devices.” It was adopted by the General Assembly on December 5th 2016. Its text encouraged greater research and awareness-raising on improvised explosive devices (IEDs).

Accordingly, based on data from AOAV’s own Explosive Violence Monitor, and further in-depth research by experts in this field, AOAV presents this monitor on IED harm, developments, tactics, and users.