Although Egypt ranked as the country with the eighth most IED incidents in AOAV’s data, explosive violence in the country has not been given enough attention. According to AOAV’s data, IED incidents have multiplied quickly in 2014 and 2015, and there is reason to believe that the number of attacks will continue to rise. 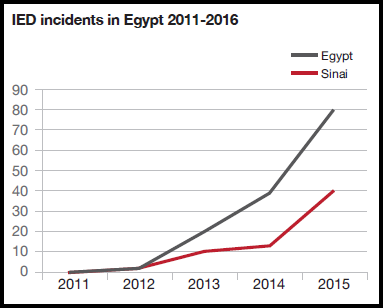 Although most attention is given to chaos in the Sinai Peninsula, there is a surprising amount of attacks occurring outside Sinai. These have mainly been carried by groups such as Ajnad al-Misr, al-Furqan Brigades, the Allied Popular Resistance Movement, and the Islamic State in Egypt (a group separate to IS Sinai Province), and have focused mainly in areas around Cairo and Fayoum. There have also been occasional ambushes and kidnappings in the Western Desert, signifying how groups based in Sinai can use it as a base in order to launch attacks into other regions.

It is Sinai, however, that is the epicentre of terror in the country, and represents the biggest challenge for Egyptian security forces. The situation is deteriorating, between April-July 2016, there was a total of 195 different kinds of terrorist attacks in the Sinai according to Egyptian terrorism observers. Local sources, unverified by AOAV, stated that there was as much as one IED attack per day within this period. Unlike mainland attacks (which have decreased) IED attacks in the Sinai have risen in 2016. Moreover, IS Sinai Province killed a Coptic Priest on 30 June 2016, a move which risks introducing a nasty sectarian dimension to the situation.

The Egyptian government and security forces have faced criticism for their management of the security situation. On 7 August 2016, Egyptian state media reported the Egyptian military announced the killing of Abu Doa al-Ansary, an IS Sinai Province leader, along with 45 other jihadis. However, doubts have been raised among local residents as to whether Ansary was actually killed or if he even existed, given that many had never heard his name before. IS Sinai Province has contrary to common practice not eulogised him, which has led some to believe that the Egyptian security forces are simply reporting fabricated news in order to signal progress.

Coupled with the Egyptian state’s failure to properly manage the security threat is the brutal crackdown that President Abdelfattah al-Sisi has instigated since seizing power in a coup d’état in 2013. Regional media has reported on crackdowns on both trade unions and journalists. Amnesty International in July 2016 accused Egypt’s National Security Agency of “abducting, torturing and forcibly disappearing people [to] wipe out peaceful dissent”.

Egypt is also performing poorly on the economic front, meaning that there are plenty of antagonised young people in the country with bleak futures. The US State Department estimates that there are ‘at least’ 700 Islamic State fighters in Egypt, and these have according to AOAV’s data claimed 22 IED attacks in the last five years. There are also fears that the chaos in Libya will spill over into the Egypt. If things do not change in Egypt, IED attacks will most likely rise in the country.

Although Tunisia has only experienced 3 IED incidents in the last five years, there has been a presence of terrorist groups that have carried out small-scale ambushes on security forces in the country for a while. These groups include the Uqba bin Nafi brigade of AQIM, Jund al-Khilafa, Ansar al-Sharia and, more recently, IS. The latter’s attacks in 2015, such as the Sousse beach shooting of July 2015 (killing 39) and the IED attack on a bus in Tunis on 24 November 2015, indicate a worrying trend, and Tunisia may witness a rise in IED attacks in the coming years.

Tunisia has exported an unexpected number of foreign fighters, despite being the only success story of the Arab Spring. According to local NGO Rescue of Tunisians Trapped Abroad (RATTA), more than 7,000 Tunisians have left the country to join groups like IS. Many of these fighters have travelled to Libya, which occasionally has been used as a base for attacks carried out in their home countries. Local Tunisian media has suggested that this is due to the sudden political freedom enjoyed by radical groups after the ousting of dictator Zine Abedine Ben Ali, along with a stronger influence of radical television preachers from the Gulf. Moreover, Tunisia has history of an aggressive modernisation and secularisation campaign which has led to religious expression being suppressed until recently. This to some extent further corroborates the relationship between Francophonism, ‘aggressive’ secularism and foreign fighters mentioned previously.

Tunisian media has described the threat of terror as ‘imminent’ but that the situation remains under control. Security forces have been carrying out operations throughout 2016. However, the continuation of violence in Libya is likely to cause problems for Tunisia. The country has so far been unable to monitor and secure its borders,[i] which is why observers are calling for a comprehensive national strategy in order to quell jihadism in the country. If terrorist groups manage to get a foothold in Tunisia, the country may see a sharp rise in IED violence before too long.

Lebanon has seen a total of 30 IED incidents since 2011. Almost half of these (12) occurred in the Beqaa valley, which lies alongside the Syrian border. These have mainly been part of skirmishes between Jabhat al-Nusra, IS, Hezbollah and the Lebanese Army, that the region has seen as a result of the spillover of the Syrian War. Beirut has had seven attacks, most notably the assassination of politician Mohammad Chatah in a car bomb on 27 December 2013, and the double suicide bombing in Shia district Bourj al-Barajneh on 12 November 2015 that killed 43 and injured more than 200. Tripoli in the North Governorate saw a double VBIED attack on the Al-Salam Mosque and Al-Taqwa Mosque on 23 August 2013 that killed 47 and injured 500.

Lebanon has thus already experienced its share of explosive violence, but several factors suggest that the country may face further explosive violence. The biggest reason for this is the spillover of the Syrian war. Besides the more than 1 million Syrian refugees in the country, Lebanon has seen a direct impact from the war. In June 2014, IS and Jabhat al-Nusra even invaded and briefly held the town of Arsal in the northern Beqaa valley. The Lebanese army, in unprecedented cooperation with Hezbollah, has been able to fight off the jihadi groups. Moreover, Lebanese analysts have reported that many suspect the suicide bombings in al-Qaa on 27 June 2016, where eight suicide bombings were carried out in one day, were perpetrated by Syrian refugees from nearby Masharih al-Qaa camp. Lebanese security forces have stated that groups like IS and Jabhat al-Nusra have attempted to recruit in Lebanese refugee camps.

Lebanon’s domestic political climate further complicates things. The country has not been efficiently governed for several years, and has been without a president for the last two years. Inevitably, this has negatively impacted its ability to deal with the country’s security situation. Moreover, the fact that Hezbollah is arguably the most powerful political, and military, movement in the country makes Lebanon a logical target for terror due to Hezbollah’s involvement in the Syrian civil war. Their involvement has also escalated sectarianism in the country. Given that Lebanon saw a 15 year long sectarian civil war between 1975 and 1990, existing tensions may be exacerbated by the Syrian crisis next door.

Between November 2015 and June 2016, Jordan experienced three terrorist attacks that were the worst the country had seen since the Amman hotel bombings of 2005, which claimed 60 victims. In November 2015, a man shot two American contractors and three Jordanians at a police training facility in Amman. On 6 June 2016, a lone gunman killed five employees of the country’s General Intelligence Department (GID) outside a refugee camp in Baqaa. Finally, the country experienced its first IED attack since the Amman bombings of 2005 when a suicide VBIED crossed the Jordanian border from Syria on 21 June 2016 at the Ruqban crossing and detonated near a Jordanian security outpost, killing seven soldiers.

Despite Jordan being comparatively stable since the beginning of the civil war in neighbouring Syria and throughout the conflict in Iraq, there are worries about homegrown terrorism and the seemingly inevitable spillover effect from the war in Syria. In March 2016, an 11-hour long gun battle between security forces and IS cells resulted in the death of seven militants, and did according to the GID foil a major terrorist attack that was going to target both civilian and military targets. Irbid is the hometown of one of the most infamous Jordanian IS supporters, the aforementioned Abu Muhammad al-Tahawi. Moreover, the southern crime-ridden city of Ma’an has according to local media seen a rise in IS sympathies since at least 2014. IS to some extent has Jordanian roots, as Abu Musab al-Zarqawi who founded predecessor organisation AQI is from Jordan’s second largest city, Zarqa.

Estimates suggest that Jordan has sent more than 2,000 foreign fighters to Syria. Surprisingly, three foreign fighters have parents who are sitting members of the Jordanian parliament. The Jordanian economy has taken a heavy toll from the more than 600,000 Syrian refugees entering the country, and if privileged youth can find IS appealing, this would suggest a worrying indication for those less fortunate.

The refugee issue is another possible factor that may spur IED attacks in Jordan. Jordan recently closed its borders to Syria, meaning that about 60,000 refugees are stranded on the Syrian side of the border. However, Arabic media has reported that Jordan has considered stepping into Syria to create a buffer zone next to its borders, and would potentially stabilise this zone with the help of Jabhat al-Nusra. Although this remains speculation, such a move could provoke a reaction from rivaling terrorist groups.

For the moment, Jordan remains stable. However, given its vicinity to crises in Syria and Iraq, and with evident sympathies for IS festering in the country, it would not be unlikely for Jordan to suffer more IED attacks in the future.