Turkey’s security situation has taken a drastic turn for the worse within the past five years, and this is reflected in the number of IED attacks in the country.  Although IED incidents decreased in 2013 and 2014, they have rapidly escalated in 2016. In fact, the first half of 2016 alone saw more attacks than any other full year within the last five years. 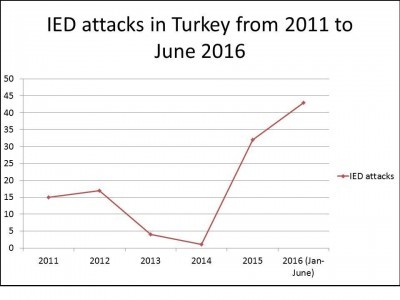 There are several explanations for why Turkey has experienced this increase, and for why more violence is likely. The first is its perennially bad and once again deteriorating relationship with its own (and other countries’) Kurdish population. Turkey has experienced several large-scale attacks from the PKK and TAK, for example the suicide car bombing in Ankara on March 13, 2016, which killed 37 civilians and injured 125. Attacks from the PKK have increased after a ceasefire and two-and-a-half-year long peace process between the group and the Turkish government collapsed in November 2015. Violent attacks from the PKK have in turn led to a heavy-handed response from the government in the predominantly Kurdish southeast, which has left cities in ruins and hundreds killed. Given that some cities in the southeast have been described as war zones, with the Turkish military facing off against its own population, this will most likely lead to more IED attacks from Kurdish separatist groups.

The Kurdish insurgency is inevitably linked to the ongoing Syrian war, which is another reason why Turkey has seen and will probably see more explosive violence. Turkey, which sent troops into Syria in August 2016 in operation ‘Euphrates Shield’, has become wary of the influence the Syrian Kurdish forces (YPG) has gained in northern Syria, a group which they see as allied with arch enemy PKK. As the US has lent their support to YPG forces in Syria, there have even been reports of Turkey allying with the Syrian government in order to quash YPG influence. Given that the Kurds in northern Syria declared an autonomous federal region in Syria in March 2016, they see Turkey’s military intervention as an attempt to undermine this effort. In effect, this may mean that Turkey will face a ‘two-country Kurdish insurgency’, which is likely to increase further attacks from groups such as the PKK and TAK.

It is worth dwelling on Turkey’s involvement in the Syrian war. Although they only in 2016 intervened, Turkey has very much been an active player in the Syrian conflict. As previously mentioned, Turkey has facilitated weapons transfers to groups such as Jaysh al-Fateh, the umbrella organisation that includes Jabhat al-Nusra and Ahrar al-Sham. This report has also highlighted the ease with which foreign fighters have used Turkey as a transit point before joining various groups in Syria. However, Turkey has also been accused by various sources of proactively supporting IS by means including Turkish training of IS fighters, medical assistance to IS fighters, financial support through oil purchases, and even military assistance to IS in battles against the YPG.

Although there is no doubt that Turkey has taken an active role in funding groups in Syria, it is difficult to confirm to what extent the accusations around Turkish support for IS are true. What is certain is that Turkey, which to some extent sees IS as its enemy’s enemy in Syria, and therefore logically a friend, has through its leniency over border crossings and its support for various armed groups contributed to the creation of its own internal threat. This has become clear with several IED attacks being carried out by IS on Turkish soil. For example, IS claimed the multiple suicide bombings that killed 128 civilians in Ankara on October 10, 2015.

However, if NATO ally Turkey is in fact fighting against IS in Syria, in line with its official Westward-looking policy, it is likely that further attacks will take place on Turkish soil.