Britain is a country of 65 million people, the 21st most populous nation in the world, with the 9th largest economy in the world based on GDP (PPP). Yet it is the second largest exporter of arms in the world.

How did this happen? How does Britain, a small island with very little in the way of an industrial base, lead all European countries in the number of surveillance and cyber warfare companies registered within its shores? Why is it home to the largest number of private military and security companies in the world? How did Britain become the go-to country for despots around the world who want to ‘tool up’?

The answers to these questions goes back to a relatively little-known element of the Thatcher Revolution in 1980s Britain. The story of Thatcher’s confrontation with the unions and the industries they represented is well known. Thatcher emerged victorious and replaced a manufacturing base with the “Big Bang” in the City of London, which drew capital looking for a ‘liberal’ regulatory environment from around the world. London and the country as a whole is still feeling the consequences of that revolution to this very day.

But Thatcher wasn’t an industrial arsonist. There was one industry that she promoted to unprecedented levels: the arms industry. During her tenure, the British economy was given a massive boost from the sale of military hardware, and the Iron Lady spent a large portion of her overseas trips trying to sell British arms to foreign governments.

In 1985, for instance, Thatcher negotiated what is still the largest arms deal in history. The Al-Yamamah deal would see Britain sell fighter jets, missiles and ships to Saudi Arabia worth £42bn. The deal was, though, riven with accusations of corruption and bribery. The extent of such may be never fully known: two National Audit Office reports on the Al-Yamamah have been suppressed because of apparent “national interest” concerns. Mark Thatcher, Margaret Thatcher’s son, also stands accused of making millions of pounds in “commissions” from the sales.

Thatcher rapidly expanded the markets for British arms exports, but this program had always been a bipartisan affair. In fact, it was Harold Wilson’s Labour government which set up the Defence Export Services Organisation (DESO), an organisation meant to mobilise civil servants and arms industry executives in a coordinated campaign to sell British wares around the world. 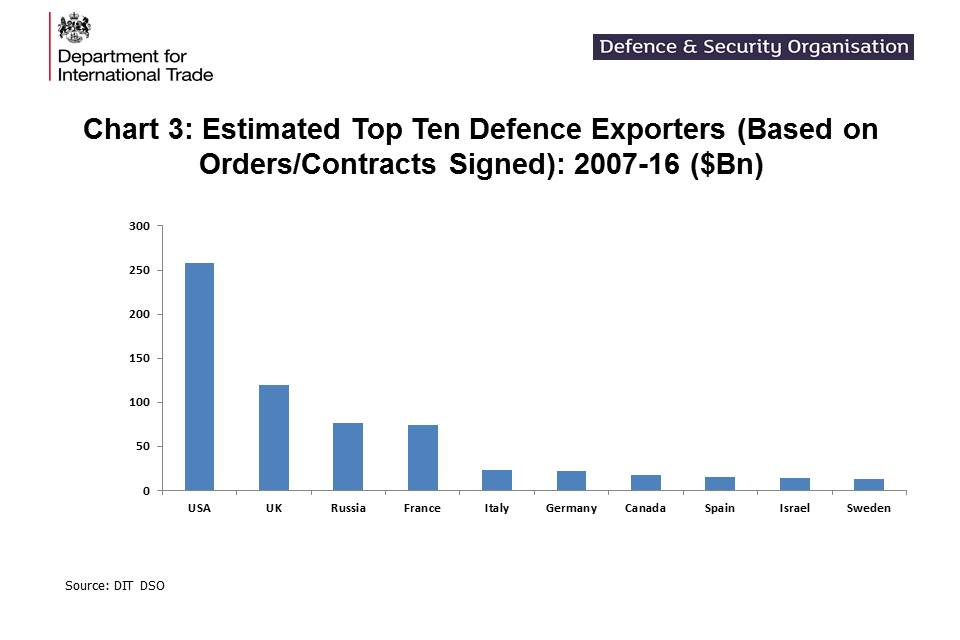 What it means, today, is that the UK stands as the second largest exporter of arms in the world, according to the UK government itself. According to the Department for International Trade and its Defence and Security Organisation (the modern version of Wilson’s DESO) in the decade from 2007 to 2016 “the UK successfully retained its position as the second largest defence exporter globally. The UK is also Europe’s leading defence exporter ahead of Russia and France.”

Since the Thatcher era, however, warfare has changed markedly. Technology has changed how wars are fought, while the adversaries have splintered and uncoupled from the state. But Britain has maintained its pre-eminence in the industry, nimbly moving on to dominate the cyber sector and private military sector in turn, thanks both to the relationships and capacities offered by the conventional arms industry that already exists but also to a light-touch regulatory environment that was fostered during the Thatcher era. No subsequent government since she stepped down as Prime Minister in 1990 has wanted to restrict the industries of violence from having maximum power on the world stage.

The UK’s existing arms industry and the government’s ability to promote it has made the UK a global hub for companies working on the cutting edge of the new cyber warfare. According to Privacy International, the UK has 104 surveillance companies producing technology for export — to foreign governments and corporations — headquartered in the country. That number is more than double the number of companies of the next European country, France, which has 45 companies headquartered in-country.

The UK has significantly more surveillance technology companies registered in its borders than anywhere in the world outside the US. This technology is being exported, with government approval, to some of the repressive regimes in the world.

The UK’s role in the US War on Terror from 2001 until today has given the war industries another fillip. Many of the PMSCs in the UK were set up by former soldiers in the British military who left service after fighting in Afghanistan and Iraq and wanted to make significantly more money in mercenary work. As Dave Allison, chief executive and founder of Octaga, a Hereford-based PMSC, says: “I left the forces after serving time with the parachute regiment and the special forces. I saw a distinct gap in providing security to corporate and private clientele, the various big companies out there that were doing it, it was all basically being driven on price, and we wanted to offer them something a little bit different, something bespoke. We cater for various clientele, from television and film industry, to corporate, government, and private high net worth (HNT) individuals, so it’s really broad spectrum of services we do, we do the physical side, the consultation side, and we do the technical side.” He says business has been roaring since they set up in 2001.

But like the conventional arms industry, these companies are shrouded in secrecy, something the government has no interest in ending. A large reason for the attractiveness of the UK as a destination is that these companies – and those producing conventional arms and surveillance technology – are left alone by government and the media. Sam Raphael, a senior lecturer in International Relations at Westminster University and author of a report on PMSCs in the UK, says that “this is a world where very little is known about what’s going on, no-one is publishing data on this. The government is not publishing lists of PMSCs which are operating, PMSCs themselves if you look on their websites… it (is) just corporate rubbish.”

This combination of learned skills in warfare, liberal regulation, the lucrativeness of mercenary work, and Britain’s global-facing heritage has meant that, today, the UK is the world’s leading centre for PMCS. According to the Sié Chéou-Kang Center at the University of Denver, the UK has by far the largest number of PMSCs headquarted in-country (199 companies).

So this is 21st Century Britain. A country that has decided to unshackle itself from the regulatory authority of the European Union is one that has also established itself as a leading exporter of instruments of warfare.  It is an industry that inherently cannot flourish under the scrutiny of human rights lawyers, and so it is that the industry remains opaque and often impenetrable. Surveillance system producers, mercenary groups, arms industries flourish in the dark.

It’s time to expose to the sunlight the British industries of war – and the people that enable them.