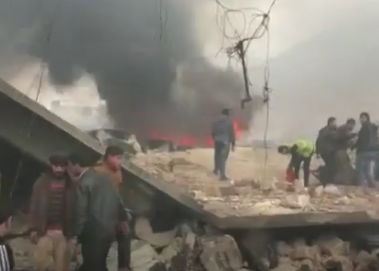 At least 43 were killed and 53 wounded on Saturday, January 7th 2017, when an explosives-laden truck was detonated in the Syrian rebel-held town of Azaz, near the Turkish border.

The explosion occurred in the commercial district of the town, outside a local courthouse and security headquarters.

The Syrian Observatory for Human Rights, reported that the explosion was caused by a rigged fuel tanker.

The town is occupied by opposition forces and anti-government activists, as well as those displaced by the surge of violence in Aleppo. Six rebels are thought to be among the 43 dead.

Whilst no group has yet claimed responsibility for the attack, ISIS are seen as the likely perpetrator.

Other organisations, such as the Azaz Media Center believed the death toll to be higher, with 60 dead.

Whilst state actors have been responsible for huge levels of civilian harm in Syria, non-state violence has also been a constant threat to the lives of Syrian civilians. Of the civilian deaths and injuries caused in Syria between 2011 – November 2016, 21% were caused by IEDs.

For more information on explosive violence in Syria see here.