A car bomb, more specifically referred to as a Vehicle Borne Improvised Explosive Device (VBIED), is any vehicle that has been altered so as to solely function as a large rolling IED. These are vehicles driven to and detonated near a given target. The VBIED can either be parked and then remotely detonated, or it can be driven by a suicide bomber who ultimately controls the detonation mechanism. The latter is defined as a Suicide Vehicle Borne Improvised Explosive Device (SVBIED), or more commonly: a suicide car bomb.

Using SVBIEDs can enable a numerically and technologically inferior force to accurately strike its enemy using large explosive payloads. As such, it has become one of the most popular methods of attack for a variety of terrorist and insurgent groups, mainly due to its powerful role as a force multiplier. While many groups employ (S)VBIEDs, the Islamic State (IS) are perhaps the most infamous for its widespread use of the tactic; they claim to have conducted 815 (S)VBIED attacks in Syria and Iraq in 2016 alone.

Over six years (2011-2016) Action on Armed Violence (AOAV) has recorded over 21,000 deaths and injuries from suicide car bombs. Of which, 73%  were civilians. There has been a considerable rise in casualties from such attacks over the last six years. Last year, civilian deaths from suicide car bombs rose by 97% compared to the previous year, or 148% compared to 2011 – the first year of AOAV’s recording. Of the civilian casualties recorded globally, 40% occurred in Iraq, whilst a further 21% occurred in Syria.

Generally speaking, all (S)VBIEDs can be divided into two broad categories: the covert and the up-armored. 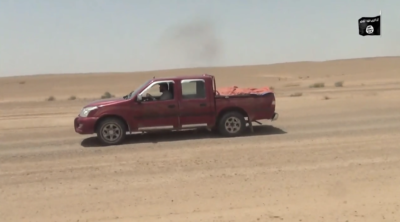 The covert (S)VBIED is an unmodified civilian vehicle fitted with a hidden explosive payload. This type is overwhelmingly used in insurgencies where the actor has a low level of territorial control. Its stealthy nature allows the (S)VBIED driver to blend in with civilian traffic and to get as close as possible to the intended target before detonating. This type allows for both VBIEDs and SVBIEDs to be used, as whoever is using them operates covertly.

On the other hand, an up-armored SVBIED are based on military and civilian vehicles, which are overhauled with metal plates welded to the front and sides of the vehicle. This type is mostly limited for use in conflicts where the actor using (S)VBIEDs has gained control of a sizeable piece of territory, thereby creating fixed front lines. In this situation, the use of covert (S)VBIEDs does not make sense anymore, as they most likely would be disabled before reaching the target. 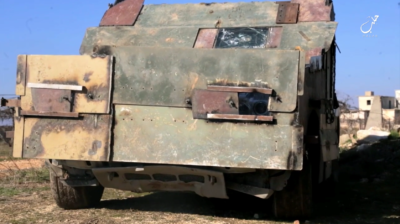 Up-armored 4×4 SVBIED, used by IS in the Aleppo area and featured in a video released on February 19th, 2016.

During the Iraq War’s bloody insurgency, the predecessors of IS favoured the method of covert (S)VBIEDs. While both subtypes were used extensively, they each served a different purpose. The parked VBIED functions as a larger static IED, while the covert SVBIED is more suited for offensive operations. At the same time, they also used up-armored SVBIEDs against well-defended targets, in areas where they had an increased presence and fighting was especially tough.[1]

As IS swept across Syria and Iraq in 2013-14, though, their resources and territorial holdings grew rapidly, provoking a shift in their (S)VBIED use. They switched to almost entirely using up-armored SVBIEDs in areas that they swept through, a change necessitated by the shift away from guerrilla tactics to more semi-conventional combat in these areas. While IS and their predecessors have always had an affinity for (S)VBIED use, it wasn’t until after 2013-14 that the up-armored SVBIED was really institutionalised as one of the mainstays of their offensive and defensive military capabilities.

This is true not only for the conflicts in Syria and Iraq, but can also be applied to other conflicts where a non-state actor using (S)VBIEDs gains territorial control. In Syria, for instance, Jabhat al-Nusra (now Hayyat Tahrir al-Sham) underwent the same process with regard to (S)VBIED use, shifting from using covert (S)VBIEDs en masse at the beginning of the war, to mainly employing up-armored SVBIEDs in and around their strongholds once the fighting had entered a semi-conventional stage of combat.

IS’s massive investment into the construction of (S)VBIEDs is, however, unique because it is so unparalleled. IS – at least up until recently – ran a network of (S)VBIED manufacturing workshops divided on a provincial level and tasked with supplying each province (Wilayah) across the territories it controlled. While each province was responsible for manufacturing its own (S)VBIEDs, there were some provinces that have been able to supplement (S)VBIED operations in surrounding provinces. Resources play a big part when it comes to (S)VBIED manufacturing, and the cities of Raqqah and Mosul are good examples of its importance.

There are very clear geographical differences when it comes to identifying certain IS (S)VBIED types. As resources are more plentiful in  cities, the hardware that came with capturing Raqqah and Mosul allowed IS to increase the (S)VBIED manufacturing quantity and quality there, compared to other provinces.

In order to facilitate and speed up SVBIED construction, IS have also standardised many of the components that are used in the construction process. They often use the same or similar vehicle models that are fitted with identical armour kits, and a lot of time the IEDs that make up the main payload are standardised as well. Recent evidence has surfaced indicating that IS are experimenting with Explosively Formed Penetrators (EFPs) and aimed-charges in the main payloads. This shows that they have a good understanding of how explosive forces work and that they are actively seeking to increase the effectiveness of the (S)VBIEDs they manufacture. 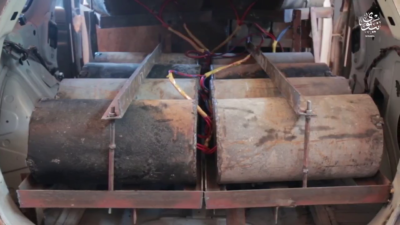 A series of daisy-chained IEDs function as the main payload for most (S)VBIEDs used by IS. Footage from an IS-run SVBIED workshop in the Mosul area, released on May 17th, 2017.

The immense pressure felt by the ongoing ground and aerial campaign against them has also forced them to experiment and innovate in many other aspects. One such innovation came about after the beginning of the Mosul offensive last year.

Once Iraqi forces reached the city proper, IS exclusively began using up-armored SVBIEDs that had the armour painted in the same colour as the rest of the vehicle (stage 1 camouflaged SVBIEDs). They utilised a wide range of colours, sometimes even bright hues that seem counter-intuitive from a camouflage viewpoint. This was a likely attempt to fool Iraqi forces and coalition aircrafts into thinking the vehicles were not SVBIEDs, thereby potentially giving the SVBIED drivers more time to reach their targets. This evolution was likely to be a result of fighting progressing from the wide-stretched Ninawa plains to the often-narrow streets of Mosul city; with seconds often making the difference between life and death in an urban environment. 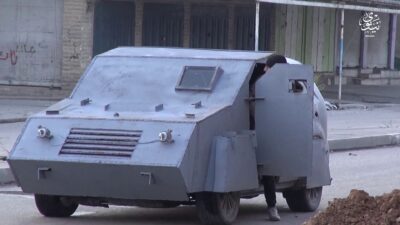 A stage 1 camouflaged SVBIED used against ISF in Mosul on March 13th, 2017.

Once fighting reached the western bank, IS began painting fake windshields, side windows, grilles, and tires on the already masked armour (stage 2). Emulating the defining exterior features of a regular car gave the camouflaged SVBIED an even more authentic civilian silhouette from a distance. 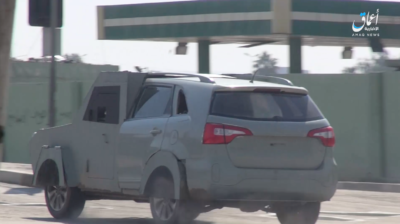 A Stage 2 camouflaged SVBIED used against ISF in Mosul on March 5th, 2017.

A further innovation within this SVBIED type came as the battle of Raqqah was drawing closer in early April. There, IS began using camouflaged SVBIEDs with interior armour (stage 3). While these constructions are visually identical to covert (S)VBIEDs, they can also withstand a hit if fired upon. It’s a mixture of stealth and protection: the best features of both covert and up-armored (S)VBIEDs. 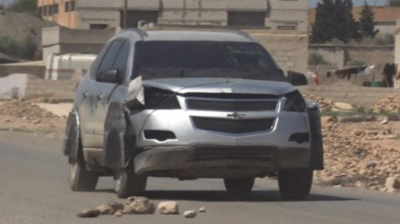 A stage 3 camouflaged SVBIED used against YPG near Tabqah on April 6th, 2017.

Another innovation that IS has pioneered is the two-man SVBIED. These are up-armored or camouflaged SVBIEDs that have both a driver and a light or heavy machine gunner tasked with suppressing the target. The idea is to increase the chances of the SVBIED being able to reach the intended point of detonation, and it is typically used on targets considered to be especially difficult.

Excerpt from an official IS infographic, detailing a two-man SVBIED.

A further innovation within suppression-based SVBIEDs came in late April, when the IS contingent in Mosul city introduced camouflaged SVBIEDs with rocket pods welded to the roofs of the vehicles. These gave the driver the ability to launch five 73mm recoilless rifle rounds toward their enemy before detonating the main payload, essentially providing the same suppression effect as two-man SVBIEDs, while only needing a single operator. 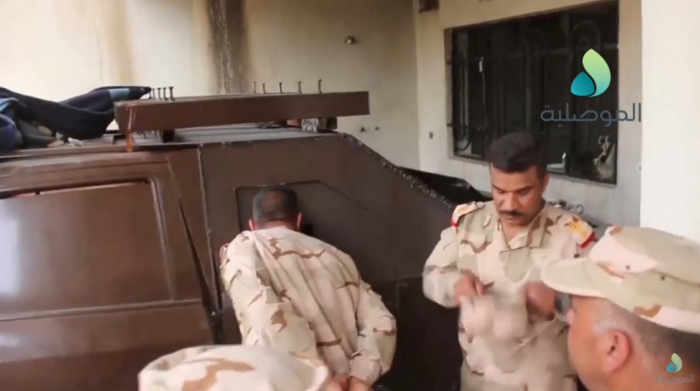 A stage 1 camouflaged SVBIED with 5 rocket pods on the roof, captured intact by ISF in Mosul. May 20th, 2017.

IS has also made great use of heavy construction equipment in conjunction with, or as, SVBIEDs, especially front-end loaders. These vehicles are able to remove concrete blast barriers, berms, roadblocks, as well as other obstacles blocking the road – clearing the path for SVBIEDs to strike areas that were previously too well-defended.

(S)VBIEDs are very adaptable weapons, and can be modified to function in a variety of different settings. There is essentially a different (S)VBIED design for every potential target type and battlefield condition. This makes them all the more difficult to counter, as the groups using (S)VBIEDs more often than not will adapt to the counter-(S)VBIED tactics.

IS are an exceptional case though. They are the only group to have constructed (S)VBIEDs on an industrial scale, and they have used more (S)VBIEDs than any other group in the history of (S)VBIED usage. All the different design variations and (S)VBIED types they pioneered are not necessarily tactics that other groups using (S)VBIEDs are going to employ, but the scale and width of their (S)VBIED program is an important illustration of what is possible when a group dedicates enough resources to the development and refinement of (S)VBIEDs.

[1] “The Endgame: The Inside Story Of The Struggle For Iraq, From George W. Bush to Barack Obama” (Michael R. Gordon & General Bernard E. Trainor)