At least one death or injury from explosive violence was recorded in 26 countries and territories last month. The five worst impacted countries were Syria, Afghanistan, Yemen, Pakistan, and Iraq according to civilian casualties.

Iraq dropped to fifth, amongst the worst impacted locations last month. Most reported casualties in Iraq during August were armed actors and security personnel, whilst the country continued to see surprisingly low levels of civilian harm. AOAV recorded 131 civilian casualties in Iraq in August.

However, given the security situation in Iraq, it is likely that many civilian casualties go unrecorded.

88% of all civilian casualties in Iraq last month were caused by improvised explosive devices (IEDs).

Civilian casualties from explosive violence in Afghanistan more than doubled last month, compared to July. This is largely due to a few highly lethal IED attacks and airstrikes on populated areas. At least three US airstrikes were reported to have killed civilians in Afghanistan last month, as well as another by Afghanistan. Though, it should be noted that, four suicide attacks alone – two by ISIS and two by the Taliban – were responsible for 65% of civilian casualties.

Yemen’s position as third-most-impacted is almost entirely due to the continued violence perpetrated by the Saudi-led coalition. One airstrike by the coalition on August 23rd left at least 35 killed when the strike hit a hotel in Arhab.

Overall, globally, when explosive violence was used in populated areas, 90% of all casualties were civilians, compared to 12% in other areas.

For more on the increasing harm from airstrikes, please see here. 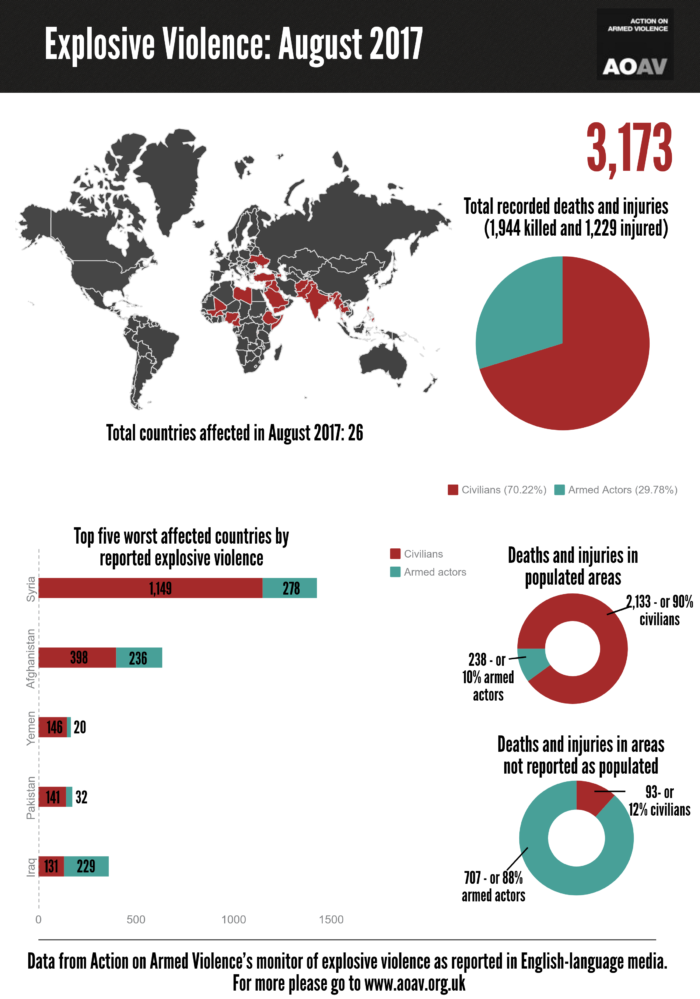