Whilst , the civilian deaths fell compared to the previous month, the armed actor deaths rose. Both returning close to the monthly average for each during 2016.

The top five most impacted countries this month were: Syria, Iraq, Turkey, Nigeria, and Somalia.

Whilst Syria and Iraq remained in their usual positions, Afghanistan, Pakistan and Yemen (recorded as 3rd, 4th and 5th respectively in November) disappeared from the table.

Whilst Pakistan and Afghanistan saw decreased levels of harm from explosive violence, for Yemen it was merely a change in target. Yemen saw substantial harm to army personnel from non-state actors, instead of high-levels of civilian harm by state actors.

Yemen experienced two ISIS suicide attacks in Aden. The first on December 12th, killed and injured over 90 soldiers at an army base in Aden. A similar attack on December 18th saw the suicide bomber kill and injure over 130 soldiers queuing to collect their salaries. Though Saudi airstrikes continued to cause civilian harm.

Turkey’s rise in civilian deaths and injuries is primarily due to one high-profile incident that saw a car bomb, using 300kg of explosives, and suicide bomber detonate outside of soccer stadium in Istanbul. The event caused the death of many armed actors and civilians. Some of those listed as civilian injuries may however be those of police, as news sources did not specify how many of the injured were police or civilian.

In Nigeria, all attacks were IEDs of which three of the four incidents were suicide bombings, where two used multiple bombers. All five suicide bombers were female and at least three were children. The most lethal attack caused over 100 deaths and injuries, when two female suicide bombers targeted a market in Madagali, in Adamawa State.

Whilst AMISOM caused civilian deaths and injuries in Somalia in December, most were caused by a suicide truck bomb perpetrated by al-Shabaab at the entrance to the port in Mogadishu. Whilst al-Shabaab said the attack targeted security officials, other sources recorded that the majority of the victims were civilians including port workers.

Similar levels of harm were recorded in December 2015 – though Chad was in the five most impacted, where now, fortunately, the Boko Haram insurgency has been significantly reduced. 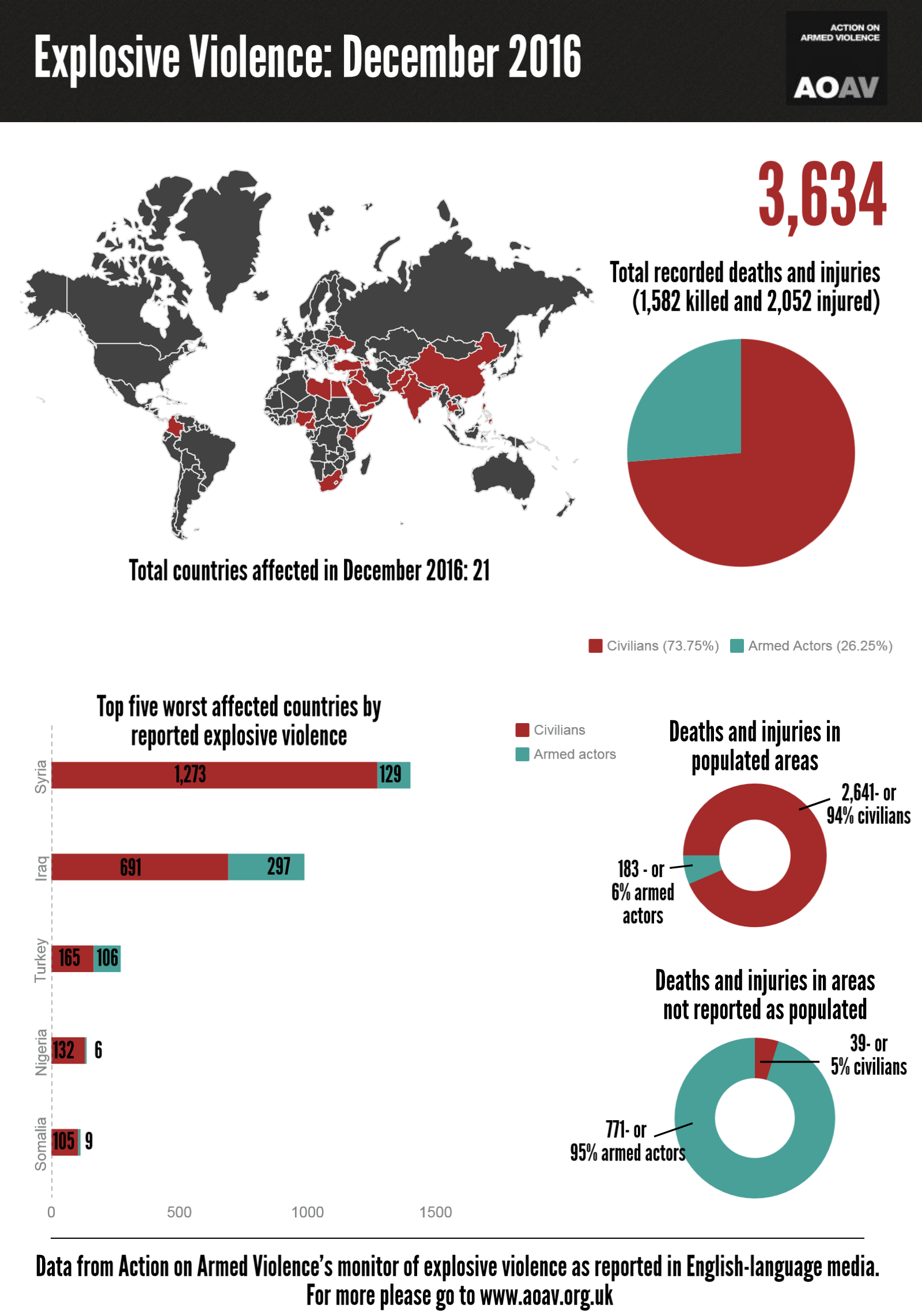