At least one death or injury from explosive violence was recorded in 25 countries last month. The five worst impacted countries were Syria, Iraq, Pakistan, Afghanistan, and Nigeria, according to civilian casualties.

Despite Iraq retaining its usual place amongst the worst impacted countries, the country continued to see surprisingly low levels of civilian harm.

77% of all civilian casualties in Iraq last month were caused by improvised explosive devices (IEDs). Of those killed by IEDs, 66% were caused by just 6 suicide attacks.

Most civilian casualties occurred in Raqqa and Deir Ezzor.

Pakistan’s position as the third-most impacted country was caused predominantly by IEDs. Just one incident, when a suicide bomber on a motorbike detonated their explosives next to a market in Lahore, was responsible for 43% of all civilian casualties. The attack was claimed by the Pakistani Taliban.

In Afghanistan, 67% of the civilian casualties were caused by IEDs – with just over 50% of all civilians casualties caused by one suicide attack in Kabul.

All civilian casualties from explosive violence in Nigeria last month were caused by suicide attacks in Borno state. While some attacks used multiple suicide bombers, the majority of the attackers were women or children – a tactic increasingly being used by Boko Haram.

When explosive violence was used in populated areas, 85% of all casualties were civilians, compared to 18% in other areas.

For more on the increasing harm from airstrikes, please see here. 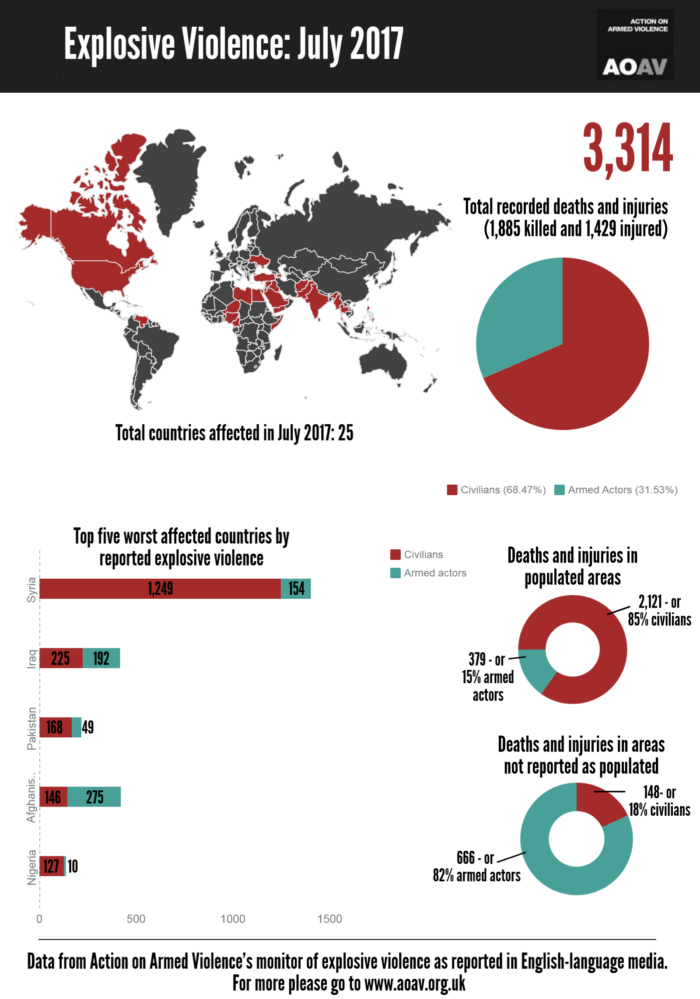