March 11th saw twin bomb attacks targeting Iraqi Shia pilgrims near the Bab al-Saghir cemetery. The blasts were initially reported to have killed 40 and wounded 120 – the death toll later rose to 74. The attacks on March 15th saw a suicide attack at the Justice Palace kill 39, including seven armed actors actors, and wound over 100. A second suicide bomber wounded 28 in the Rabweh area of Damascus.

Despite these large-scale IED attacks, air-launched attacks across Syria still accounted for the majority of deaths and injuries caused by explosive violence, accounting for 51% (499) of all civilian casualties.

Similarly, whilst IEDs still caused the most civilian deaths and injuries in Iraq (51%), air-launched attacks caused significantly more deaths and injuries than usual in Iraq in March. At least 252 civilians casualties were caused by air-launched weapons. This is a 288% increase from the previous month or 227% greater than the monthly average recorded last year.

Most of the casualties from air-launched explosives in Iraq were the result of the airstrikes in Mosul. Though there is still a lack of clarity behind the incidents, up to 240 civilians are thought to have been killed in the airstrikes on March 17th.

In Afghanistan, IEDs continued to account for the most civilian harm. Just 3 IED incidents in Kabul account for 87% (226) civilian casualties from explosive violence across the country. Two of these attacks were suicide attacks in populated areas, causing over 200 civilian death and injuries between them.

Whilst the levels of reported civilian harm from explosive weapons has decreased in Yemen over the last year, Yemen remains amongst the most impacted countries. Significantly, over 99% of all civilian casualties from explosive violence in Yemen last month were caused by air strikes.

In Pakistan, 79% of all civilian deaths and injuries recorded in March, occurred during one attack by Jamaat-ul-Ahrar, when a powerful car bomb detonated near a Shiite place of worship killed 22 and injured 90. 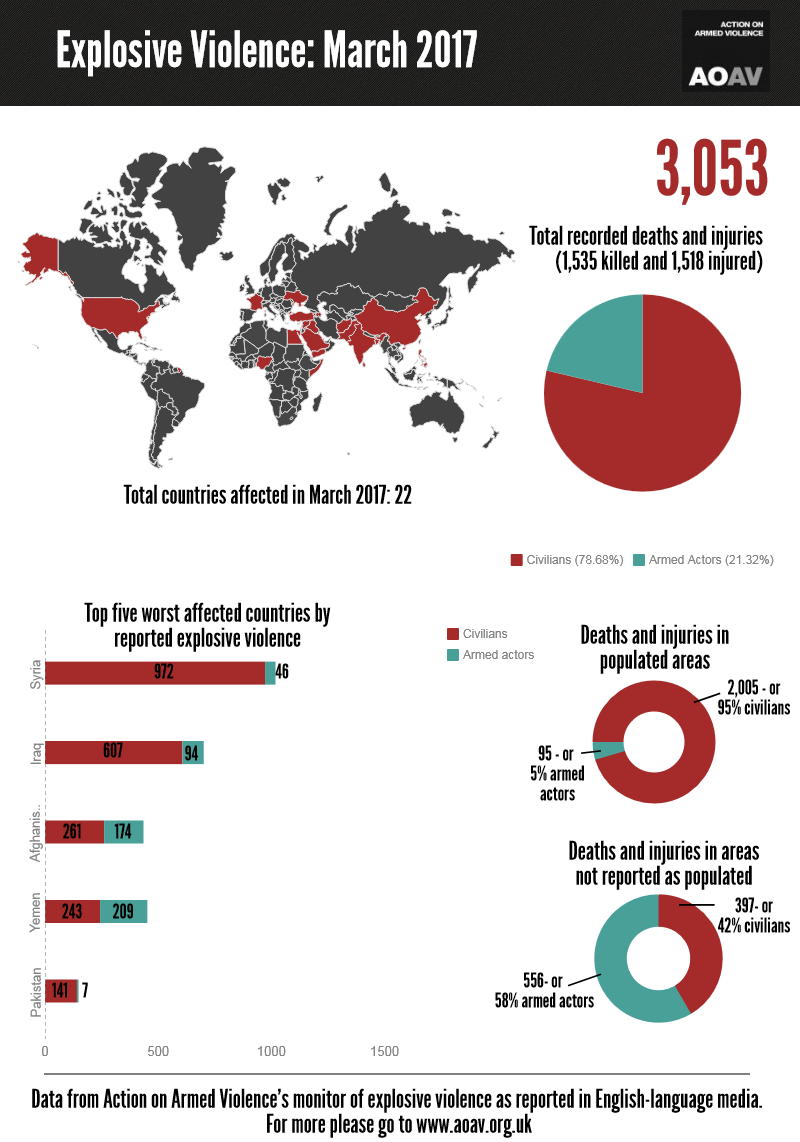