Yesterday, October 12th 2017, at least 50 people were killed in a triple suicide car bomb attack on a group of refugees in northeast Syria.

The attack took place at Abu Fas, in Hasakeh province, near Deir Ezzor’s border. Many have been displaced by the violence in Deir Ezzor. 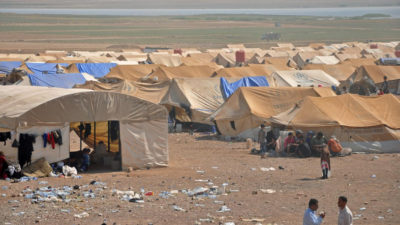 Most of the dead are thought to be those displaced by such conflict, as well as some members of the security forces.

More than 50 were also injured in the attack.

An SDF spokesman reported to AFP that after the blast, “the civilians escaped towards desert areas where mines exploded and the toll rose”.

Islamic State, who have lost large areas of their previous territory in recent months, claimed the attack.

Whilst the majority of civilian deaths and injuries from explosive violence in Syria were caused by state explosive weapons (56% or 7,500 civilians), non-state actors were responsible for at least 41% (5,493) – for remainder the perpetrator status was unclear.

Further, last year, Syria saw an 50 % increase in the number of casualties caused by IEDs, compared to the previous year.