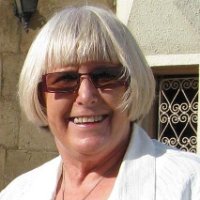 Kate Moore MBE, a guiding light for Action on Armed Violence, has retired from her role as chair of AOAV’s board.

Kate was appointed to the Landmine Action Board in December 2005 and was elected as Co-Chair of Action on Armed Violence in December 2011.

Kate’s working life has been varied and deeply fulfilling. Through the 1970′s and 1980′s, she worked as an HR specialist in the dairy industry, moving on to run her own Outplacement Consultancy for many years. In the late 1970′s she was invited to become a member of the Shropshire Committee for the Employment of People with Disabilities (CEPD) working with the Department of Employment, Manpower Services and local employers. Kate became CEPD Publicity Chairman in 1980, organising large events where local industrialists met with Government Ministers, increasing the opportunities for the employment of people with disabilities. She was later appointed as Chairman of the Committee (Cabinet Office appointment); worked in a voluntary capacity in the field for over 14 years, and was awarded the MBE for Services to the Disabled in the 1993  New Years Honours List.

Kate was elected to represent the Soroptimist International UK Programme Action Committee (UKPAC) on the Landmine Action Campaign Group from 2002 to 2006 and during these years worked on campaigns to increase awareness of landmines and other ERW during Landmine Action Awareness Week each year.

During this four year period, she set up UKPAC partnerships with Handicap International, Adopt a Minefield and the Soroptimist UKPAC were early members of the Cluster Munition Coalition. Kate has many years experience raising monies for and awareness of landmine issues as part of the Soroptimist four year project with the ICRC which funded activities in Georgia, Afghanistan and Angola, and was one of their Ambassadors for  “Project Independence – Women Survivors of War in the UK”. From  2007 to 2010 she was Director of Membership for Soroptimist International Great Britain and Ireland.

As a member of the Cluster Munition Coalition, Kate worked with the Coalition throughout the negotiations of the Oslo Process which resulted in the 2008 UN Convention on Cluster Munitions (CCM).

One of the highlights of her working life, as Kate herself says, was  “that as a Director of Landmine Action. I was at the UN in Geneva when the Norwegian Government announced the new Oslo Process which led to the UN Convention on Cluster Munitions.  I supported both our staff and campaigners at the initial meeting in Oslo 2007, at the  negotiations in Peru and Vienna in 2007, at the Government Meetings in New Zealand February 2008.  Working at the office in London, I helped to organise the CMC for the full (2 week) Government Conference in Dublin in May 2008 when the wording of the Convention was agreed.    Taking responsibility for anything (and everything) connected to transport, in Dublin I was christened ‘The Transport Goddess’!    (all that and my 65th birthday too)   I never lost or mislaid one of the 300 + campaigners…”

In terms of her work at AOAV, Kate says two things really stand out:

“Being the first organisation working to survey and clear landmines and cluster munitions in Polisario-controlled Western Sahara, clearing over 26 million square metres of land and destroying over 22,00 dangerous items and our work supporting the victims establishing survivor cooperatives of those injured by remnants of war.”

And “in 2007, the extension of our work in Liberia (which was to recover weapons and ammunition and conduct mine risk education).   The commencement of our Agricultural Training Programme for groups of ex-combatants, war affected youth and former child soldiers, so they could be re-integrated into society, giving them employment skills, and decreasing their potential to engage in violence.  The fact that over 6,000 young people passed through our Training Programmes.    Showing that breaking the circle of violence, and giving young people ‘the tools for employment’ changes lives.”

Kate has been an invaluable friend to AOAV over the years, we are very sad to say goodbye to her and wish her the best in her retirement.

The new co-chairs of AOAV are Olivia Dix and Quincy Whitaker.