The small Gulf kingdom of Bahrain has seen some of the most naked jihadi fundraising in the guise of charity, and also the most nakedly sectarian, led by Salafi clerics who have also been members of the Bahraini parliament.  The men have campaigned on behalf of groups fighting the Syrian regime and its Lebanese Shia ally Hezbollah (literally, ‘Party of God’), to which the clerics refer on social media as ‘the Party of Satan’.

In April 2013 Bahrain became the first Arab country to blacklist Hezbollah as a terrorist organisation.  The majority of Bahrain’s population are Shia, but it is ruled by Sunnis.  The 2011 Bahrain protests were not, however, a Shia uprising, as they are often misrepresented, but originated as an Arab Spring-style campaign for greater political and human rights in general.  Sectarianism as an issue in Bahrain tends to reflect regional tensions between Saudi Arabia and Iran, in which the Syrian conflict has played a part, and on which, as on most things, Bahrain’s ruling Al Khalifa family stands squarely with its powerful Saudi neighbours.

In July 2013, the Gulf Daily News reported that more than 500 Syrian families had received aid from people in Bahrain since the start of Ramadan, as part of the Gulf-wide but Bahrain-based “One Body” campaign “to support Syrians through the crisis”. Campaigners, it said, had collected thousands of dinars, which had been used to purchase non-perishable food, ambulances, bread-making machines and 100 portacabins to provide temporary shelter for the homeless.  A campaign organiser was quoted as saying that they were still receiving daily donations after evening prayers at Abu Hanifa Mosque in Busaiteen and Sheikh Al Farsi Mosque in East Rifaa.  “Some people are even bringing their wives’ jewellery such as gold bangles, chains and earrings to donate and help their brothers and sisters in Syria,” he added.  The paper said that MP Abdulhalim Murad of the Asala Islamic Society, an active supporter of the campaign, had visited Syria the previous month along with fellow Asala member Dr Faisal al-Ghorair and campaign co-ordinator Khalid al-Balooshi to distribute food and goods.  Murad had posted a YouTube video about the visit, which showed Syrian people receiving the donations and one of them thanking the Bahrainis for their help.

On Twitter, meanwhile, Murad was boasting of having successfully equipped 1,640 mujahideen through the ‘Tajhiz Ghazi’ (Equip a Warrior) Project to fight against the Party of Satan. The phrase ‘tajhiz ghazi’ recalls a saying of the Prophet that “he who equips a ghazi (warrior) in the way of Allah is as if he has taken part in the fighting himself; and he who looks after the dependants of a ghazi in his absence is as if he has taken part in the fighting himself”.  (See also 6.7, Islamic charities.)   In this sense, paying for weapons and ammunition can be seen as a form of proxy jihad.  Indeed, at one point speeches in Bahrain calling for jihad were said to have been common:  jihadist preacher Adel al-Hamad, licensed by the Bahraini Justice Ministry to pray at a mosque south of Manama, called on young people on May 24, 2013 to use their summer break to perform jihad in Syria.

In the tweet referred to above, Murad urgently called for BD 2.5 million ($6.6 million) to equip 2,500 more mujahideen, and solicited donations to the One Body campaign: 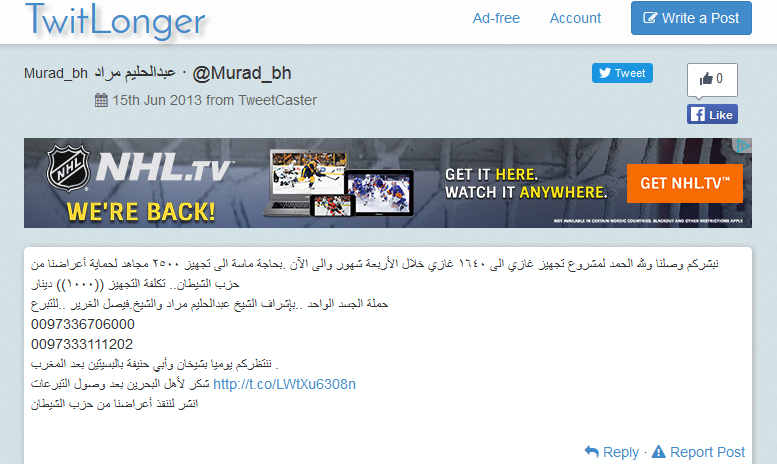 Translation:  Good news – praise God, so far the Tajhiz Ghazi project has delivered to 1,640 fighters in four months.  Critical need to equip 2,500 mujahideen to defend our honour against the Party of Satan; cost of equipping BD 1,000.  One Body campaign, supervised by Sheikh Abdulhalim Murad and Sheikh Faisal al-Ghoreir; to donate: [phone numbers, with Bahrain dialling code].  We await you daily at Shikhan [al-Farsi] and Abu Hanifa in Busaiteen after evening prayers. [Link] Thanks to the people of Bahrain after the arrival of the donations.  Post to save our honour from the Party of Satan

Ghorair was even more explicit in announcing the ‘good news’ in a speech to his followers in the Bahraini capital, Manama, in June 2013: ‘‘We are happy to tell you that we have sent arms and ammunition to the mujahedeen in Syria,” he said.

The previous month a tweet called urgently for funds “to equip 300 fighters for al-Qusayr (in western Syria, scene of major battles in the spring of 2013 between rebel groups versus the Syrian Army and Hezbollah) to confront the dogs of the Party of Satan” and gave contact phone numbers for Murad, Ghorair and al-Balooshi. It also carried a link to a video statement entitled ‘Help al-Qusayr’ in which a ragtag group of militants holding a variety of weapons including an RPG describe how they used earlier donations. 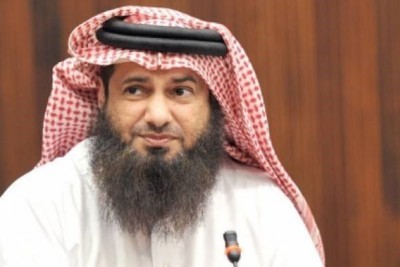 Offline, Murad, the head of the Asala bloc in the Bahraini parliament, was resisting the government’s modest attempts to curb terrorist fundraising.  On January 7, 2014 he abstained from voting on a bill to regulate the collection of funds for general purposes.  Article 14 penalised the collection of funds for terrorist purposes with imprisonment for at least ten years and a fine of between BD 100,000 and 500,000 ($265,000-1,325,000).  Writer Hani al-Fardan pointed out in Al-Wasat News that Murad was already breaking the Bahraini law that bans unlicensed fundraising and support for armed groups.  How, he asked, can the Bahraini parliament pass a law that is violated by its own members, with their parliamentary immunity?

Al-Fardan recalled how Murad had visited Syria in August 2012 with Ghorair, former head of Asala Sheikh Adel al-Mouawada, and Sheikh Hamad al-Mohandi, all of them MPs at the time, as “the delegation of the Kingdom of Bahrain”, and how Murad tweeted images of them meeting Free Syrian Army fighters.  Bahrain’s foreign ministry denied any prior knowledge of the visit, or any coordination with the so-called delegation, and Murad was subsequently reported to be suing Al-Wasat for defamation for accusing him of raising money for terrorist causes. A Tunisian TV interview with a jihadist claiming to have fought with the Free Syrian Army, however, appears to confirm the details of the Bahraini MPs’ visit.

In February 2014, the interior ministry warned citizens against taking part in fighting with opposition groups outside Bahrain or engaging in regional or international conflicts, noting that some Bahraini citizens had gone to join the fighting in Syria.  Interior Minister Lieutenant-General Sheikh Rashid bin Abdulla Al Khalifa ordered monitoring of social media accounts and websites that promote incitement or recruitment or offer any assistance or facilities for terrorist act, and said all financial transactions, donations and assistance for such purposes would also be monitored, and those involved arrested. No action was taken against Murad and his colleagues, whether because of their parliamentary immunity or because of the Sunni government’s partial definition of terrorism.  Gulf journalists nevertheless continued to question whether the Tajhiz Ghazi campaign had obtained a licence for its fundraising. Sheikh Adel al-Mouawada – one of the other Asala MPs who had travelled to Syria with Murad and appeared on video hugging Syrian fighters – was put on the spot by Al-Arabiya TV.  Al-Mouawada protested that what they had done was “all under the banner of aid work” and that “we do not need anybody’s authorisation to support our brothers who are dying in Syria”.  Al-Arabiya’s presenter persisted in asking whether the One Body and Tajhiz Ghazi campaigns had been licensed by the government as required by the law, but neither the Ministry of Social Development (which licenses charities) nor the Ministry of Justice and Islamic Affairs (which licenses political parties like Asala) managed to give a satisfactory answer.