Understanding the regional and transnational networks that facilitate IED use
Facebook6TweetLinkedInPinEmail

The situation has evolved but not fundamentally changed since US Treasury Undersecretary David Cohen described Kuwait, in March 2014, as “the epicentre of fundraising for terrorist groups in Syria”. On the one hand, the Kuwaiti government has at last started to implement measures to restrict the flow of private donations to extremist Islamist fighters; on the other, Kuwaiti support for Syrian opposition groups, which was already declining as a result of donor fatigue and disillusionment with jihadist infighting, has still not been halted. At the same time the State of Kuwait has been a major donor to international humanitarian relief efforts for the people of Syria.

Kuwait has seen fundraisers openly soliciting donations for armed groups in Syria, mainly those allied with Jabhat al-Nusra, since at least 2012.  These fundraising activities originally grew out of genuine humanitarian work by Kuwaiti NGOs predating the 2011 Syrian uprising and subsequent armed conflict.  Even more so than in Qatar, the Kuwaiti government and ruling family have felt a need to allow private citizens to support Islamist groups in other countries, including violent extremists, as a popular outlet for religious, political and humanitarian zeal.  This tolerance may also have helped to dampen criticism of the government from prominent Salafi preachers and Sunni politicians in the country, for taking a less active military role than other Gulf states in support of anti-Assad groups in Syria.

Private Kuwaiti money played a central role in arming a number of the biggest armed groups in Syria such as Ahrar al-Sham, Jaysh al-Islam, and Jabhat al-Nusra.  The Kuwaiti role sometimes involved creating military operations rooms and even directing the course of certain battles, such as in Hatla in June 2013. As the original rebellion against the Assad regime descended into a fragmented and increasingly brutal conflict, though, in which human rights violations and sectarian atrocities were routinely committed, some Kuwaiti donors withdrew their support.  The fundraising that continued took on a distinctly more anti-Shia tone.  This has fed into a vicious circle of increasingly bitter sectarian feeling back home in Kuwait, and in some other Gulf states, where it was not previously apparent.

Pressured to restrict terrorist fundraising activities, in 2013 the Kuwaiti government passed the Anti-Money Laundering and Combating the Financing of Terrorism Law No. 106 of 2013 and Ministerial Resolution No. 1532 of 2013 On Establishing the Kuwait Financial Intelligence Unit. Its ambivalence about this was made clear, however, when just a few months later, in January 2014, it appointed prominent Jabhat al-Nusra financier Nayef al-Ajmi as both Minister of Justice and Minister of Awqaf (Islamic Endowments) and Islamic Affairs.  Following his appointment, the Ministry of Awqaf announced it would allow non-profit organisations and charities to collect donations for the Syrian people at Kuwaiti mosques, a measure clearly vulnerable to exploitation by Kuwait-based terrorist fundraisers. Al-Ajmi was eventually persuaded to step down some months later.

In August 2014, the US Treasury Department imposed sanctions on two more members of the al-Ajmi family, Hajjaj Fahd Hajjaj al-Ajmi and Shafi Sultan Mohammed al-Ajmi, Salafi clerics who for years have been vigorously supporting groups allied to Jabhat al-Nusra through fundraising appeals on social media and the use of financial networks. Hajjaj Al-Ajmi has travelled regularly from Kuwait to Syria to engage in financial activity on behalf of Jabhat al-Nusra and deliver money to the group. Moreover, in 2013 a Jabhat al-Nusra media office directed followers on Twitter to send money to the organisation through al-Ajmi.

In June 2012, Al-Ajmi established a fundraising organisation called the “Popular Commission in Support of the Syrian Revolution”, and in mid-2013 he helped launch the “Mobilisation of the People of Qatar Campaign for the Levant” to raise funds for jihadist fighters in Syria. The Popular Commission solicited funds through its own Twitter account and Hajjaj al-Ajmi’s personal Twitter account for the purchase of weapons and artillery in support of jihadist groups in Syria.  Several Syrian groups acknowledged such gifts with online thank you notes in the form of YouTube videos and Facebook postings that have since been removed from the web. In 2012, the Syrian Revolutionary Front, an Islamist organisation with ties to the Muslim Brotherhood, acknowledged receiving nearly $600,000 from the Popular Commission, and Ahrar Al-Sham, one of the most radical Syrian Islamist militias, recorded a similar public thank you for $400,000 it said it had received from the same source.

Despite several attempts by social media platforms to shut down his accounts, as of April 2016 al-Ajmi was still active on Twitter, Instagram and Snapchat, with over a million followers. 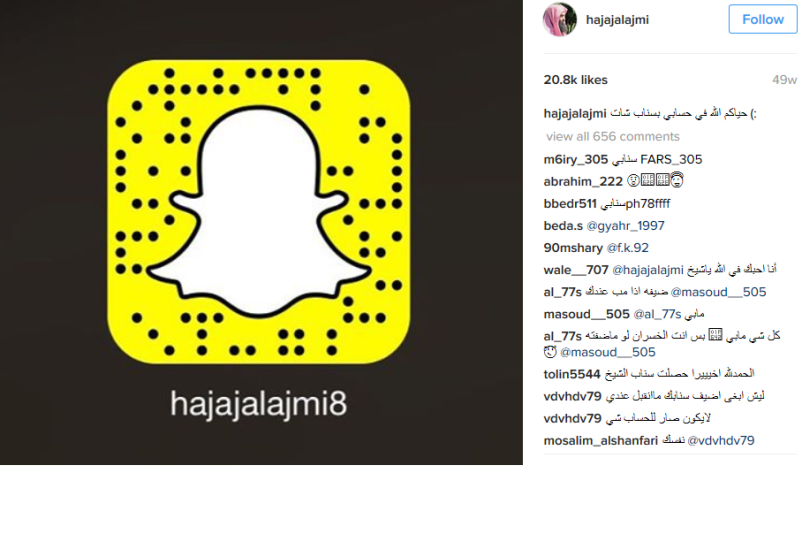 Sheikh Shafi al-Ajmi (pictured below) can also be seen in a YouTube video addressing a cheering crowd in front of the Lebanese embassy in Kuwait on June 11, 2013, appealing for funds to arm 12,000 mujahideen in Syria. He asked the mujahideen to save ten captured (Shia) Hezbollah members for him to have the ‘pleasure’ of slaughtering them personally on a future visit to Syria.  Shafi al-Ajmi was briefly detained and interrogated on returning to Kuwait from Mecca with his family in August 2014, shortly after the US sanctions on him were announced. 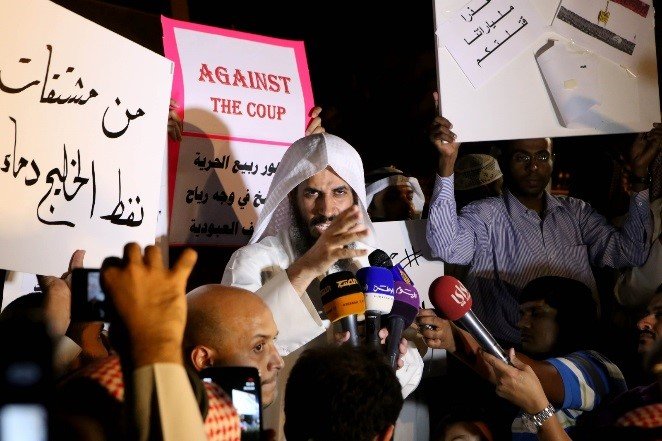 The previous month, according to the US Treasury Department, he had publicly admitted that he collected money under the auspices of charity and delivered the funds in person to Jabhat al-Nusra, as well as purchasing and smuggling arms on the group’s behalf.

In June 2015, at a time of heightened security fears in Kuwait, after a suicide bombing claimed by IS killed 27 worshippers at a Shia mosque in Kuwait City, the authorities took the unusual step of permanently closing down a local charity that had long been collecting donations for Syria.  According to the Kuwaiti daily Al-Ra’i, the Ministry of Social Affairs and Labour shut down the Sheikh Fahd Al-Ahmed Humanitarian Society for failing to pass donations through the official channels, despite repeated warnings.  (The previous year, in August 2014, the ministry had instructed the same charity to close down three of its branch operations.)  The daily Al-Seyassah said the Fahd Al-Ahmed Society had not been licensed to collect donations.  It also reported that the ministry intended to reprimand three more charity organisations for collecting donations without a licence, and to get them to sign undertakings not to repeat the violation, on pain of having their accounts suspended.

The Kuwaiti government was already said to be tightening up its oversight of charities’ finances, for fear of their being exploited for “terrorist activities”.  In May 2015, it was reported to have announced measures including a ban on donations in cash, and a requirement for donors to present identity cards. Al-Seyassah quoted a ministry source as saying there had been far fewer charity violations in 2015, presumably during the run-up to Ramadan when Islamic charities conduct their major fundraising drives, than in the previous year.  Most violations were by “individuals on social media”, or unlicensed collection booths in newly developed areas.  The ministry had written to the municipality asking it to remove the booths, and had asked the Ministry of Communications to cut off 40 phone lines that were being used to collect donations without the requisite licences.

Nevertheless, suspicions continue to be raised regarding the Kuwaiti charity sector.  As recently as September 2016, a Kuwaiti diplomat felt the need to deny unspecified media reports accusing Kuwaiti charities of funding terrorism.  Ambassador Nasser Al-Sabeeh said the charities were firmly committed to the country’s laws and regulations, and “I’m 100 percent sure that not a single fils from Kuwait goes to any terrorist organisation or person in any part of the world”.  Kuwait’s national news agency quoted him as saying that “there is a solid coordination between the Foreign Ministry and the Social Affairs and Labour ministry in that regard”.

Meanwhile in mid-2015 the Kuwaiti authorities sentenced five individuals to ten-year prison sentences for forming an IS recruitment and fundraising cell.  Cell members admitted to having transferred more than $400,000 in donations to IS since 2012 under the false pretext of providing humanitarian supplies to refugees, according to local media reporting. Al-Jarida listed charges against them that included hostile acts against a foreign government (Syria), membership of a proscribed organisation (IS) and financing terrorist acts.  “In its landmark verdict,” said the paper, “the court appealed to the security, media and educational establishments to strengthen the bonds of cooperation between them and act under the guidance of the Islamic Sharia, in the light of its luminous directions and lofty values that call for goodness, righteousness and concord, with the aim of fortifying society against crime and terrorism.”

However, while the State of Kuwait thus appears to have taken a robust approach to these IS facilitators, no prosecutions or convictions of AQ or Jabhat al-Nusra fundraisers, after years of designation as terrorist financiers, have been announced to date.