As we have already seen in section 5.2, the government and ruling family of Qatar have been staunch and longstanding backers of AQ.  They have, in addition, funded and given shelter to key figures in the Taliban and Hamas.  In the teeth of strong opposition from their powerful neighbours in Riyadh and Abu Dhabi, the Qataris have also maintained close and supportive ties with several regional affiliates of the Muslim Brotherhood, which Saudi Arabia, the UAE, Bahrain, Egypt, Syria and Russia hold to be a terrorist organisation.  In Libya, for example, where Qatar and the UAE both supported anti-Qaddafi rebel groups in 2011, Qatar’s continuing support for Muslim Brotherhood-linked groups in the post-Qaddafi era has been countered by UAE proxy support for rival, anti-Islamist, Libyan militants.

Allowing private local fundraising for radical Islamist groups abroad has long formed part of Doha’s domestic security strategy, as an outlet for Islamist political energies at home. As a small (however fabulously wealthy) player in a tense region of the world, sandwiched uncomfortably between neighbourhood giants Iran and Saudi Arabia, Qatar has cultivated a wide range of external friends and allies, including the US and Europeans, in the hope of warding off a variety of potential threats.

The relaxed approach of the Qatari authorities to the financing of Islamist groups, including those designated as terrorist, is well illustrated by the case of Abdulaziz Khalifa al-Attiyah, a cousin of Qatar’s foreign minister.  In 2012 al-Attiyah was arrested in Lebanon following a tip-off from Western intelligence agencies that he was using Lebanon as a base for passing funds to Jabhat al-Nusra.  He was released shortly afterwards after alleged diplomatic lobbying on his behalf by the Qatari authorities, who dismissed al-Attiyah’s arrest as politically motivated.  Shortly after returning from Lebanon, al-Attiyah received a lifetime achievement award from the Qatar Olympic Committee, chaired at the time by Qatar’s current emir, for his services as head of Qatar’s Billiards and Snooker Union – hardly pariah status.  When his case came to court in Lebanon in June 2014 he was found guilty in absentia on charges that included providing financial support to terrorist organisations, and was given a seven-year jail sentence. In the mean time, in 2013 al-Attiyah associated himself with the Madad Ahl al-Sham campaign in aid of Jabhat al-Nusra (see below).

Since then, however, Qatar has issued new charity supervision and cybercrime prevention laws.  Law No. 14 of 2014 penalises use of the Internet for unauthorised fundraising in support of terrorism.  Under Law No. 15 of 2014, which regulates the work of charities oversight based on FATF standards, local charities must obtain authorisation from the newly established Charities Commission prior to any dealings with foreign entities. The Qatar Central Bank scrutinises charities’ overseas transactions to ensure compliance, and the government issues directives to local charities prohibiting them from transferring funds to several overseas charities suspected of engaging in illicit activities.

In 2015, following much external criticism, the Qatari government froze assets and imposed travel bans on Qatari citizens Sa’ad al-Ka’abi and Abdullatif al-Kawari after they were designated as terrorist financiers on the UN al-Qaeda Sanctions List.  However, according to the US State Department’s 2015 country report on terrorism, “despite these efforts, entities and individuals within Qatar continue to serve as a source of financial support for terrorist and violent extremist groups, particularly regional al-Qaeda affiliates such as the Nusrah Front”.

Qatar was furthermore deemed a Jurisdiction of Concern as recently as this year in the State Department’s 2016 International Narcotics Control Strategy Report, which found that “the exploitation of charities and private donations to finance terrorism continues to be a concern, as does the ability of individuals to bypass the formal financial sector for illicit financing”.

Historically, considerable financial and material support for AQ and, more recently, for Jabhat al-Nusra in particular, has been channelled through Qatar-based Islamic charities.  Most notable among these has been Qatar Charity (formerly the Qatar Charitable Society), founded in 1992, directed by Sheikh Hamad bin Nasser bin Jassem Al Thani, and described in 2008 by an inter-agency US task force as a “terrorism support entity”. Qatar Charity was cited by Osama Bin Laden in 1993 as one of the charities used to channel financial support to AQ operatives overseas; it later funnelled money to AQ operatives in Chechnya.  In 2012-13 Qatar Charity was active in northern Mali when it was overrun by Islamist groups, and was accused of supporting Ansar Dine and MUJAO, AQIM allies in the area.

Another prolific Qatar-based fundraiser for Jabhat al-Nusra, until it was finally shut down by the authorities in 2014, was the programme called “Madad Ahl al-Sham” (Aid for the People of Syria).  Toward the end of 2013 Jabhat al-Nusra acknowledged Madad Ahl al-Sham as one of its preferred conduits for funds.  Madad Ahl al-Sham, although no longer operating, provides an excellent case study on the blurring or commingling of humanitarian and terrorist fundraising.  The campaign worked under the umbrella of the government-supervised Qatar Centre for Voluntary Work, and in 2013 was reported in the local press to have 50 young volunteers collecting and parcelling up in-kind assistance for the suffering people of Syria.  The campaign thanked the Saudi and Jordanian authorities for their cooperation, and claimed to have been granted a one-year permit to transport goods across Saudi Arabia. 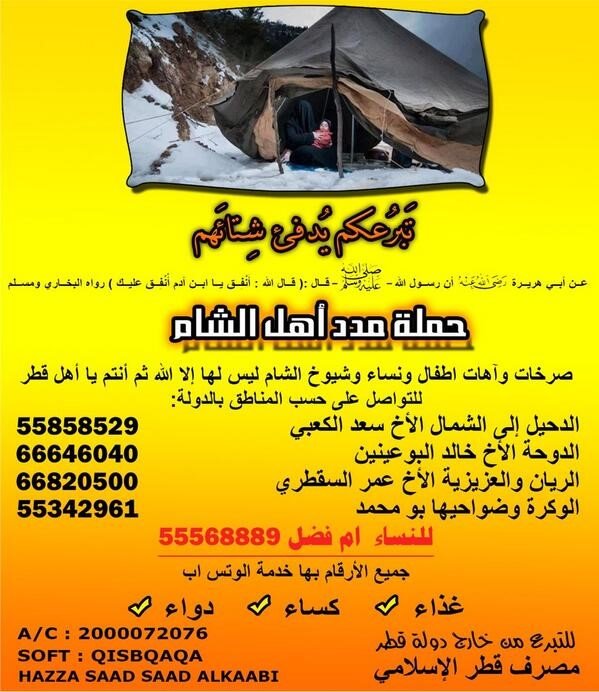 This Madad Ahl al-Sham poster, which incidentally includes the name and phone number of Specially Designated Global Terrorist Sa’ad bin al-Ka’abi, emphasises the relief of winter hardship, but the one below (also with his name and number) presents a more militaristic image. 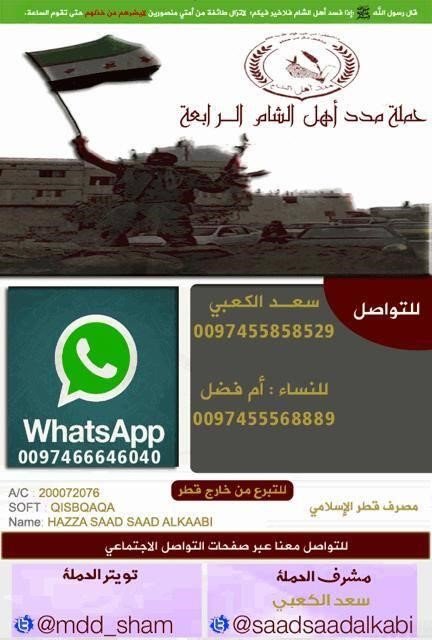 Retweeted Twitter messages attributed to Madad’s media coordinator, Mohamed Helwan al-Seqatri, stated that Madad “supports the mujahideen with weapons and ammunition” and “gathers your donations to cleanse the rafidhis (pejorative term for Shia) from Syria”.  The campaign was also blessed by AQ-linked cleric Abdullah al-Muhaysini of Saudi Arabia and Hamid Hamad al-‘Ali, a Kuwaiti preacher now under US and UN sanctions who has previously declared himself an “al-Qaeda commando”.