On 7 July 2005, four suicide bombers killed 52 people when they detonated IEDs on three London underground trains and a bus. 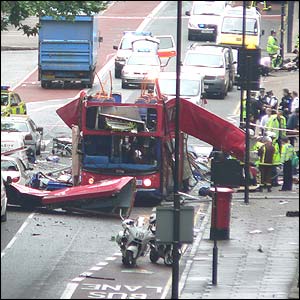 Police estimate that about 4,000 people were involved in the blasts in some way. The role of the emergency services in the immediate response and assistance to victims was free, as is provided under the UK Healthcare system. It received mixed feedback, due to delays in the dispatch of ambulances and inadequate deployment of resources.

A number of medical staff were called off rota, but critics claim this created confusion because many were untrained in emergency procedures.

Fire services were hindered by certain safety protocols, which delayed response time. Issues regarding lines of communication between agencies seemed to impede delivery times and a lack of information sharing meant that telephone operators were often working in the dark.

Going forward, the shortfalls in response were listened to and acknowledged. For instance, both the British Transport Police and the London Ambulance Service quickly developed a communications and control network that can handle multiple major incidents all at once; and more appropriate medical kits in more locations, were issued to deal with future incidents.

The Criminal Injuries Compensation Authority (CICA) provided victims of the London bombings with compensation as it does for all victims of crime.

A total of £11 million in compensation was granted by CICA in 650 compensation claims. Many of those pay outs were for the maximum £500,000 allowed under the scheme.

71 claims were rejected either because the applicant was not an actual victim of the attacks or because their injuries were not deemed severe enough.

Compensation is a deeply sensitive issue and many criticized how it was handled. Criticism focused around delay of funds being released, as well as the refusal to compensate indirect victims of the attack – who suffered loss of earnings within families. For the former, CICA believed the delays in compensation were in the best interest of the victim, in order for them to receive the fairest compensation package.

In the case of stratifying the compensation owed for physical injury, the identification procedure was quite straightforward. Those admitted to hospital were automatically in the ‘system’. The challenge of this though, is that there were some with no physical injuries, many even going straight back to work.

The Camden and Islington Mental Health Trust was the main trust charged with coordinating follow up services, specifically with relation to psycho-social treatment. The people who went through the treatment were captured through health protection agency lists from hospitals, GPs, the police, NHS Direct and a media campaign.

This programme was funded for two years from 2005. 20-30% of people who went through the scheme were identified as having long-term mental health implications. Post-traumatic stress disorder (PTSD), depression and travel phobia were listed as some of the common impacts of the 7/7 attack.

The programme mandated a body to act as a central co-ordination unit with other trusts. Such centralisation was deemed to have improved efficiency as a common acknowledgment is that there is a lack of psycho-social support for many victims of IEDs and many get lost in the system.

Such shortfalls mean that many victims of the attack turned to informal mechanisms, including community run groups like Kings Cross United or online forums. Such informal responses have a role to play. For instance, one patient was unlucky enough as to have also been caught up in a previous terrorist attack. They were only reassured after being taken to a bookmaker to see the odds of being in a third. However, such ad- hoc provision cannot replace formal crisis counselling.

The response to victim assistance in the wake of the 7/7 bombing as a whole was governed by statute, laid out in the British Civil Contingencies Act 2004 (c 36), which has established the framework for emergency planning and response in both local and national contexts.