On April 15 2013, a terrorist attack took place a short distance from the finish line of the annual Boston Marathon, where two homemade bombs were detonated amongst the crowd watching the race. Three people were killed and 260 injured. 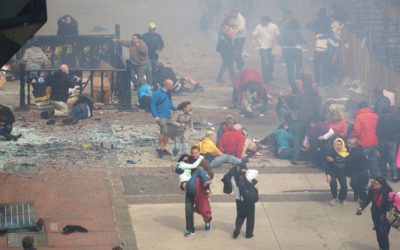 Overall, the immediate medical response, including that of the emergency services was a product of a well-prepared city. Bystanders attended to the wounded and emergency services had specialised kit on hand for excessive blood loss. Within 18 minutes victims reached hospital and 25 hospitals were utilised. Some of these had disaster plans in place. Notably nobody who arrived at each of the hospitals alive, died.

A few factors contributed to this overall lauded response: the proximity of trauma centres and hospitals meant none were overburdened. As it was a marathon, there were already emergency services at the scene and roads were free of traffic, enabling quick extraction.

US involvement in recent conflicts also meant the skills in dealing with the injuries were instilled in many of the hospital staff and emergency plans had also been tested shortly prior to the attack.

Victim compensation for the Boston Marathon victims was primarily addressed through what’s known as the Victim of Crime Compensation Fund (VCF). This was administered at the state level rather than federal level, through the Attorney General’s Office and is for victims of violent crime.

The definition of victim was applied to those directly affected but included those that suffered physical injury as well as psychological and any loss of earnings as a result of either.

The range of compensation was between $25-50k per victim, depending on the severity of injury, although many received the upper cap.

Informal mechanisms also operated as complementary to official funds. The One Fund, for instance, received a great deal of public support and $61 million was donated over 75 days. This was distributed to victims falling into a variety of categories of injury severity, although the donations were not means tested.

This may have caused some consternation – many did not agree on their categories they were placed in and individual circumstances were not considered. The charity responded to criticism by performing needs assessments and by consulting medical staff. They eventually put the remainder of the funds into services to enhance its impact.

A general shortfall of IED victim redress, is that of responding to the psychological injuries wrought from the attack. In this regard, the Boston bombings were no different even though the VCF did provide compensation to those who suffered psychological impact such as PTSD. The One Fund was notable for having restricted their pay outs to those physically injured.

There was also a failure to recognise Traumatic Brain Injury (TBI), which some of the survivors experienced and were diagnosed with after some time. It has affected the victims’ mental and psychological faculties, affecting speech and memory.

A longer term Family Assistance Centre was set-up for those injured and their families, which helped establish what services were available.

A number of other pro bono initiatives assisted victims via legal assistance, employment, benefits and adapting accommodation to new-found disabilities. For instance, a Resilience Centre opened in 2014 to provide support for anyone affected by the bombings.

The Centre was approved by the AGO, overseen by the Massachusetts Office of Victim Assistance (MOVA), managed by Boston Medical Centre and funded with up to $1.9 million, using federal grant money administered by the US Department of Justice’s Office for Victims of Crime (OVC).

The OVC administers an Antiterrorism Emergency Assistance Program Grant (AEAP) established by Congress after the Oklahoma City bombing, 1995. It can provide $50 million annually to assist victims in extraordinary circumstances. State departments can apply for this grant to cover costs for organisations providing crisis intervention, trauma-informed counselling, physical and vocational rehabilitation services, services for the deaf and hard of hearing and other services essential to victim recovery and healing.