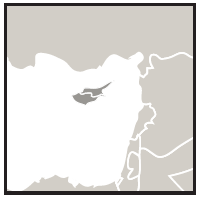 Cyprus has seen little death or injury from IEDs. However, there have been many incidents where IEDs were used to cause damage to buildings or property. Additionally, there are often failed IED attack attempts in Cyprus. In general, the IEDs seen in Cyprus are not made with the same kind of sophistication as that seen in neighbouring countries.

The Cyprus Police has a bomb squad as part of their Criminal Investigation Office. The bomb squad is responsible for giving advice to the public about suspicious objects. They make the public aware of the dangers and how to contact the police if they encounter what may be an IED. The bomb squad may also utilise the police force’s dog unit within the force as the dogs are trained in discovering explosive substances such as those found within IEDs.

The bomb squad work in cooperation with the Counter Terrorism Office, who takes on more of the attack the network responsibilities of C-IED. The Counter Terrorism Office coordinates operations to target terrorist groups and organise training. They take the lead on information sharing efforts in regard to explosives and terrorists between other governments and international organisations, such as INTERPOL.

In May 2015, Cypriot police arrested a Lebanese-Canadian national, Hussain Abdallah, after a surveillance operation indicated he was stockpiling explosives. The police seized over eight tons of ammonium nitrate chemicals, often used for manufacturing explosives, in the basement of his temporary home. Abdullah admitted he was working for Hezbollah’s External Security Organization and acknowledged to Cypriot investigators that the explosive pre-cursors were for an IED to be used against Israeli targets in Cyprus and other places in Europe. The seizure of that much ammonium nitrate was one of the largest confiscations ever seen of this chemical.

The UK has delivered £300,000 worth of C-IED equipment requested by Cyprus for detection, decoying, disposal and jamming, for military C-IED use.

Cyprus has engaged in counterterrorism efforts with the US, particularly the ATA and Regional Strategic Initiative programs.

In regard to the financing of terrorism Cyprus are also a member of the Committee of Experts on the Evaluation of Anti-Money Laundering Measures and the Financing of Terrorism (MONEYVAL). MONEYVAL’s efforts since 2001 have also included countering terrorism financing.

International C-IED efforts in Cyprus have seen the government engaged in the International Counter ISIL coalition. Cyrus has allowed the UK to base strike aircrafts in their bases, for the UK to carry out aid drops and air strikes in Iraq. They have also allowed the same for France.

The Cyprus National Guard also took part in an international terrorism exercise organised by the EDA in Sweden. The exercise, Bison 2016, took place in August 2016 and particularly engaged with C-IED techniques and terror attacks using IEDs. A wide range of members of the National Guard took part, including those from bomb squads, intelligence, Navy SEALs, and CBRNe experts.