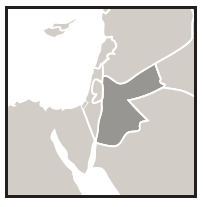 Jordan believes it is a likely target of terrorist acts due to its relationship with the West, particularly the United States, and its peace treaty with Israel. The threat is seen to mainly stem from external terrorist groups, and the country’s location between conflicts in Syria and Jordan is another cause for worry.

Although all Jordanian security forces undergo counterterrorism training at the King Abdullah II Special Operations Training Center in Amman, it is the General Intelligence Directorate (GID) that is in charge of investigating terrorism-related crime, often with the assistance of the Public Security Directorate. In response to IS, GID has modified its strategies to counterterrorism, particularly in the areas of intelligence gathering on IS and Jabhat Fateh al-Sham. Their investigations have led to the arrest of terrorists and the prevention of attacks during which weapons and explosives have been seized.

The GID also coordinates with the air forces, with which they share responsibility, on border security issues. The Jordan Border Security Program (JBSP), which began in 2009, saw many improvements to border security. These improvements have included sensors to alert to and prevent illegal border crossings. The monitoring at border crossings and other entry points also increased. At these points, terror watch lists as well as biographic and biometric screening are used. All border guards and law enforcement receive one to two months intensive training at the King Abdullah Special Operations Training Center.

Jordanian customs have also seen improvement through the use of more advanced equipment to detect chemicals and explosives brought into or out of the country. These are used to examine all goods and luggage. The devices are portable and can also detect dual-use goods. The new devices are part of the efforts to improve customs capacity through improving speed and accuracy of examinations.

Jordan has also engaged in efforts to counter radicalisation, particularly through mosques and among the country’s youth. This has seen civil society work in schools, universities and other important youth areas to reach out to young people and promote moderate Islam and community cohesion. The government has also encouraged mosques and preachers to refute extremism and promote moderate Islam to stop radicalisation through religious institutions. In November 2014, the Ministry of Awqaf and Islamic Affairs announced 25 radical preachers had been prevented from giving sermons, as part of this strategy.

However, since terrorism has increased in neighbouring states, particularly through IS’ advances in Iraq, it has led to a strain on Jordan’s economy. Whilst more funds have been required for the defence budget, and despite the efforts to counter extremism, strains on the economy and the continued rise in occasionally violent Salafism, an ultra-conservative strand of Islam, has seen many youth engaged in extremism.

The NCDR was established in 2000. They coordinate and supervise all programs and activities related to mines and Explosives Remnants of War (ERW) including:

Jordan has been working throughout the last two decades to free its land from the threat of landmines due to the threat it posed to the social and economic development within the affected regions and to the safety of individuals living there.

The NCDR was able to announce Jordan as a land free of mines from all known mined areas in 2012 – the first Middle Eastern country to complete this mission. The demining saw them remove more than 300,000 anti-personnel and tank mines in the Jordan Valley, Wadi Araba, and the northern areas.

The training efforts include many related to bomb disposal, safety and identification, in regard to many forms of explosives. The aim of the NCDR was to enhance the peace building process by diminishing social, economic and environmental impacts of landmines and remnants of war in a way that provides a better humanitarian environment. NCDR hoped to achieve their aims through comprehensive leadership and technical guidance on eradicating landmines and ERW.

Most of NCDR’s work now focuses on the rehabilitation of the victims that remain in Jordan. However, they also continue to develop their C-IED capabilities. In this respect, the NCDR believe they require “advanced training to deal with the latest IED technologies”.[i]

Jordan and the US have provided training and demonstrations for the Iraqi forces to aid in their C-IED and more general counterterrorism efforts. Much of this training has taken place in the King Abdullah II Special Operations Training Center in Amman.

As part of its requirements under MENAFATF, Jordan has sought to improve its ability to address terrorism financing. This saw Jordan bring its legislation up to international standards. Despite this, there have not been prosecutions for terrorism financing and these improvements still do not see non-profit organisations file suspicious transaction reports.

As part of the Global Coalition to Counter ISIL, Jordan took part in coalition military operations in both Iraq and Syria. Jordan hosts the US and other coalition members for operations, training and other coalition meetings. They have also allowed the use of their air bases and training facilities for coalition states. As a member based in the Middle East, Jordan also has a particular role in preventing terrorist fighters joining those in Syria and Iraq, and in preventing financing for terrorism.

Jordan is a founding member of the Global Counterterrorism Forum (GCTF), an international forum compiled of 29 countries and the EU.  The GCTF sees counterterrorism experts apply their expertise to develop tools and strategies to combat the terrorist threat. Jordan is also a board member of the International Institute for Justice and the Rule of Law (IIJ), a law-based institution that provides training to law makers and enforcers on how to address terrorism and other transnational crime that came about through the GCTF.

The NATO C-IED COE have also organised training courses to support the Jordan forces and law enforcement, including a C-IED awareness course in November 2015. The course covered IED threats, and C-IED capabilities.

[i] According to the NCDR (Jordan) questionnaire response.