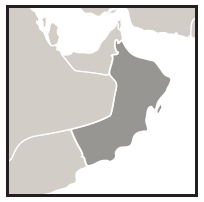 Oman has not suffered any IED attacks since AOAV started monitoring explosive violence. However, Oman’s neighbouring states are highly impacted by IEDs and terrorism, particularly Yemen. Given its position in the Middle East and its cooperation with Western states, such as the US and UK, it has the potential to be a valuable target to terrorist groups.

As Oman’s primary insecurity is the border with Yemen, border security has remained a vital component of Oman’s efforts to prevent IED and other terrorist attacks in the country. The border with Saudi Arabia is also of concern. Over the last few years Oman has been engaged in building a border fence along its boundary with Yemen. This aims to prevent unregulated entry into Oman, which can benefit terrorists and smugglers.

The policing system is relatively new to Oman, who only 40 years ago conducted internal security through walis, who acted as a type of local governor. Now, internal security is governed by the Royal Oman Police (ROP). They are responsible for carrying out terrorism investigations, customs and border security. The Special Task Force of the ROP is accountable for dealing with explosives, and monitors the use of commercial explosives. The Special Task Force are on call to respond to emergencies.

To counter violent extremism, Oman has engaged in efforts such as “Islam in Oman” – a campaign aimed at promoting tolerance. Interfaith dialogue has also been promoted as part of the government’s projects.

Oman has received training from US government. As border security is a principal concern, Oman has frequently engaged in the US’s Export Control and Related Border Security programs. Oman is also a participant in the US Antiterrorism Assistance (ATA) program. This has seen further training provided to Oman on border security, as well as cyber security and investigations. In 2014, the Royal Oman Police Customs Agency in Muscat conducted a week-long Chemical, Biological, Radiological, Nuclear, and Explosives (CBRNe) Commodity Identification Training and Interdiction Tabletop Exercise, with the assistance of the US. This aimed to strengthen Oman’s ability to detect and interdict smuggled materials of this kind.

Oman is also assisting the US. Oman has accepted many of the Guantanamo inmates that have been released for resettlement and has insured proper security and humane conditions for them. They have also provided a diplomatic channel between Middle East states and the West, as well as intelligence for counter terrorism operations.

As a member of the GCC, Oman’s C-IED capabilities have benefited from workshops on customs control.

Oman is a member of the Global Coalition to Counter ISIL, and has pledged to provide military support, humanitarian aid, and to assist in halting the flow of funds and fighters to the group. The country has been commended by the US for their contributions. However, it is not clear exactly what Oman’s contribution has been, though it has been reported that the country generated no foreign fighters serving in Iraq and Syria, as of September 2015.

Oman is also involved in the counter terrorism efforts of the Arab League and the OIC.

In recent years it is mostly commercial entities that helped Oman improve its C-IED and counterterrorism capacity.