Syria presents a very different C-IED approach as the country is almost wholly divided by civil war. However, IEDs have brought even more suffering to an already devastated population. Between 2011 and 2015, Syria saw 8,659 deaths and injuries from 307 IED incidents. Of these casualties, 81% (7,027) were civilians. However, after the colossal increase from 2011 to 2012, following the escalation in fighting, the amount of IED incidents since 2012 has decreased, as have the casualties. However, the lethality per IED attack has increased.

Due to the escalation in fighting and the accompanying IED attacks, it has been difficult for many national entities to engage in C-IED activities. The government is focused on their own agendas and with a nation so divided, a C-IED strategy would be difficult to develop. C-IED efforts have hence mostly taken the form of airstrikes on terrorist groups, targeting IED factories and perpetrators, and as part of larger counter-terrorism initiatives, although these airstrikes also target non-terrorist rebel groups. It is also important to highlight that Syria has for a long time been considered a state sponsor of terrorism. This has allowed groups such as IS and al-Qaeda to flourish and carry out attacks both internally and externally.

These initiatives have seen states, as part of the US-led coalition, operate airstrikes on armed group targets, such as IS. The coalition efforts that see the destruction of terrorist group members and their facilities prevent many IEDs from being made and deployed. Further military operations, such as those of Operation Inherent Resolve, have seen even greater success. Only recently, control of Manbij was retaken with OIR assistance. Syrian Democratic Forces are in the process of clearing the city to make it safe for civilians to return.

Syria is a member of MENAFATF. However, as most business transactions are conducted in cash, monitoring or investigating suspicious transactions is made rather difficult. There is also concern that the government is involved in terrorist finance schemes.

The IED concern in Syria for most of the world is caused by IS. Hence, the Global Coalition to Counter ISIL has operated in Syria in an effort to combat the IS threat. Over 15,000 air strikes have been conducted by the coalition in Iraq and Syria. The flow of foreign terrorist fighters to Syria and Iraq has decreased, whilst many are also leaving the group. IS fighters’ salaries have seen cuts and their ability to recruit has diminished.

Despite the challenges to operating C-IED programs in Syria there are a few that have carried out work, such as clearance, risk education, data collection, capacity building and victim assistance.

UNMAS is one of the C-IED actors operating in Syria. In response to the threat posed by IEDs and other ERW, UNMAS deployed to southern Turkey in August 2015, where they could begin operations to provide assistance in Syria. UNMAS provides overall coordination for the mine action sector and partners, technical support and oversight, and has supported direct implementation of clearance and risk education activities. Their initiatives have included clearance as well as risk education which is especially important for those returning to Syria and recently liberated areas.

UNMAS has already been responsible for the 14 tonnes of ERW that have already been destroyed in the city of Kobane on the Syrian-Turkey border. This has allowed significant amounts of land and buildings to be declared safe for use again for the community. Furthermore, it has prevented the potential prospect of the explosives being utilised in the creation of more IEDs in Syria and bordering areas. UNMAS’s work has also included victim assistance. This allows survivors of IEDs and other explosives to receive the help they need.

Given the nature of the conflict in Syria and the scale of the IED threat, clearance of IEDs has not been possible in most of the worst impacted areas. Therefore, UNMAS has focused on training to improve local capabilities in responding to the threat. Ongoing conflict in many governorates prevents access by humanitarian mine action organisations. The extent and impact of contamination has resulted in Syrians with no formal training conducting ad hoc clearance without the technical ability to do so. The capacity of some local teams conducting clearance has been reduced by half as a result of casualties occurring during operations. While a comprehensive humanitarian clearance programme is not currently possible, UNMAS believes it is possible to train local capacity to survey and clear cluster munitions and other ERW. Since these areas are inaccessible to qualified international staff, capacity building adapted to the threat as well as the needs of communities will be the key to reducing the threat. To address this, UNMAS is providing a training and mentoring programme for national organisations in to deal with specific explosive hazards safely.

Training has focused on clearance, awareness raising and risk education. This will not only help local responders but also civilians looking to return home. In the latter half of 2015, UNMAS partners reached 110,000 people in Syria and provided safety briefings to 166 United Nations and non-governmental humanitarian staff.

Other actors have provided C-IED assistance from a far. Similar to Iraq Body Count, the Syrian Observatory for Human Rights (SOHR) and the Center for Documentation of Violations in Syria (VDC Syria) have continued research and data collection in relation to the violence in Syria, including IEDs, often using sources on the ground. 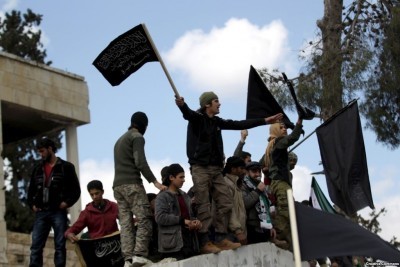 The VDC has been monitoring human rights violations in Syria since April 2011. The group documents deaths, including names where possible, detainees, those who are missing and those who are kidnapped. Statistics are published on a weekly, monthly and yearly basis, with total figures and graphs available on the website. Extensive information is recorded for each death, with information including, where possible, name, status (i.e. civilian or non-civilian), ID card number, event location, cause of death and notes. The records also include photographs where possible, and further information which generally contains notes on specific weapons.

The VDC has more than 30 activists in several Syrian cities and regions, and a team of coordinators who live both inside and outside Syria. Those activists inside Syria gather and document information on human rights violations. They also depend on “reliable sources like field hospitals, cemeteries, casualties’ families and some of the media centers”. Initial information is collected the day of, or in the days following, an incident. In the days, weeks, and months after, lists of those who were killed are sent to the field activists to ensure that there are no errors and that as much information as possible is contained in each record.

The data is not broken down specifically enough to determine the number of deaths caused by IEDs in Syria. While such information is contained in the notes of each record, it is not easily searchable. The data can however be downloaded and used for analysis.

SOHR has a similar utility. SOHR was established in May 2006, initially to raise awareness of human rights and freedom of speech violations in Syria. Rami Abdelrahman, a Syrian national who now lives in Coventry, England, runs the organisation. In March 2011, the group began counting deaths from the Syrian uprising and conflict, including those caused by IEDs. The numbers of deaths recorded by SOHR have been regularly reported by NGOs and international newspapers in coverage of the conflict.

Abdelrahman says that he receives reports of fatalities from over 200 individual sources within Syria, who he stays in contact with via mobile phone and Skype. According to the New York Times, four men inside Syria help to report and collate the information provided by activists. Incident reports are published on the website, alongside information regarding fatalities.

The data provided by the SOHR is presented in incident reports, and a downloadable database does not exist. This makes it difficult to search for specific information. Since most international media is banned from Syria, it is extremely difficult to verify the information provided by the SOHR. Both SOHR and VDC provide C-IED in the form of data collection. This can be used to analyse the use of IEDs and exemplifies the ability to record IED incidents for intelligence purposes for attack the network C-IED efforts.

Handicap International has provided risk education teams to visit displaced people in camps to provide education on the dangers of ERW. This has particularly targeted children, who are considered especially vulnerable. They have also provided local demining training courses in Kobani, where Handicap International have focused their demining attentions, as the contamination there is one a level rarely seen before. The initial surveys found on average 10 pieces of munitions per square meter, and booby traps placed all over Kobani, including booby-trapped corpses, that have already proved lethal. Handicap International’s efforts in Kobani have been accompanied by further risk education and clearance.

DCA has been provided EOD specialists to tackle the IED contamination in Syria’s Kobani in 2015, with the financial assistance of the Danish government. The EOD specialists have taken part in an advanced refresher course on IEDs to prepare them for Kobani, as the IEDs they will see in Kobani will require highly specialised skills. The IEDs will include booby traps and other notoriously difficult and lethal IEDs. The DCA EOD specialists will have also been briefed in the terrain and the country specific knowledge they will require. The clearance operation should allow civilians to return to their homes safely and recommence their work and lives.

DDG has one office in Damascus, Syria, with one local staff and one expat staff. Since 2013, DDG has conducted an ERW Risk Education (ERWRE) project alongside the Syrian Ministry of Education (MoE). Through risk education the DDG hope to raise awareness and encourage safe behaviour, particularly for children who are made further vulnerable due to their curiosity and lack of experience. To ensure this knowledge reaches children they have begun a train the trainers programme to train school teachers from the most affected areas of the most impacted governorates – Aleppo, Daraa, Raqqa, Hasaka, Homs, Hama, Damascus.

The training is conducted in Damascus. The training aims to provide all identified teachers with a sound basic knowledge of ERWRE techniques, but focuses upon the practical aspects of designing appropriate messages to be delivered to school children. Awareness materials such as notebooks, T-shirts, leaflets and posters are to be distributed to schools with safety messages to increase awareness further and act as training aids.

CAR has also provided significant intelligence that could be used to counter IS in Syria. The report mentioned earlier, “Tracing the Supply of Components Used in Islamic State IEDs”, also examined those used in Syria and provides extensive information on how IS’ IEDs have been made. CAR’s work in Syria has consisted of IED mapping, contamination mapping, some C-IED training, incident reporting of battlefield damage assessment, in-field recovery of IEDs and IED component parts (samples’ collecting), recovery of explosive precursors and some chemical agents, and components’ tracing, as well as technical and biometric exploitation in conjunction with the FBI. The findings can be used by forces on the ground conduct counterterrorism and C-IED activities.