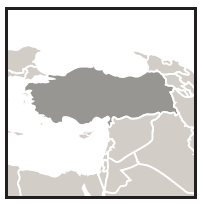 The threat of such attacks stems from many groups including the PKK and similar affiliates or splinter groups, the Revolutionary People’s Liberation Party/Front (DHKP-C), and more recently from IS. The most impacted areas have been those that border Syria and Iraq in the south of the country and the two cultural and political centres, Ankara and Istanbul.

On the other hand, Turkey has been known to support some terrorist groups such as Hamas (even offering military training through Hamas’ political bureau in Istanbul) and has even been found to have provided support to IS on some occasions.

The Turkish National Police Bomb Disposal and Investigations Division was established in 1978 and acts as the headquarters for all bomb disposal units in Turkey. They are responsible for rendering safe IEDs and the investigation service, as well as the training of the bomb technicians and assignment planning. The bomb technicians are dispatched to all reports of a bomb threat and are trained to carry out bomb sweeps of places where such a threat has been received. The technicians will also collect evidence from hazardous devices and conduct post-blast investigations. Evidence can then be presented by the expert witnesses at the courts.

The investigations can aid specialist police units. They also provide police assistance with raids using entry teams with booby-trap detection and avoidance, and with search and destroy bomb making factory operations. The Turkish Bomb Data Center (TBDC) is a part of this Division. The TBDC archives all bombs events and has done so since 1978. The TBDC also provides information to bomb technicians about new threats.

The National Police also operate an outreach programme to affected communities, to reach those that may be vulnerable to terrorist recruitment tactics. This programme includes social projects, as well as training for local officers and teachers. The training helps those that may come into contact with vulnerable people counter extremist messages and to notice signs of terrorist interaction.

The Diyanet, Turkey’s Religious Affairs Office within government, operates a similar programme but through the religious leaders and associations, thus reaching congregations. The Diyanet also released a report explaining why IS’s ideology is un-Islamic.

The Turkish Customs Administration (TCA) enforces border security. Part of their roles is preventing illegal substances and terrorists from passing through the border, particularly explosives and other terrorism-related materials. In the past, issues have been reported such as lack of personnel, adequate equipment, intelligence and basic supplies. However, the TCA have been engaged in many efforts to improve their capabilities. The TCA has focused on efforts to improve their effectiveness, knowing that many customs officials are already stretched and with assistance have improved the ways in which monitoring and operating is carried out.

Though the TCA has been predominantly focused on narcotics, they had trained four dogs in detecting explosives and ammunition as opposed to the complete absence of such dogs before 2000.

Recent steps taken by Turkey have seen them commended for the betterment of their counter-terrorism efforts, such as increased arrest and prosecution of terrorists, increased information sharing arrangements and improved border security. However, they were also criticised for being so internally focused.

In 1996 the US Customs and Border Protection (CBP) and TCA signed a Customs Mutual Assistance Agreement. This has seen them regularly meet to share best practices for border security and trade facilitation. As well as collaboration and cooperation, the CBP has delivered training programs to the TCA on customs and border control.

German and UK Customs administrations have engaged in efforts to support Turkey’s improvement of its customs work, particularly in risk management. Twelve workshops and 38 seminars were organised between 2012 and 2013 for Turkish customs officials. These were attended 727 customs officials, whilst 35 customs officers took the opportunity to participate in study visits or traineeships in Germany and the UK. 16 staff members attended train-the-trainer courses on customs techniques, so that they may pass this knowledge into further customs training in Turkey.

The TCA cooperates with the administrations operating in the member countries of the Southeast European Law Enforcement Center (SELEC) and European Union. The EU’s assistance to Turkey, such as through the Instrument for Pre-Accession Assistance (IPA-II), has seen projects which aim to improve border and customs security and surveillance through modernisation of border surveillance systems and enhanced inter-agency collaboration in line with the EU’s integrated border management policies and strategies. EU projects have allowed the TCA to purchase equipment, such as vehicles for “mobile customs enforcement units” and technical control equipment used by mobile units (drugs and explosive detectors, density measurement devices, videoscopes and laptops), as well as baggage scanning systems.

Turkey formally joined the Combined Joint Task Force-Operation Inherent Resolve (CJTF-OIR) and began operating anti-IS airstrikes in 2015. Turkey had previously followed a policy of noninterventionism towards IS, but after the IS attack on Suruç in July 2015 that killed 33 and wounded 104, their position changed. They have conducted airstrikes into both Iraq and Syria, and allowed US-led coalition forces to use Incirlik air base to conduct operations.

In response to the threat IS pose in both Turkey and Syria, Turkey has further engaged across the border in Syria since the end of August 2016. Turkey’s broadened engagement in Syria came just days after IS used a child proxy ‘suicide bomber’ to carry out an attack on a wedding in Gaziantep, south Turkey. The IED killed at least 54 people, including 29 children, and wounded over 230. Since then, Turkey has supported attempts to push IS out of Jarabulus, one of IS’s last strong-holds near the Turkish border. Turkey have indicated that their assistance in north Syria will not end until it is secured and they will continue to assist efforts to rid Syria and Iraq of IS. Many of Turkey’s efforts in Syria and Iraq have also targeted PKK and YPG forces, groups which Turkey considers terrorists.

Turkey is a founding member if the GCTF, an international forum compiled of 29 countries and the EU.  Through bringing together counterterrorism experts the forum hopes to use the expertise to develop tools and strategies to combat the terrorist threat. Turkey has worked extensively on the GCTF Horn of Africa Working Group to target the specific issues within the region. As well as participating in this forum, Turkey is also a founding member of the International Institute for Justice and the Rule of Law (IIJ), a law-based institution that provides training to law makers and enforcers on how to address terrorism and other transnational crime.

In regard to terrorism financing, Turkey is part of the Financial Action Task Force (FATF), an intergovernmental body that seeks to ensure the effective combatting of money laundering and terrorism financing. At one-point Turkey’s lack of compliance with FATF recommendations risked its membership, but recently Turkey has stepped up its efforts by introducing new measures to comply with FATF standards. In regard to terrorist financing, Turkey strengthened reporting requirements for suspected terrorist financing transactions and adopted a new regime on the Prevention of the Financing of Terrorism. However, the non-profit sector is not audited regularly for counter terrorism financing purposes, nor does the sector receive adequate advice on the matter.

DDG have been providing ERW risk education to Syrian refugees in Turkey since 2013. It is hoped this will not only be useful in Turkey, where the area is unfamiliar to them, but also on their return home. Similar to DDG’s programme in Syria, children are the primary target of this education, but adults are taught as well. Humanitarian organisations operating from Turkey and providing assistance to those affected in Northern Syria are also supplied with MRE.

Although CAR do not operate in Turkey, their research into the IEDs used by IS has led them to some Turkish companies, whose materials have ended up in such IEDs. Turkey’s mining and agricultural sectors, which employ such chemicals and explosives, have been strongly implicated in CAR’s research. In total CAR identified 13 companies involved in IS’ IED supply chain in Turkey. The items produced in Turkey that ended up in IS IEDs include chemical precursors, containers, detonating cord, cables and wires.