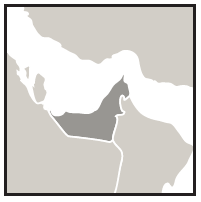 The UAE faces little threat from IEDs. UAE borders countries that face a similar threat level. However, they remain part of a region where use of such weapons is increasing and as this has already impacted neighbouring Saudi Arabia, it poses a threat to the UAE too.

UAE’s C-IED efforts are largely preventative measures aimed to counter radicalisation and extremism. In 2015, UAE broadened their discrimination law to criminalise hate speech and acts that promote religious hatred and intolerance. It banned referring to those who are not of your own religion as infidels. However, the new laws have been criticised for their broadness, under which atheism may be criminalised for example.

Other initiatives have seen guidelines provided to mosques for Friday sermons and training to imams on messages of tolerance and peace. The UAE has also engaged in bilateral initiatives to target the promotion of violent extremism, particularly via the internet.

State security forces are responsible for investigations and responding to terrorist incidents. The weapons and explosives section of the police conduct regular specialised training for UAE police and other regional participants.

The US offered UAE support for their counter terrorism efforts against IS and AQAP in the form of a case for 1,000 GBU-31B/B(V)1 and B(V)3 precision tail kits, and implemented cases for 600 GBU-12 laser-guided kits with associated containers, fuses, and repair parts.

The US and UAE cooperate to combat terrorism financing through the UAE-US Financial Counterterrorism Task Force. The Task Force is a means of enabling further coordination and information sharing between the two countries to destroy the flow of funding to terrorist groups.

UAE has been used by terrorist organisations to facilitate the financing of terrorism. As a member of MENAFATF, UAE has sought to prevent this through greater action to disrupt terrorism financing and have also engaged in similar efforts through the Counter ISIL Finance Group. Their financial intelligence unit is part of the Egmont Group too. In recent years, the UAE has been increasingly successful at investigating suspicious transactions and freezing assets and further training has been provided to the relevant personnel.

The UAE have also conducted more air operations to counter ISIL than any other coalition members except the US.

The UAE has served as the Countering Violent Extremism Working Group for the GCTF and is home to Hedayah, a think-tank to provide communities and governments with the tools and expertise to counter extremism.