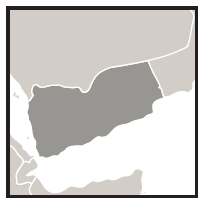 The amount of civilians killed and injured in Yemen each year by IEDs has grown over the last five years, as has the amount of IED attacks and the lethality of each. In previous years, it appears IEDs posed more threat to armed actors, with 533 killed or injured in 2012, the worst year for armed actor casualties from IEDs in Yemen. Since 2012, armed actors impacted by IED attacks have reduced, whilst the civilian impact has risen. In 2011, there were 40 recorded civilian deaths and injuries from IED incidents, in 2015 there were 924 – an increase of 2210%.

However, this year so far has shown a return to previous years, with less civilian victims and more armed actors casualties. In the first six months of 2016, AOAV recorded 405 armed actor deaths and injuries and 110 civilian from 17 IED attacks. The main IED threat currently stems from IS in Yemen and their affiliates, though in the past IED attacks were carried out by a larger number of actors including al-Qaeda in the Arabian Peninsula (AQAP) and their affiliates.

Counter-terrorism activities in Yemen are generally conducted by the Political Security Organisation (PSO) and the National Security Council (NSC). The PSO is one of Yemen’s intelligence agencies and as part of its work conducts terrorism investigations. They do however have a record of abusing their powers and infringing upon the human rights of suspects. The NSC was created to reinforce counter terrorism activities to achieve greater national security.

Anti-terrorism units within local police forces are responsible for monitoring and preventing terrorist related activities. Despite their capabilities being somewhat limited by the escalating violence, they have had some success in thwarting IED incidents. For example, Aden police anti-terrorism unit only recently prevented a bus bombing from occurring as the perpetrator was arrested before the explosives were detonated, avoiding what was likely to have been a high number of civilian casualties. The police bomb disposal experts were then able to diffuse the bomb. Similar terror arrests were also made in Aden in the preceding weeks.

In the past, Yemen had made pioneering efforts to try to reduce the impact and threat of terrorism in the country. For example, in 2002 the Yemeni government established the Committee for Religious Dialogue. It was a programme that aimed to provide rehabilitation to former terrorists whilst they were spending their sentence in prison. It attempted to encourage those who had been arrested for terrorist-related offences to confront their beliefs and re-evaluate their religious basis. The programme was said to have great potential by independent international organisations, but it was discontinued in 2005, as it lacked the necessary support from other areas of government.

In 2010, Yemen Customs ordered two Z Backscatter Vans (ZBV), a non-intrusive mobile inspection system, with an exercisable option for two additional ZBV systems. The ZBV screens cargo and vehicles for explosive threats and materials. It was ordered to aid Yemen’s fight against terrorism at seaports and border checkpoints. Customs officials also use trained police dogs in their work.

It was reported that 80% of smuggled materials seized by Yemeni security forces between 2013 and 2014 were fertilisers and pesticides used to make explosives.

Counterterrorism airstrikes have been conducted by the US in Yemen targeting AQAP terrorists, predominantly through the use of drones. From 2010 the UK was also involved in assisting the US to carry out the strikes as well as mentoring National Security Bureau personnel. The UK’s involvement in the drone strikes was not widely known and has received criticism. The UK would assist in identifying and locating human targets for the American drones, as the Yemeni intelligence services were not as capable of doing so. 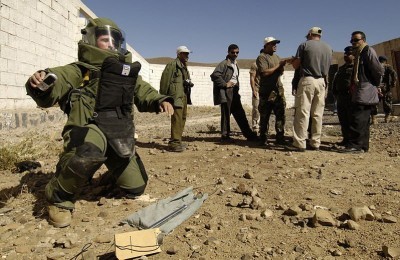 The US offered UAE support for their counter terrorism efforts with IS and AQAP in Yemen in the form of a case for 1,000 GBU-31B/B(V)1 and B(V)3 precision tail kits, and implemented cases for 600 GBU-12 laser-guided kits with associated containers, fuses, and repair parts. The UAE also deployed mine clearance vehicles in 2015 to assist with the clearance of landmines and other UXOs as part of the operations in Aden and Marib. Saudi Arabia is also thought to have carried out demining in Marib.

Groups have called for international assistance to be provided to Yemen to assist with clearance and other demining and C-IED efforts, due to the scale of the problem faced, particularly by civilians.

The UK has provided £1.05 million through the Conflict Stability and Security Fund in 2016 to the UNDP-led efforts to re-build Yemen’s demining and IED clearance capacity. The UK hopes that these efforts will reduce the physical and socio-economic impacts of mines, IED and other ERW, as part of the work to address the urgent humanitarian needs of Yemeni civilians.

The US has taken responsibility for training counter-terrorism officers in Yemen and work closely with intelligence security services on counter-terrorism operations targeting al-Qaeda terrorists and disrupting terrorist activities. However, many of the US personnel in Yemen quickly left in 2015, due to the danger posed by the increasingly dangerous situation in Yemen. This was thought to be a considerable detriment to the Yemen and US governments counter-terrorism efforts in the country. The US approach in Yemen had once been considered by President Obama as a model for his administration’s approach to counter-terrorism.

In 2013, the US Government provided new border security equipment to the Yemen Customs Authority to enhance Yemen’s capabilities in detecting explosives and radiological materials at ports of entry and border posts. The equipment, valued at more than $175,000, was donated as part of the US Government’s Export Control and Border Security’s security assistance program. The programme has also offered training to the Government of Yemen.

In 2013, the United Nations Development Programme (UNDP) provided support to YEMAC’s victim assistance project. The project aimed to provide specialised medical support to those who have been injured by mines and other ERW, as well as facilitate victims’ reintegration into society. The project hoped to support an estimated 200,000 survivors each year in 160 communities. In more recent years it has been necessary for the UNDP to resort to “non-traditional” approaches to the contamination in Yemen, as mine action has been dormant for some years due to the conflict. This has meant surveying had not been able to take place so the UNDP had to use open-source information to identify the most impacted areas. Currently, the UNDP has been providing clearance, risk education, and victim assistance.

Other UN agencies have also been involved in efforts in Yemen regarding landmines and IEDs. For example, the UNHCR has been working with the Mine Action Committee and has since made a request for clearance in areas where refugees may be returning to. They have also called for the risk education for migrants and along key migratory routes.

The National Mine Action Committee (NMAC) in Yemen aims to make Yemen free from the negative humanitarian and economic effects of landmines, and works to ensure mine accidents are eliminated through clearance of mines and other UXO. NMAC is responsible for training miners, even operating its own National Demining Training Center (NDTC). The Regional Technical Executive Unit of NMAC is responsible for overseeing the Yemeni Humanitarian Demining Program. It ensures that they are performing the full range of demining and demining-related activities correctly and efficiently.

The Yemen Executive Mine Action Centre (YEMAC), under the NMAC was set up in 1999. YEMAC acts as the coordination and implementation body that executes a full range of mine action projects. The Government provided approximately 1,000 military personnel as deminers and other operational staff in support of mine action activities nationwide. It is said that this commitment has been, and will continue to be, a key element in establishing and fostering partnership and cooperation with UNDP and donor countries.

However, mining officials have faced key difficulties in tackling mines, IEDs and other UXO. It has been reported that YEMAC sometimes must convince armed groups and civilians to turn in landmines in their possession. Some believe they should be compensated for turning them in, even though the possession of antipersonnel mines is illegal as well as extremely dangerous. This suggests that more risk education is needed for civilian populations to understand the risk of mines, IEDs and other UXOs.

Mining officials have also reported that a lot of their demining equipment, such as vehicles and protective equipment have been looted during the conflict. Since 2014 the mine action centre has not been able to carry out much clearance or surveying work of any kind, due to the conflict as well as a lack of funding. YEMAC now carries out work in provinces not under control of Houthi’s. Work is conducted in Aden, Lahj, Abyan, Hadramout, Al-Dhale, Taiz, Mareb, and Al-Jouf.[i]

All YEMAC’s work is conducted manually. They explained that they face equipment, funding and expertise shortages which limit the humanitarian activities they are able to carry out.[ii]

The DDG and DRC collaborate closely to provide support to refugees and host populations in Yemen, especially in the regions of Abyan, Saada, Harad and Aden. DDG has two offices in Yemen; Sanaa and Adan and it employs 1 local staff and 1 expat staff. It has 9,373,558 DKK (1,080,003 GBP) of contracts written in Yemen.

The DDG has provided C-IED assistance in the form of assistance with weapons and ammunition management. They have also worked in collaboration with YEMAC, and other local partners, to deliver risk education. The risk education has been delivered to both children and adults in the some of the communities most impacted by the presence of landmines and other ERW.

DDG and DRC are also currently implementing a Community Driven Recovery and Safety (CDRS) project, funded by the UK and Norway, in the southern governorates of Abyan and Lahj.

[i] According to YEMAC’s questionnaire response.

[ii] According to YEMAC’s questionnaire response.