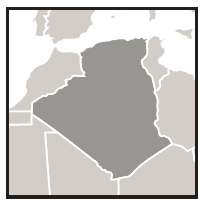 Between 2011 and 2015, Algeria saw 12 IED attacks that caused deaths and injuries. 182 deaths and injuries were recorded from English-language media in this period, though most occurred in 2011. Both civilian and armed actors have been the targets of such attacks. The majority of attacks occurred in the north of the country, in areas that line the coast, close to the capital of Algiers.

The main perpetrators of such acts have been al-Qaeda in the Islamic Maghreb (AQIM), which aims to overthrow the Algerian government and install an Islamic state, and the group’s affiliates such as the Movement for Unity and Jihad in West Africa (MUJWA). Both have carried out other terrorist attacks across the country as well.

Algeria is still trying to free the country of mines that have littered the lands for years. The Algerian Army has destroyed hundreds of thousands of these landmines. As of February 2016, they had destroyed over 800,000. Landmines have also been used by terrorists in the country to protect their hideouts or to cause harm to security personnel or civilians. Algerian counterterrorism forces are involved in detecting and destroying these devices.

The Border Guard Unit is responsible for border security and preservation under the National Gendarmerie (GN). They are tasked with border surveillance, detecting border insecurity, and neutralising border insecurity.  They also control the movement of persons and goods along the border. They are responsible for preventing illegal immigration, smuggling and trafficking. The Border Guard works on the frontlines of preventing terrorism. Not only are they tasked with preventing the entry of suspected terrorists but also preventing the flow of terrorist materials across the border, such as weapons, ammunition, or explosive materials.

Border security is a priority due to the high presence of terrorist groups in neighbouring countries. To increase border security, Algeria have erected more observer posts, surveillance technologies and border management facilities. They have also closed military border areas and increased troop presence, particularly along their borders with Libya, Mali, Mauritania, Morocco and Tunisia. Over 75,000 have recently been deployed to the southern and eastern borders.

The Special Detachment of Intervention is a unit within the GN. They are often the force tasked with tackling terrorist threats. This detachment is an elite unit whose main role is currently to neutralise terrorists and fight terrorism in Algeria, alongside keeping public order.

The People’s National Army (PNA) also plays a significant role in C-IED and counterterrorism in Algeria. They have been responsible for dismantling terrorist groups and destroying their weaponry and materials. On August 30th 2016, PNA detachments found and destroyed four homemade bombs. Only the day before, they found and destroyed nine homemade bombs, as well as ammunition and detonation tools. On the 26th they had destroyed 2 IEDs, and the 23rd, 18 were destroyed during a search operation.

In order to prevent importing violent Islamist extremist ideologues, the Algerian government does not allow anyone to preach in mosques other than those appointed by the government. They also monitor the mosques to avert breaches in this security and prohibit the use of mosques as public meeting places outside of regular prayer hours. They also are responsible for the training and salaries of all imams in the country. This is intended to help to promote a more moderate form of Islam as advocated by the Algerian government, instead of risking extremist preachers manipulating followers. Though, there is also a risk of public demand for ‘authentic’ Islam, not co-opted by the state, which could lead to radicalisation.

As part of these efforts to counter violent extremism, Algeria also wished to target online radicalisation. To do so, the government created the National Preventative Organ for the Fight against Infractions Linked to Information and Communication Technology. The organisation is responsible for monitoring online terrorism and efforts to radicalise and encourage violent extremism on social media. This operation has been running for little over a year, since October 2015.

Other counter-terrorism efforts have seen more internships and job opportunities offered to youth, and positions given to repentant terrorists. Media channels such as radio are also harnessed to counter extremism.

In the last two years, Algeria has procured almost £8 million worth of X-ray generators for military and security use. These are likely to be part of Algeria’s efforts to strengthen its C-IED and counter terrorism efforts at borders and other points of entry. Since the beginning of 2015, they have also purchased £93,082 worth of IED detection equipment for civil purposes, and £446,053 of C-IED and EOD equipment for military purposes.

The United States have combined training efforts in C-IED in Algeria. Algeria has also participated in the Antiterrorism Assistance (ATA) program, particularly in efforts to improve border security, such as screening measures.

Algeria is a member of NATO’s Mediterranean Dialogue Framework, and NATO conducted a counterinsurgency seminar in Algeria through the JFC Naples 2015 Military Partnerships activities. It was attended by more than 40 Algerian officers from the Algerian Armed Forces and the Algerian Gendarmerie. The seminar focused on intelligence lessons and C-IED. The lessons were conveyed through case studies to underline the main lessons, using experiences from Afghanistan.

The United States and Algeria have conducted joint training in the area of C-IED. The US has also assisted with humanitarian mine action operations and UXO disposal in Algeria, through the 52nd Ordnance Group.

China too, has also sought to facilitate counterterrorism cooperation between themselves and Algeria. China and Algeria have engaged in discussions on increasing such bilateral cooperation. This discussion between the two states only began in July 2016, but it marks a significant step, as such as partnership would be the “first of its kind between China and Arab countries”.

Algeria has assisted Tunisia is its counterterrorism efforts, especially its border security, in an effort that will benefit both Tunisia and Algeria. The efforts focus on building border capacity through training on best practices. However, it is increasingly becoming clear that more of a regional effort is needed to adequately protect the borders of these neighbouring countries.

Algeria has also facilitated dialogue between groups and states in an attempt to facilitate peace in the countries through a political solution, such as in Mali and Libya.

Algeria is a member of MENAFATF and has made significant progress in combating terrorism financing – enough for the FATF to recognise them as a country working to improve in such areas and seeking to meet their MENAFATF commitments. Algeria has expanded their ability to seize terrorist funds and investigate suspicious transactions, as well as improved legislation on terrorism financing.

Algeria was a founding member of the GCTF – a forum that brings together counterterrorism experts to develop tools and strategies to combat the terrorist threat. The GCTF also led to the development of the International Institute for Justice and the Rule of Law (IIJ), of which Algeria is a board member. This organisation seeks specifically to train and advise law-makers how to address terrorism and other transnational crime. The IIJ focuses on countries seeking to improve their judicial response to terrorism.

Despite not wanting to join the Global Coalition to Counter ISIL, Algeria has provided intelligence in the counter-ISIL efforts, as well as imam training and capacity building with neighbouring states.

Handicap International is deeply involved in efforts to improve the lives of those with disabilities in Algeria. As part of its multi-faceted work in the country, Handicap International’s work has included Mine Victim Assistance – improving the quality and sustainability of national landmines victim assistance services. This work had a focus on rehabilitation services and these efforts across the country will also support victims of IED violence. Their work will also have improved the lives for IED survivors in many areas, such as social inclusion, rights and reintegration.

GICHD partnered with Algeria, as part of their Arabic-language Outreach Programme for mine action, to conduct their third annual conference on “Management of Residual Contamination” in 2014. The conference focused on developing national capacities and addressing residual contamination. At the conference the Algerian authorities on mine action provided lectures and updates on their efforts with dealing with landmines and ERW.