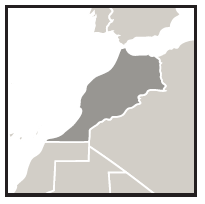 Morocco has managed in recent years to remain mostly immune from IED attacks. The only terrorist attack that occurred in Morocco since the Casablanca attack of 2003 was the 28 April 2011 attack in Marrakech that killed 17 people and injured 23. The blast, from an IED left in a bag, destroyed the Argana cafe in Jemaa El-Fnaa Square, a popular tourist spot. According to the Moroccan Ministry of Interior, it was packed with nails and was set off remotely, most probably by a cellphone. A Moroccan security official also added that the bomb contained ammonium nitrate and triacetone triperoxide, or TATP, an explosive easily made and popular among IED makers in the Middle East.

Although Morocco has not had many IED attacks or terrorism in general compared to its neighbouring countries, they are at risk as they are surrounded by countries experiencing such hostilities and as it is a popular destination for Western tourists.

Between 2002 and March 2015, Moroccan security services reportedly dismantled over 130 terrorist networks, leading to the arrested of almost 3,000 people.

Due to the terrorist threat faced in Morocco internally and from neighbouring states, Morocco created the Central Bureau of Judicial Investigations (BCIJ) in 2015. The BCIJ’s responsibilities include investigating and countering terrorism, state security violations, smuggling of explosives and other similar areas. Their counterterrorism operations, including C-IED, are conducted in coordination with the General Direction of National Security (DGNS) alongside the DGST.

The BCIJ saw many successes in 2015, such as arrests and the destruction of terrorist networks, many of which were affiliated with IS. Some of the networks were recruiting fighters to send to Iraq and Syria. Others included explosives experts, ammunition, weapons and explosives, and plans to carry out attacks in Morocco. In July 2016, Morocco announced the arrest of 52 suspected militants said to be inspired by IS. They announced the seizure of weapons and explosive materials. As part of the same announcement, Morocco were said to have dismantled 38 suspected militant cells with IS ties since 2013.

Morocco’s Ministry of the Interior has also launched an anti-terror strategy called Operation Hadar. This counterterrorism strategy sees security forces such as Morocco’s Royal Armed Forces, the Royal Gendarmeria, police and auxiliary forces, engage in activities targeted at preventing Moroccan extremists trained abroad – numbering at least 1,500 – from re-entering the state and carrying out attacks such as those with IEDs. Hadar focuses on patrolling key sites and cities to protect civilians and foreign visitors, who it is believed would be a likely target in an attack. After Hadar saw forces deployed to the most high-risk areas, further forces were tasked with tightening controls at airports, train stations, and other transportation sites to monitor suspicious activities and persons, as well as with patrolling borders.

One key in Morocco’s counterterrorism strategies are the Muqaddamin, or municipal sheriffs. The Muqaddamin are essential to the work of Morocco’s Ministry of Interior and have been in place for decades. Now they are often used by the Interior Ministry to find and provide intelligence for counterterrorism operations. The Muqaddamin rely on a dense network of informants who provide detailed information about suspicious activities and persons. These networks are said to stretch across the entire country and reach into every neighbourhood.

The border security in Morocco has been commended for its efforts. It cooperates bilaterally with information sharing and intelligence to better monitor who is attempting to enter and exit the country. The border authorities are said to be very capable in detecting fraudulent documents, but are let down by their lack of biometric screening measures.

As part of efforts to counter violent extremism, police had been ordered by the King Mohammed VI to counter those encouraging what is known as “Tcharmil”. This practice engages young people in gang culture and behavior, prompting them to pose with weapons and carry out robberies. Teenagers would post on Facebook photos with knives, tampered scooters and jewelry or money earned in robberies. The government believed this behaviour could lead to greater extremism and violence.

Morocco’s C-IED policy is embedded in its counter-terrorist strategy and consists of various preventative measures such as promoting a moderate form of Islam. For instance, the Mohammed VI Institute for the Training of Imams, Morchidines, and Morchidates in Rabat, sees Imams and preachers from France, Morocco and across the world trained in teaching moderate Islam. Initially opened in March 2015, the centre now sees not only African national imams but is also home to a joint exertion by France and Morocco to promote religious moderation and tolerance to counter violent extremism in France too. Other countries including Mali, Guinea Conakry, Nigeria, Libya and Tunisia have received or requested instruction for their imams.

A new foundation, Mohammed VI Foundation for African Ulema, will be another key part of this continuing work and Morocco’s leadership in countering violent extremism. There are hopes that this institutions will act as a place for cooperation and information sharing for Ulema.

Counter-extremism in Morocco also sees the government monitor mosques across the kingdom in a way that leaves no room for radical groups to exploit the places of worship to spread their propaganda. Every mosque falls under the control of the Ministry of Islamic Affairs, which has the exclusive prerogative to appoint imams and the staff who run them.

Though Morocco is involved in many counterterrorism efforts at home and abroad, the country has also been reported to have colluded with groups carrying out terrorism, such as AQIM in Algeria.  Meetings were reported to have taken place between Moroccan intelligence and AQIM leadership. It is suggested that the Moroccan intelligence services sought to revive AQIM terrorist activity on Algerian soil and would commit resources to this effort.

In October 2015 bomb disposal teams from the UK were sent to Morocco due to fears that terrorists were planning to target British tourists in the country as they had recently done in Tunisia. The British troops helped train the Moroccan armed forces in bomb disposal and coping with mass casualty incidents. The soldiers were also taught to deal with any hi-tech bombs planted by militants. The British and Moroccan intelligence services had uncovered in 2015 several terror plots by members of Islamic State and al-Qaida. Defence sources had revealed there was a “high threat” of a terrorist attack (possibly using IEDs) against holidaymakers.

Morocco works closely with the US in many aspects of counterterrorism. They share information and intelligence about border security that allows terrorists to be stopped at the borders and other entry points. Morocco participates in the US ATA programme which provides training for those investigating terrorist incidents, including post-blast investigation techniques, cyber forensics, crime scene forensics, critical incident management, and executive leadership. Government officials also participated in FBI-led courses on intelligence and management.

Algeria and Morocco’s continued disagreement over the Western Sahara has remained an impediment to both bilateral and regional counterterrorism cooperation.

Morocco is part of the Trans-Sahara Counterterrorism Partnership (TSCTP), an initiative set up by the US in 2005 to build regional counterterrorism capacity and aid cooperation between regional neighbours. Some of the specific aims include strengthening borders and border cooperation, and information sharing between states. This could enable greater monitoring of materials and persons across borders and aid investigations

Morocco is also a member of MENAFATF, a regional FATF-style body. Morocco continued to make progress in countering the financing of terrorism. In 2014, the Unit de Traitement du Renseignement Financier (UTRF) investigated four transaction reports that they suspected were linked to the financing of terrorism. The UTRF also participates in information sharing with other financial intelligence units in the region to better investigate such transactions. Such investigation led to the arrest of two Turkish national and a Moroccan who were involved in an operation to raise funds for IS in 2015.

As a founding member of the GCTF, Morocco participated in programs to improve technical investigative training for police and prosecutors. In 2016, Morocco served as co-chair of the GCTF, continuing its leadership role within the organisation. In 2015, Morocco had co-chaired the GCTF’s Foreign Terrorist Fighters Working Group, and together with the US Morocco led the GCTF’s Border Security Initiative.

Morocco is a member of the Global Coalition to Counter ISIL. The government’s efforts have been vigilant to countering IS propaganda and preventing recruitment of terrorists. The country has also contributed air forces to the campaign in Syria and Iraq.

G4S signed a £10 million three-year contract in 2013 with Tangier Med Port Authority and Tangier Med Special Agency to provide specialised security services at the site in Morocco. G4S had 300 employees based in the country, responsible for security at the facility, particularly focused on operational and technical security, such as passenger and freight screening.