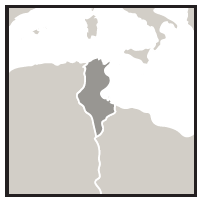 Tunisia has faced further terrorist threats and IED attacks, some of which have been thwarted by the authorities. Tunisia’s location, with its border with Libya makes it further vulnerable to such acts.

The Army is the only body authorized to take any concrete actions related to landmines, UXO, or IEDs in Tunisia.

The presence of landmines along the Algerian borders has been reported during recent operations; in 2014 in Sakiet Sidi Youssef (governorate of Kef), several soldiers were injured by landmines in two separate incidents while military forces were conducting a combing operation to track down terrorists holed up in the region. In the first incident two servicemen were slightly wounded. In the second one, another landmine went off as a military vehicle passed by but no casualties were reported from the blast.

The Tunisian Security Forces have an EOD School, which has been transformed with the assistance of the UK into a specialist centre. It currently offers 14 different courses for EOD and C-IED.

In February 2016, Tunisia announced that it had completed the first part of its 125 mile-long barrier along its border with Libya. The barrier is part of Tunisia’s efforts to improve its border security, particularly the border with Libya, due the terrorist threat that emanates from the country. The second phase will see the instalment of electronic equipment with the help of the US and Germany. It is thought that the border, in its current state, has led to a reduction in smuggling, as it makes the border impassable for vehicles.

Most C-IED activities are focused on prevention and fall under the umbrella of the Tunisian counterterrorism strategy. On July 24 2015, Tunisia introduced a new counterterrorism law. The new law seeks to make the procedures used to fight terrorism and money laundering more efficient. The Tunisian government hopes that the law’s proposed national commission to fight terrorism—a permanent joint commission uniting members of different ministries, the judiciary, and eventually members of civil society organisations—will allow for better cooperation between these different entities.

The new bill also creates a unit of judges specialized in terrorism cases (Article 38) and hands investigations to the criminal investigation department of Tunis rather than units at the governorate level (Article 36). This aims to make procedures more straightforward and avoid information being lost between different police units. The bill would also make it easier for investigators to use phone-tapping against suspects and make public expressions of support for terrorism an indictable offence.

In terms of border control, the Tunisian government has restricted travel to Turkey, Morocco, Algeria, or Libya for citizens under age 35.

The US has provided training as requested by the Tunisian forces, particularly Tunisia’s 61st Engineer Brigade. The training includes detect, defeat and destroy techniques for IEDs. Other training has looked at post-blast investigations – carrying out safe controlled detonations, securing an uncontrolled blast scene, documenting the scene and collecting evidence.

In 2016, the US agreed to fund a project to install an electronic surveillance system on Tunisia’s border with Libya, as mentioned earlier. The project is anticipated to cost $24.9 million and will be undertaken by BTP and AECOM. The project will also see Tunisian forces trained in how to use the system. Further border security funds and assistance have been provided by Germany and Italy.

The UK has a small team of C-IED and training specialists deployed in Tunisia that have been present in the country since March 2015 and will continue to be stationed there until at least June 2017. They have improved training at Tunisia’s EOD School – transforming it into a specialist centre that can offer 14 different courses. Specialist courses are being provided to targeted areas of Tunisia’s forces. It is hoped by the UK that their continued assistance in Tunisia will allow the Tunisian forces to reach international standards and achieve self-sufficiency in training by next year.

Tunisia and Algeria are seeking to enhance their cooperation to address terrorism and increase security for both countries. In particular, joint border security efforts as well as increased intelligence and information sharing seem to be advocated by both states. Algeria and Tunisia have also cooperated in counterterrorism investigations. In March 2015, Tunisia and Algeria worked together to find the perpetrators of the attack on the Bardo museum, whom they also believed ware responsible for other attacks carried in Algeria.

Tunisia is a member of MENAFATF. The main threat to Tunisia through terrorism financing has been charitable associations financed abroad, according to their 2016 “Mutual Evaluation Report”. The MENAFATF recommended that Tunisia address the growth of terrorist activities within its borders, and expressed concern that despite terrorism financing taking place no one had yet been convicted. Tunisia also lacks the analysts to fully investigate suspicious transactions in a timely fashion.

Tunisia joined the Global Coalition to Counter ISIL in September 2015. It agreed to serve as a pilot country for the International Counterterrorism and Countering Violent Extremism Capacity-Building Mechanism (ICCM). Tunisia is seen as a critical counter terrorism partner in the North Africa and its efforts have been welcomed in the Coalition.

Tunisia is a member of the Arab League and the GCTF. As part of the GCTF-inspired International Institute for Justice and the Rule of Law (IIJ), Tunisia participated in workshops for addressing terrorist-related crimes.

The DDG has two offices in Tunisia, one in Tunis and one in Zarzis, Medenine and employs 9 local staff and one expat staff. Its activities in Tunisia include improving dialogue and cooperation between security providers, community safety, and SALW (Small Arms and Light Weapons) marking and registration. It does not perform any demining or C-IED activities in Tunisia.

DDG initially began setting up a border security and management project in July 2014 in the city of Ben Guerdane in Tunisia (located on the border with Libya), in order to focus more on border communities and to address the trans-national character of armed violence and crime in the Sahel-Sahara Region. Ben Guerdane had been put under increasing stress as a result of the large flow of people across the border in July and the threat that the conflict in Libya could spread to the communities near the Tunisian border. The organisation aimed to improve communication channels between the local community, civil society, and security providers through a participatory community-based approach involving all parties in dialogue. In the latter part of 2015, DDG continued its activities in Ben Guerdane and expanded into Dehiba in order to focus on community police dialogue, community safety and conflict management education.

Handicap International launched its operations in Tunisia in 1992 and currently employs 14 national staff. The organisation’s goal in Tunisia is to promote the social inclusion of the most vulnerable people and to improve their living conditions by advancing their rights and ensuring their needs are taken into account. Its activities include: Inclusive Education, Social and economic inclusion and Disability rights. It is not involved in any mine clearance projects, education or awareness campaigns or training of personnel in any C-IED activities.