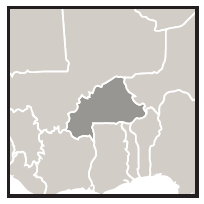 Although Burkina Faso has seen increasing terrorist attacks, the country still faces very little threat from IEDs compared to other nations in the Sahel, despite a terrorist attack in November 2015 that involved IED use. However, instability in Burkina Faso’s neighbouring countries increases the risk of such devices being used in Burkina Faso, particularly as they has been a trend of groups based in the Sahara, such as AQIM, carrying out attacks in urban environments. For Burkina Faso, this became painfully evident in January 2016, when mass shootings perpetrated by AQIM killed 30 people at the Splendid Hotel and Cappuccino restaurant in the central Ouagadogou.

As Burkina Faso is not currently impacted by IEDs, their efforts mostly focus on counterterrorism and initiatives that would prevent IED attacks in the future, given the threat from bordering states, such as Mali and Niger.

The police and the gendarmerie hold primary responsibility for counterterrorism activities, including border security and investigations. Border security appears to have been their highest priority in recent years. The border security is conducted using the PISCES screening equipment. They have also focused on building new border stations, as the greatest security threat stems from outside their borders, particularly to the North. With additional funding, Burkina Faso aims to continue to set up security units along the border.

More efforts on countering violent extremism in the country have been recommended, though some work is reported to have been conducted by Denmark in this regard.

US training, as requested by Burkina Faso, has concentrated on border security and investigations.

French forces are also stationed in Burkina Faso as part of Operation Barkhane, aimed at quelling the rise of terror groups in the Sahel. This allows the forces to respond to terrorist attacks and assist regional forces in their counterterrorism efforts. France and Canada are together also provided funding of €300,000 in 2016 to assist Burkina Faso’s counterterrorism capacity.

AFRICOM proposed to assist in building the capacity of Burkina Faso’s Gendarmarie Border Security and Counterterrorism Company in 2015.

Though a member of the Inter-Governmental Action Group Against Money Laundering in West Africa (GIABA), Burkina Faso’s progress in countering terrorism financing has been slow due to political instability, a cash-based economy, and a slow investigation and prosecution process. However, over the last few years more and more training has been given to relevant personnel in the country as it seeks to progress in combating terrorism financing.

As a member of the GCTF, Burkina Faso has welcomed the training opportunities provided to their country security forces. Country representatives are also frequent participants in the GCTF Sahel Working Group.