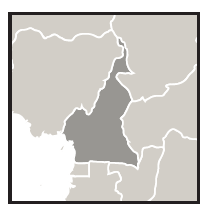 The threat of IEDs in Cameroon has only emerged recently. The country experienced its first IED attack in July 2015. Throughout 2015, Cameroon saw 10 IED attacks that killed or injured, causing the deaths and injuries of at least 487 – which 95% (464) were civilians. All attacks were suicide bombings, and were carried out by 22 suicide bombers in total. Of these, 18 were women, of which at least 11 are thought to have been under 18. All attacks occurred in the Far North region close to the border of Nigeria, Niger and Chad, around Lake Chad. This region has been plagued by the violence of Boko Haram, who is thought to be responsible for all of the bombings in Cameroon. In the first half of 2016 there had already been six IED attacks – all suicide bombings in the Far North region – causing 298 civilian deaths and injuries.

Much of the C-IED work conducted by the Cameroon military involves manning checkpoints in order to prevent IEDs or IED materials crossing borders. Though this can stop IEDs from passing across the border, preventing IEDs from being detonated in densely populated areas and therefore lessening civilian harm, it also means most of Boko Haram’s IEDs are detonated at checkpoints.

The Cameroonian military have recently created a Rapid Intervention Battalion (BIR), who specialise in C-IED and EOD operations. The BIR typically conduct work in the Far North region to respond to the IED threat posed by Boko Haram.

Border security has been increased throughout Cameroon by using more checkpoints and patrols. Screening efforts at other points of entry have also improved, however the security continued to operate with a limited capacity, due to lack of resources. This means some borders remain insecure, though the Far North region is currently the priority. Both the police and military have made significant arrests and disrupted terrorist activities. With greater resources, more could be done.

It has been reported that Cameroon has begun using volunteer ‘vigilantes’ at checkpoints and within communities. They are known as “vigilance committees”. This has seen the use of local groups of volunteers harnessed to support C-IED efforts and it is believed that it has greatly helped. This is because most soldiers will be ignorant of the local customs and dialects given the variety of tribes located in Cameroon. A vigilante on the other hand does, and can therefore spot something out of the ordinary more easily. They also have better ties and avenues of communication in the local community, so it often anything out of place will be reported to them first.

With the assistance of the US, Cameroon has increased border security through a new surveillance setup. This allows movement at border crossings and airports to be better monitored and allows officials to sees scanned images from baggage and parcel screening. Identification systems are also a part of the new system – though this can pose a problem as not all Cameroonians have this kind of identification. The US provided equipment to detect explosives, something that Cameroon are very grateful for due to the growing concern.

The military recently acquired South African-made Ratel armoured vehicles. Deliveries of the vehicles began in December 2015. They were bought to be used by the BIR in C-IED operations. They can be armed with guns and can be fitted with a mine-roller and detection devices. The delivery of these vehicles has also seen a new group of soldiers trained to use the new vehicles and equipment by the BIR personnel, who received training by the South African provider of the vehicles.

Nigeria has been cooperating with Cameroon on border security and together they developed the Nigeria/Cameroon Trans-border Security Committee in order to tackle the threat of Boko Haram that impacts their adjoining borders. In order to tackle the violence along the border together, joint military training on border security has been proposed and information and data sharing. Since this cooperation was developed, significant trade routes have been able to reopen. This is also likely due to the success of other regional efforts to tackle Boko Haram, such as the Multinational Joint Task Force (MNJTF).

As the United States were also concerned about Boko Haram they have provided training – as they have also done with Nigeria forces – to personnel from the Cameroon military, using lessons learnt from Iraq and Afghanistan. This training was given to the newly created BIR, in the summer of 2015. As the BIR mostly operate in the Far North Province where Cameroon is most susceptible to attacks, they have received training in detecting and destroying IEDs to avoid civilian casualties. The training saw assistance from over 300 US soldiers, who are assisting with intelligence as well in the fight against Boko Haram. The training does have its limitations, as the US forces do not go out on operations and are primarily based in schools. This means the trainers must rely on pictures and second-hand accounts to understand the IED threat they are facing and judge how best to respond. The training uses low-cost equipment but despite limitations, is thought to be having a significant impact.

Alongside training efforts, the US also supplied 18 Toyota pickup trucks, a front-end loader and other equipment to Cameroon’s military in December 2015, and six armoured personnel carriers in October 2015. In September 2016 the US DoD awarded Cessna “a $24million contract for six 208B GRAND CARAVAN EX aircrafts, plus three spare Pratt & Whitney PT-6A-140 engines and associated spares and ground handling equipment to US Africa Command and Pacific Command Areas of Responsibility, to support counterterrorism capabilities in Cameroon, Chad and the Philippines.”

Between September 19th to 30th 2016 the French military detachment in Gabon gave mine training to Cameroonian armed forces. This training aimed to assist the soldiers in developing specialised techniques to clear mines and defuse IEDs. 15 policemen and 15 gendarmes who were likely to be deployed to the Far North region received a week of training on fighting terrorism as part of the training organised by the French Embassy in Cameroon.

France is engaged in intelligence-gathering, which has seen two military personnel detached to Maroua, as well as in C-IED training – in 2015 almost 120 deminers were trained.

Cameroon is a member of GABAC, a regional FATF-style body since October 2015. This engagement aims to improve Cameroon’s anti-money laundering and counter terrorism-financing measures. Suspicious transactions are monitored and investigated by the National Financial Investigation Agency. GABAC found that there were several NGOs in Cameroon being financed by fundamentalist groups. Many workers from the NGOs have now been arrested as workers were suspected of funding Boko Haram.

Cameroon is one of the five states that make up the regional military initiative, the MNJTF. The MNJTF has seen Nigeria, Niger, Benin, Chad and Cameroon unify their efforts, to create a 9,000 strong force, with the specific aim of bringing an end to the Boko Haram insurgency. Although the MNJTF is relatively new – only established in 2015 – they have already seen many successes, including the destruction of terrorist camps, the arrest or naturalisation of hundreds of Boko Haram terrorists, as well as the destruction of their IED making factories, IEDs, other weapons and equipment. In fact, the MNJTF has is thought to have recaptured at least 80% of territory that had once been under Boko Haram’s control.

The successes of the MNJTF come despite the lack of funding these nations and the task force as a whole has received, and the comparative lack of C-IED expertise within the MNJTF. It is worth noting that MNJTF has received some training, equipment and funding from other nations and from the African Union Commission, funds amounting to $250 million as of February 2016. The US also pledged to support the MNJTF countries through the provision of $71 million worth of equipment, logistics support and training. However, the funds amounted to only a third of what was needed and dispersal has been slow. With greater international cooperation allowing the provision of more equipment, expertise and training it is easy to envision further success for the MNJTF.

The Council of Imams and Religious Dignitaries of Cameroon (CIDIMUC) has been involved in raising awareness on the dangers of radicalisation and have engaged in efforts to prevent extremism through promoting tolerance and peace. Materials have been distributed, and conferences and prayer sessions have focused on respect for religious freedom.

Muslim clerics, traditional rulers and dignitaries from the Far North have received training in early 2015 in communication technologies the internet as part of information sharing between them and the military, within counter terrorism strategies. However, some of the participants were not able to read and write so it was a struggle for them to engage. They do all have access to the internet and could take the equipment back with them to use for collecting data and recording information about any suspicious activity or persons suspected to have been recruited by Boko Haram.