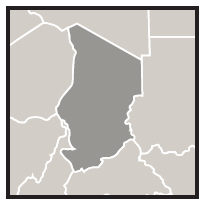 Chad experienced its first suicide bombing in June 2015. Throughout the rest of 2015, Chad faced a perpetual threat of IED attacks, carried out by Boko Haram. 488 people were killed and injured in the seven IED attacks in Chad last year. Of those killed and injured 94% (459) were civilians. The areas targeted were generally populated areas, such as villages and markets.

What is significant is that all the IED attacks were carried out by suicide bombers, and at least half of the bombers were women and children. The bombings took place in the Lac Region or N’Djamena. Where the perpetrator of the bombing has been identified, Boko Haram, an IS-affiliated group, has been responsible for all of them. Boko Haram spread across into Chad to carry out attacks from north-eastern Nigeria. Other states impacted by Boko Haram IED attacks include Niger and Cameroon.

Due to the drastic increase in violence caused by IEDs and other terrorism activities by Boko Haram, Chad declared a state of emergency in November 2015 in the Lake Chad region. Activities carried out by Chad and other impacted states have seen Boko Haram driven out of most of its previously held territory. In 2016, there has only been one attack recorded so far, when Boko Haram planted an IED which killed four soldiers and wounded dozens, in late August. The threat posed by Boko Haram is certainly less than it was this time last year in Chad, but countering Boko Haram has successfully been made a priority and increased safety has been the payoff.

The Chadian National Police perform counterterrorism functions from investigations to searches of suspicious persons. Recently, the police have made efforts to improve their counterterrorism and C-IED capabilities. This has included greater information sharing between various units across the country, and particularly the most impacted areas. They have also increased their border security capabilities. Counterterrorism and C-IED measures have included searching vehicles at the border, as well as persons. They have continued to use various screening measures to monitor borders, such as PISCES biometric screening and biographic screening. The Chadian National Police has however requested more assistance with training, particularly in the areas on investigations, crisis response and border security.

The Centre National de Déminage (CND) is responsible for the demining efforts across Chad. They coordinate all demining activities and cooperate with NGO and private companies assisting Chad in its demining efforts. At the UN Meeting of National Mine Action Directors and the United Nations Advisors (NDM-UN) in Geneva on February 16th 2016, the CND reported that they have found that terrorists in the Lake Chad region are using the ERW to manufacture their IEDs which are then being used in the region and across the borders to harm civilians. As of December 30th 2015, the CND reported to the UN that the situation in Chad had seen over 35,000 displaced by the violence. They have proposed further action to tackle the Lake Chad region and clear ERW. However, it is now relatively dangerous to engage in this type of work in the region. The CND has already begun work on clearing the area though in attempts to prevent further reuse of such materials.

At the meeting, Mr. Mahamat Hissein Salkato, the Deputy Coordinator of the CND, proposed that further steps were required including a technical and non-technical survey, IED management training, risk education and awareness raising, as well as victim assistance.

The Deutsche Gesellschaft für Internationale Zusammenarbeit (GIZ), a company owned by the German Federal Government, has operated on the behalf of the German Federal Foreign Office in Chad, providing assistance to the police, particularly in the area of border management. This training was provided between 2013 and 2015. The police were provided with training in border management, alongside other counter-terrorism measures, such as the detection of forged documents. Training was provided to mechanics and a vehicle workshop was constructed to improve the mobility of the police.

GIZ also assisted through the construction of a new border post in N’Djamena. This is hoped to further modernise border management and improve border management capacity. Forensic equipment and training has been provided by GIZ to aid criminal and terrorism investigations.

The US has partnered with Chad and other forces in the region combating Boko Haram, by providing advisors, intelligence, training, logistical support and equipment. Chad continues to be engaged in the US Antiterrorism Assistance program. The ATA manages the Special Program for Embassy, Augmentation and Response – a programme that provides the training and equipment necessary to respond to a terrorist incident against US facilities in the country.

Operation Barkhane has seen a French force of 3,000 stationed in Chad’s capital N’Djamena.. The French provide support to the forces and assist in capacity building efforts to help tackle terrorism and terrorist-related activities.

Chad has been providing its own bilateral assistance to Niger to fight Boko Haram along Niger’s border with Nigeria. This assistance is provided alongside other regional efforts. Similar efforts have been provided by Chad in Nigeria as part of a bilateral arrangement. The counterterrorism engagement in Nigeria has seen Chad participate in air and ground assaults in Nigeria to tackle the insurgents there.

Chad is one of the five states that make up the regional military initiative, the MNJTF. The MNJTF has seen Nigeria, Niger, Benin, Chad and Cameroon unify their efforts, to create a 9,000 strong force, with the specific aim of bringing an end to the Boko Haram insurgency. Its headquarters are located in the Chadian capital, N’Djamena. Chad has been said to be shouldering most of the costs associated with the regional efforts of countering Boko Haram, but is growing more reluctant as the fight continues. Chad, the country in the MNJTF with the strongest and most capable military has increased its efforts when needed but due to lack of integration within the MNJTF returns to Chad when an imminent threat has been dealt with in a border country. Chad has struggled financially to provide the force asked of them by its regional partners, particularly Niger.

As stated earlier, the MNJTF has seen much success despite the limitations – the MNJTF is thought to have recaptured at least 80% of territory that had once been under Boko Haram’s control. With greater international cooperation allowing the provision of more equipment, expertise, and training, it is easy to envision further success for the MNJTF.

Chad is a member of the TSCTP, an initiative which has seen Chad concentrate on counter-radicalisation, through projects aimed at empowering youths and communities. Such efforts have involved two new community radio stations and two training centres to help develop skills and enhance employment opportunities.

Other regional C-IED efforts that Chad is involved in include the GCTF’s Sahel Region Capacity Building Working Group. The effort seeks to strengthen border security and law enforcement cooperation, as well as build on community engagement projects and improve legal systems and countering terrorism financing. To improve in these areas and support regional endeavours, Chad attends the working group meetings.

In regard to the financing of terrorism, Chad is a member of GABAC. GABAC last assessed Chad in 2014, where they found a number of strategic deficiencies. In general, Chad is impacted by poverty and corruption which sees bribery occur at the border with imports and exports.

Chad is a member of the Egmont Group, an informal international network of financial intelligence units (FIUs), with the aim of providing a forum for FIUs around the world to improve cooperation in the fight against money laundering and the financing of terrorism.

In December 2015, Saudi Arabia announced an Islamic military alliance to counter IS, of which Chad is one of the participating countries. Other international efforts related to C-IED that Chad is a part of include the Organisation of Islamic Cooperation, an organisation that consistently condemns the use of suicide bombings and other forms of IED attacks and has specifically announced that it is against terrorism in all its forms and manifestations. The OIC encourages cooperation and dialogue between states to counter the root causes of terrorism and its related activities.

MAG has been involved in demining in Chad since 2004, and remained deeply involved last year whilst the situation in Chad worsened. This demining prevents other insurgents reusing the mines as they are or as parts of an IED. 824 anti-vehicle mines were destroyed in Chad last year alone. MAG has assisted Chad in improving arms and ammunition management. One of the specific aims of this work is to stop non-state actors from being able to gain possession of these materials for their own use. This work has included technical risk assessment, specialist training to the relevant personnel, as well as refurbishment of armouries and munitions depots.

The risk education MAG has given to communities vulnerable to encountering mines and other UXO has delivered life-saving education, which has been particularly focused on children and displaced people. MAG’s activities, however, are focused in the northern areas that were most impacted in previous conflict by mines and UXO, though perhaps these lessons may be easily transferred to the areas currently impacted in the west.

Handicap International has been working on land clearance operations in Chad since October 2014 and will not be leaving Chad until 2018 at the earliest. They are part of a project committed to clearing contaminated areas in Chad – work that is funded by the EU. This work has seen Handicap International train national deminers, and staff at Chad’s physical rehabilitation centres. They have provided further support to disabled people in Chad to help them integrate back into Chadian society. This has not only involved supporting the efforts of rehabilitation centres but also campaigning to secure rights in Chad for disabled people who face discrimination. The work sees them partner with both national organisations and international NGOs such as MAG.

Dynasafe held a permanent presence in Chad from 2007 to 2011. In 2007, it was awarded a contract to provide international advisors to help build and then develop a local Chadian capacity to safely search for and clear UXO to international standards. From 2008 to 2011, it provided route survey, clearance and MRE in the south east of Chad. As part of this project, it also conducted BAC for the World Concern Development Organisation, clearing 497,301m2 of land.

It set up three local support offices in Abeche, Iriba and Goz Beida to support its operations. They trained hundreds of local national personnel and established a network of experienced local deminers, Team Leaders, medics and support staff, including mechanical personnel, cooks, cleaners and drivers.