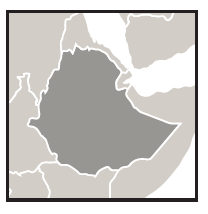 Though Ethiopia has only experienced one IED attack in the last five years, there is still a risk due to the country’s geographic location. Ethiopia borders states that are highly impacted by IEDs, including Kenya and Somalia. This means they must be vigilant in preventing the spread of such attacks and ideologies that lead to such incidents.

Ethiopia’s counterterrorism efforts have tended to focus on the political rather than military components. Their strategy has seen them focus on liberating communities and encouraging solidarity. The military instead respond to civilian and political leadership. Communities are consulted and even given arms so they may fight too. This sees local communities connected to counterinsurgency efforts and given a voice in their area. This technique does however pose the risk of weapons falling into the wrong hands.

The Ethiopia National Defence Force is currently occupied in stemming the threat posed by al-Shabaab in Somalia, to prevent the spread of violence crossing into Ethiopia’s own borders. They have received capacity building training from the US and cooperated in regional security efforts.

NISS have worked to improve border security, particularly along Ethiopia’s borders with Eritrea, Kenya, Somalia, and South Sudan. They also implemented the “PISCES” border management tool to improve their watch-listing capabilities across the country and to constrain terrorist mobility.

The police respond to reported incidents, carry out investigations and bomb disposal work. However, the police have been accused of stigmatising the Muslim community in Ethiopia and having Ethiopia’s anti-terrorist laws arbitrarily used against them for actions such as peaceful protest. The police have even been accused of planting bombs and detaining local Muslims.

The Ethiopian government has also been implementing programs to counter violent extremism. This includes the Growth and Transformation Plan II (GTPII). GTPII addresses the underlying socio-economic factors that make young people vulnerable to radicalisation and terrorist recruitment. Again, this programme seeks to respond to community-based needs and give a voice to youth, and local and national concerns. The effort focused on education, health, employment, and most importantly, sustainability in these areas.

Ethiopia still faces a significant landmine and ERW problem. There are 314 areas that are suspected to be contaminated. The Ethiopian Mine Action Office is responsible for not only locating and destroying landmines and UXOs but also for developing a sustainable mine action capacity and alleviating the human suffering caused by landmines and UXOs.

As well as supporting AMISOM’s efforts in Somalia against the threat of al-Shabaab and other counterterrorism efforts, Ethiopia has also provided direct support to the Somali National Army in similar efforts.

The Ethiopian International Peacekeeping Training Centre (EIPKTC/FDRE-PSTC), located in Ethiopia’s capital Addis Ababa, was established by the Ethiopian Ministry of Defense in 2010. It aimed to help contribute to regional security and stability.

The centre runs training courses that are designed for military members, police and civilians who are potentially being deployed to UN Peacekeeping Operations and AU, EASF Peace Support Operations and other multinational efforts. The course participants enhance their knowledge, and develop practical skills in Conflict Prevention, Conflict Management, and Post-Conflict Recovery. Within this course framework, participants spend time learning how to respond to explosive threats, with a particular focus on IEDs, as well as mine action.

They will receive training from those with many years’ experience such as IED specialists. The specialists will come from groups such as UNMAS who have had a lot of experience in counter-IED tactics, particularly involving the use of mines across the African continent.

FDRE-PSTC also identified challenges to C-IED in the countries they assist. These challenges included public awareness and victim assistance. Ethiopia was said to not have enough equipment for MEDVAC – medical evacuations for IED victims. Ethiopia Defense Forces are also reported to have “no specific search equipment”, whilst many of the forces trained are reported to rely on UNMAS to clear the roads used.[i] In terms, of FDRE-PSTC’s own operations, they identified a “shortage of military or civilian experts” and a shortage of budget to procure equipment and develop human resources for C-IED.[ii]

Ethiopia provided troops to AMISOM forces operating in Somalia. Cooperation between Ethiopian and Kenyan forces in AMISOM has seen al-Shabaab pushed out from some of their major strongholds in southern Somalia.

Ethiopia is an active partner in PREACT. PREACT efforts to improve partner nations military capacity saw the provision of new communications equipment to the Ethiopian military, as well as training and a communications advisor in 2013. Between 2009 and 2013, PREACT saw $19.8 million funding for work in Ethiopia. Ethiopia is a focus of the PREACT activities due to its border with Somalia.

As a member of the Eastern and Southern Africa Anti-Money Laundering Group, Ethiopia has attempted to improve its poor history of monitoring terrorism financing.

As a member of the Intergovernmental Authority on Development (IGAD), Ethiopia has participated in IGAD’s counterterrorism training and programs.

The efforts of the GCTF – Horn of Africa (HOA) Capacity Building Group have seen Ethiopia participate in plenary meetings and exchange views on countering terrorism and violent extremism in the region. In 2013 they hosted the meeting and have participated in the ones since.

[i] According to the Japan Ground Self Defense Force / FDRE-PSTC questionnaire response.

[ii] According to the Japan Ground Self Defense Force / FDRE-PSTC questionnaire response.